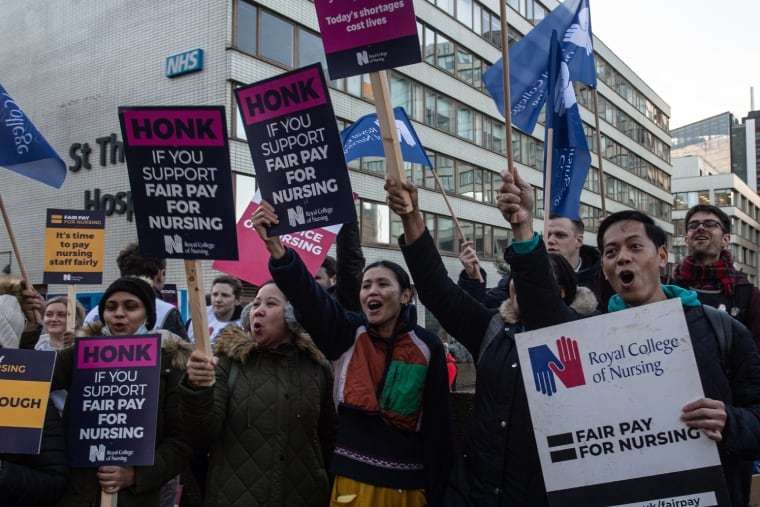 Trade union leaders are moving towards calling a unified day of strikes that could involve over a million workers on Wednesday 1 February. The plan is another sign of just how much is changing— and the potential for powerful struggles to transform British politics.

A united day of strikes can become a focus for the whole working class, whether they have voted for strikes or not or even whether they are in a union or not. Every activist should push for it and build it as big as possible with mass picketing, marches and militant protests.

But the union leaders’ vision is still very slow and narrow. Left to themselves, it will be largely passive and the end of a process rather than a beginning.

Last week senior figures from around 20 unions met to discuss whether some sort of joint action was possible. Those in the room included representatives from the CWU, PCS, NEU, NASUWT, Unison, GMB, Aslef and FBU unions.

Most of them were for a one-day strike on 1 February. However, several are waiting for ballot results. The NEU vote involving hundreds of thousands of teachers closes on 13 January. That’s just in time to give the 14 days’ notice demanded by anti-union laws for 1 February—if union officials moved quickly. The NASUWT teachers’ union vote in England and Wales ends on 9 January.

But, for example, the FBU firefighters’ union ballot continues until 30 January, so they won’t be called out on 1 February.

The union leaders last week agreed to reconvene on 10 January when a final decision could be made. A senior union executive member who knows what happened told Socialist Worker, “Everyone can see that there are important decisions coming. Will there be deals in the rail and the post, and can the nurses break through?

“Some of those who have been out a while feel they could do with a bit more support to get over the line and win something. But most union leaders are also keen to have attention for their particular action so they are not sold on the idea of united strikes being the main way forward.”

There is a real shift taking place. Hundreds of thousands of workers have already been involved in strikes this year. The Office for National Statistics said on 13 December that 417,000 working days were “lost” to strikes in October. This is the highest since November 2011 which saw a strike by 2.5 million public sector workers over attacks on pensions.

Between June and October this year, there were more than 1.1 million strike days, the highest in a five-month period since early 1990. And these figures always underplay the actual number of workers involved because they are reliant on employers’ reports.

But what’s marked is how little the union leaders have shifted to match the new possibilities. No union leader, whether notionally left wing or right wing, has put out a call for real action to support NHS workers.

The RCN nurses’ union has organised strikes across large areas of England and Wales for the first time in over a century. But that extraordinary fact, and the depth of social crisis that it reflects, caused hardly a stir among general secretaries.

There have been no official national call-outs for real solidarity on picket lines or support rallies or demonstrations. Why haven’t the union leaders pushed for workplace actions—at least during breaks—to support the nurses and ambulance workers? Why not go further and encourage workers to head to the RCN, GMB, Unison and Unite NHS picket lines?

The answer is the union leaders’ fear of anything that might be seen as breaching the anti-union laws. There have been some impressive support rallies and pickets, but only because of the initiative of local trade unionists and campaigners.

The Financial Times columnist Sarah O’Connor wrote this week that, “As we reach the end of the year, it’s hard to argue 2022 has been a good one for workers. Global wages fell in real terms this year for the first time since comparable records began.

“In the UK, a decade of stagnant wage growth before the pandemic is now set to be followed by the steepest fall in household living standards in six decades, according to official forecasts. This doesn’t look like a wage-price spiral to me. It looks like a living standards bloodbath.”

We need victories. Everyone should push to make 1 February a reality and for it to be a launch-pad for the escalating and all-out strikes needed to guarantee success.

Tony Cliff, the Socialist Workers Party’s founder, wrote that a mass strike “accentuates all the strength of the class” but also “all its weaknesses—the influence of bureaucracy, ideological immaturity.”

Let’s fight for a big strike on 1 February—and for it to be a decisive shift to a higher level of struggle.