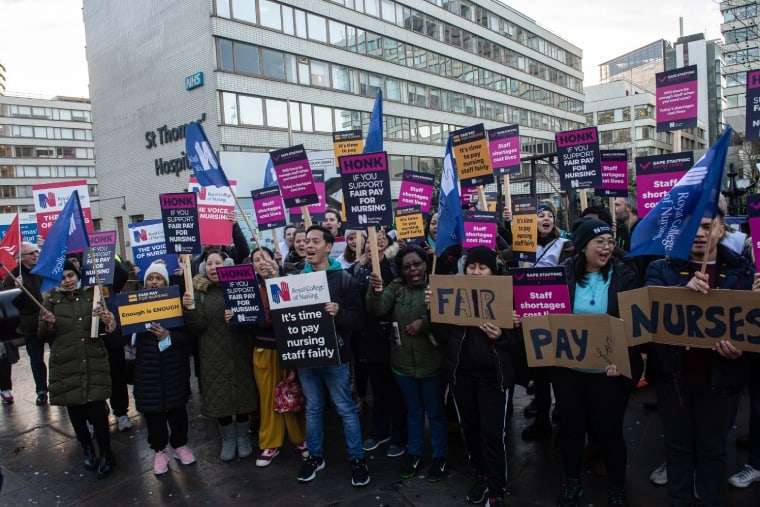 Thousands of nurses hit picket lines for the second time in a week on Tuesday after the Tories again refused to reopen talks over pay. The RCN union organised strikes at hospitals in England, Wales and Northern Ireland after it rejected a pay rise averaging at just 4 percent.https://socialistworker.co.uk/tag/rcn/

Nurses are demanding a pay rise of inflation plus 5 percent in order to stem the exodus of workers out of the NHS. Unions have set a deadline of Friday for ministers to agree to pay talks, otherwise they will announce new, harder-hitting action from January.

Althea, a nurse at St Thomas’ hospital in central London, told Socialist Worker, “It feels more serious being on strike today. The first day was all new and the feeling that we would have a better offer from the government. But that has not happened.

“I’m very disappointed at that, because there was a lot of support for our strike. If it stays like this, then we are going to have to have more strikes. And like the RCN has said, we will have to call out more people next time.

“I don’t like the thought of this but we have no other way to get better pay and to make sure the health service has enough staff, staff who stay and are happy in the job.”

The Tories greeted Tuesday’s strikes by again refusing to talk to unions about pay. Prime minister Rishi Sunak went further, saying it was “too late” to improve NHS pay and that the issue is “basically finished”.

And, he accused striking health workers of “causing disruption to people’s lives” and having an “impact on their health”. But it’s the Tories, not strikes, that are putting people at risk. Years of cuts and underfunding have decimated the service.

Nottingham Hospital on Monday declared a “critical incident” and cancelled operations— even those to treat cancer.

NHS managers use these emergency measures when hospitals are close to being overwhelmed. At the time there were some 80 patients waiting for a bed in A&E.

The North East ambulance service also declared a critical incident with 258 patients waiting for an ambulance. Handover delays at major hospitals meant that dozens of ambulances were kept off the road.

London Ambulance Service also reported a “Business Continuity Incident”. Michael, a paramedic, had come to the St Thomas picket line to offer support. “Tomorrow, I will be supporting the ambulance strike. I know we will get a lot of stick and be told we are uncaring. That’s a long way from the truth,” he said.

“The service is already in crisis and we need action to make it better, to save it. Something has to change in this country because everything is going down. It is getting worse for everyone and the government doesn’t care. It probably needs us all to take action together.”

Strike reports from across England and Wales also showed a determined mood. In Nottingham, Richard reported that picket lines at Queen Mary Medical Centre were “absolutely rammed” and that there was another big line at the City Hospital nearby.

Nurses at the Royal Orthopaedic Hospital in Birmingham were buoyed by passing motorists as they chanted, “What do we want? Fair pay. When do we want it? Now”. In Liverpool, RMT rail workers joined the picketing at Alder Hey Children’s Hospital to show their solidarity.

And areas where the RCN is yet to call strikes were keen to get in on the action too. In Chesterfield a local nurse joined with FE students to drop banners from a bridge over a busy road.

Strikers are clear that their action is about pay, but also in defence of the NHS and its patients. Holly, a nurse at the Singleton Hospital in Swansea, told Socialist Worker she was on strike because of the need to “retain staff and save the NHS”.

When and where are the ambulance strikes?
Read More

She was backed by Helen, a nurse at Guy’s hospital in London. “Every day is an emergency now,” she said. “It used to be occasional days when I wondered if I could cope. Now it’s every day. I used to look forward to going to work. Now I do it with a sense of dread.

“I’d like government ministers to spend a day with me and then see if they still said we don’t deserve more money. I think they are going to try to hold out, hoping that we will run out of steam.

“I’m not going away and I know lots of others won’t either. But we might have to do more than we are at the moment.”

The pressure on the Tories is not about to ease up. But don’t expect any help from Keir Starmer’s Labour Party. He has again banned shadow ministers from attending picket lines and instead sent out shadow health secretary Wes Streeting to insist decent pay is “unaffordable”.

Streeting has gone further, relishing a chance to take on combative health unions while pushing even more privatisation on the service. The health strikes ought to be warning to him of just how popular fighting for the NHS continues to be.

On Wednesday ambulance workers across Britain will take to their own picket lines as members of the GMB, Unison and Unite walk out. All trade unionists need to ensure they feel the same warmth and support that has been given to the nurses. Health workers stepping up the action and striking together is the best way to win over pay and to defend the health service.