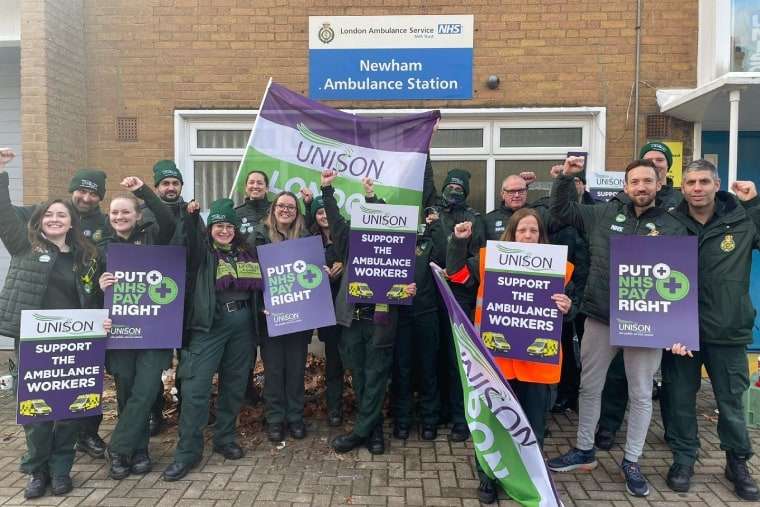 Thousands of ambulance workers in the GMB, Unison and Unite unions struck on Wednesday as part of a fight for pay and to keep the health service alive.

On picket lines, emergency crews have described the horror of working for a service on the brink of collapse, with patients suffering needless pain because of years of Tory cuts and privatisation.

They tell of whole shifts spent trying to hand over just one patient at hospital knowing all the while that hundreds of people are waiting desperately for their help. And, they say that situation makes them sick with stress—compounded by worries about how to pay their soaring bills.

At an ambulance station in east London, a Unison member told Socialist Worker, “This has been a long time coming and it’s because the crisis in the health service has been getting worse and worse.

“I have been in the job for years and at one time it wasn’t unusual to be on the road for 20 or 30 years. But not now. People qualify and then in a few years they’re off. They just don’t want the stress and the low pay. We lose good people, the NHS loses good people, and the public are left without the cover they deserve.

“You can talk about medical improvements and discoveries and achievements. But they need people to deliver them. This is what got us through the pandemic, and then we’re shafted. The Tories never start from people. That’s the trouble.”

Tory health secretary Steve Barclay doesn’t care about any of this though. He wrote in the right wing Daily Telegraph newspaper that by striking ambulance workers had made a “conscious choice to inflict harm on patients”. That’s a filthy lie—and Barclay knows it.

It’s the Tories’ refusal to even discuss pay that has led to the strike, and to the nurses’ action the day before. Unions have bent over backwards to ensure that all life-threatening emergencies are covered and have run 999 services directly from their picket lines.

Steve Thompson at West Midlands Ambulance Service is furious with the health secretary. “If Barclay was a doctor and the NHS his patient, he’d be struck off,” the Unite union rep told Socialist Worker.

But, he says, Barclay’s insult is a sign of growing Tory frustrations. “They’ve got no idea about how to deal with the NHS strikes, so now they are pointing the finger at the unions when they know this mess is their own fault,” he said.

“We’ve got to hope that by taking action we’ve helped the public realise this government is not fit for purpose.”

Over one million workers could strike on 1 February
Read More

At another east London station, a Unison member agreed. “I can understand why the union wants to keep public opinion onside. But I wish we were a bit bolder,” they said. “I’m actually glad we are on strike, because without that we’d have no publicity, no sense of doing something about the crisis.

“Let’s say it loud—it’s good to strike and to defend the NHS.”

That’s a message that all unions should be repeating. But Unison leaders have been far less strident, using officials to police picket lines. At some stations in London they even prevented other trade unionists from bringing solidarity greetings.

This they say is to ensure safe emergency cover can be run from stations. In reality, the move reflects a defensiveness and fear that unions will be blamed if tragedies occur during the strike.

But in London, and across the country, strikers told Socialist Worker they were keen to embrace solidarity and ready to fight alongside nurses and others that are in pay battles. That spirit is key to the success of the dispute.

No one should fall for the lie that unions are to blame as every non-strike day brings a new horror story. Tuesday’s newspapers reported the case of a 93-year-old pensioner left lying on the floor in agony with a broken hip for 25 hours before an ambulance arrived.

That case, and so many like it, are the direct result of the government’s austerity policies so eagerly endorsed by Barclay. This week the respected Health Service Journal reported senior NHS managers saying whole parts of the service were nearing breakdown.

“It’s not creaking, it’s collapsing in part… the worst I’ve ever seen it,” they said.

A GMB union member in Wimborne said that striking was the only way to protect the ambulance service. “It’s the only option left open to us to keep the service a safe one, which it isn’t at the moment,” they said. “We sit for hours with very sick patients in the back of ambulances and it’s heartbreaking for us.

“We drop those patients at an emergency department and go to pick up another one. But when we get back to hospital we see that the previous patient is still on a trolley waiting to be seen. Something has to give. The government needs to listen to us.”

Dan, an ambulance worker in Sheffield, supports that view. “If we don’t keep up action it means more Tory cuts and staff leaving,” he told Socialist Worker. “That means there will be a knock-on effect on patient safety. Our trust spent £15 million hiring private crews last year. That’s money straight into the pockets of shareholders.”

Winning a decent pay rise for ambulance workers is a vital part of defending the service. That means no union should accept a deal that is less than inflation—and it really should be higher to make up for years of declining pay.

Pay cuts in real terms are an insult to strikers. Such a deal would do nothing to help recruit the thousands more people the NHS desperately needs. That is the conclusion already drawn by nurses and midwives in Scotland.

Nurses have voted by 82 percent to reject the Scottish government’s “final offer” that averages 7.5 percent across the workforce. Almost two-thirds of midwives in the RCM union in Scotland also rejected the deal.

They join members of the GMB union that have also thrown out the offer.

The Tories are desperately weak and unpopular. But health workers’ strikes have been met with a wave of public support.

Unions must press home their advantage by building on this week’s strikes with more, hard-hitting action. Another ambulance strike is scheduled for Wednesday of next week involving GMB members.

As Steve from the West Midlands says, “To win this, we’ve got to match the Tories’ resolve. We know they want to break the NHS and replace it with an insurance-based model. I believe the resolve from our members to stop them is there.”