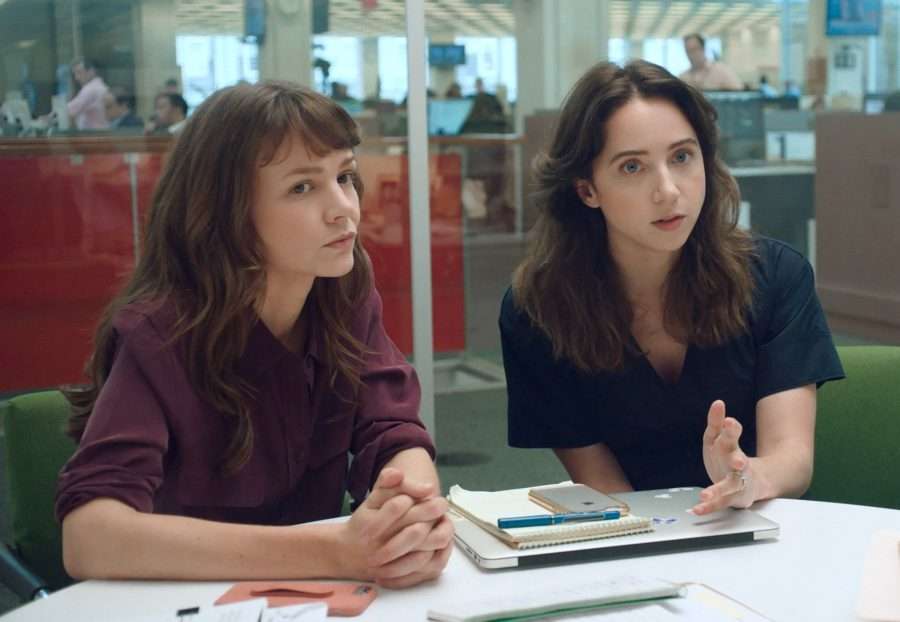 She Said, the new film about the exposure of Harvey Weinstein, keeps its focus on the disgraced movie producer and poster villain for #MeToo — but misses a chance to expose the “girl bosses” who protected him for years.

Still from She Said. (Universal Pictures)

Maria Schrader’s She Said, a feature film based on a book by New York Times reporters Jodi Kantor (Zoe Kazan) and Megan Twohey (Carey Mulligan), about their 2017 investigation that helped bring down Harvey Weinstein, is a decent, at times even inspiring, movie about women journalists helping workers to expose a horrible, exploitive, and very powerful boss. Weinstein, the disgraced megaproducer accused of either harassment or assault by some seventy women, reached millions of dollars’ worth of settlements with more than thirty of them after exposés by the Times, as well as the New Yorker. He has come to symbolize the worst of male boss behavior and is now serving prison time for rape.

While public curiosity naturally centered on the famous actresses accusing Weinstein of sexual assault and harassment — including Ashley Judd, Gwyneth Paltrow, and Rose McGowan — the movie commendably gives more attention to the unfamous and powerless assistants who suffered under Weinstein. It also conveys the structural powerlessness many women experienced: although he was, as a sexual predator, exceptionally brazen and ruthless, Weinstein was also like many American bosses in that he ran his workplace as an absolute dictatorship, with workers terrified to defy him.

That said, She Said has some blind spots typical of liberal entertainment media: a lionization of mainstream journalism and, more seriously, a failure to reckon fully with how deeply girl-boss feminism is implicated in the Weinstein story.

The movie continues the relentless propagandistic journalism hagiography that has been culturally voguish of late — a trend we have written about before — and in that spirit, She Said makes the Times itself too central to a story that should instead focus on the experience of working for Weinstein. Kanton and Twohey did great work on this story, but there’s nothing especially fascinating about these journalists and no reason to make them the main characters.

Since the movie came out, Weinstein has come to symbolize, for liberal feminists, everything wrong with patriarchy — or, as they less precisely tend to call it, “misogyny.” But their brand of feminism must bear its share of the blame for enabling malefactors like Weinstein.

Let’s first recall that Weinstein’s studio, Miramax, was associated with mainstream-yet-edgy films whose sensibilities were more notably feminist than standard commercial Hollywood. He made movies directed by women and about women, as he pointed out in 2019 in an interview with the New York Post shortly before going on trial for rape in Manhattan. For this reason, many powerful women directors and producers overlooked or enabled his abuses and even covered for him, as Ronan Farrow’s reporting for the New Yorker showed. Donna Gigliotti, director of Miramax’s 1998 hit Shakespeare in Love, for example, discouraged Farrow from writing the story but Farrow later learned that she had known about Weinstein’s abuses for decades.

Weinstein was a major ally and Hollywood ambassador for Hillary Clinton, a figure who, along with her loyalists in the media, has long cast support for or opposition to her personal political ambitions as an important gauge of an individual’s feminist credentials. Weinstein was a major donor to each of Clinton’s campaigns — Senate and presidential. He gave far more money to Clinton — both as a donor and as a bundler (raising money from other donors) — than to any other Democrat. They were also socially friendly: it’s easy to find numerous warm and festive photos of them partying together, like this one and this one. When Weinstein’s extensive crimes came out, Clinton brushed it off, but many assumed she must have known.

There’s almost no question that Clinton had at least heard the rumors. Farrow reported that Lena Dunham, the creator of Girls, knew about Weinstein’s actions and had warned Clinton’s campaign staff that he could be a political liability for her. “Harvey is a rapist and this is going to come out at some point,” Dunham said, accurately, in an exchange that doesn’t reflect well on Clinton or her campaign.

Nor does it reflect well on Dunham, but at least she’s been honest about it. Dunham has written that in 2016, the year before the Times story broke, she performed at a Weinstein benefit for Clinton, and shook his hand, despite having “heard the rumors.” Dunham called the evening “a betrayal of my own values,” writing in 2017, “I’m sorry that I shook the hand of someone I knew was not a friend to women in my industry.”

She Said offers some intriguing glimpses of the role of such girl-boss feminists in covering for Harvey. In one scene, a woman gets a call from one of her former bosses, and a female voice urges her not to talk with any journalists about Weinstein; the call angers the recipient, who then picks up the phone to return the Times reporter’s call.

Another scene rightly nails Linda Fairstein, the former Manhattan district attorney once celebrated for her dedication to prosecuting sex crimes, showing her taking a call from Twohey, who asks her bluntly about her role in quashing a criminal complaint about Weinstein. Fairstein became infamous as an icon of carceral feminism for her role in the case of the Central Park Five, a group of black teenagers who ended up falsely convicted of raping a white woman in the park in 1989. Fairstein was shown to have engineered false confessions from the boys. An appeals court judge described her conduct in unusually strong terms: “I was concerned about a criminal justice system that would tolerate the conduct of the prosecutor . . . Fairstein wanted to make a name for herself. She didn’t care. She wasn’t a human.”

Fairstein’s enthusiasm for prosecuting accused rapists apparently did not extend to her powerful friends. The Times reporting showed that Fairstein intervened to help kill a complaint against Weinstein in 2015, when she was no longer district attorney but still well-connected in the office. Fairstein, despite being willing to ruin the lives of poor black teenagers accused of sexual violence, not only used her connections to help Weinstein get out of trouble, but also provided consultation to his legal team. She had written about her dreams that Weinstein would buy the rights to her books. The place of Fairstein in the Weinstein saga, however, is only fleetingly rendered in She Said.

She Said is a good movie — a well-paced thriller that gives us a solid appreciation of the important work of investigative journalism and of the horrific hell that bosses force women to endure. But given the Weinstein story’s central place in the canon of liberal feminism, it’s long past time to interrogate the role that its iconic girl bosses played in this disgraceful saga. Sadly, She Said gives them short shrift.