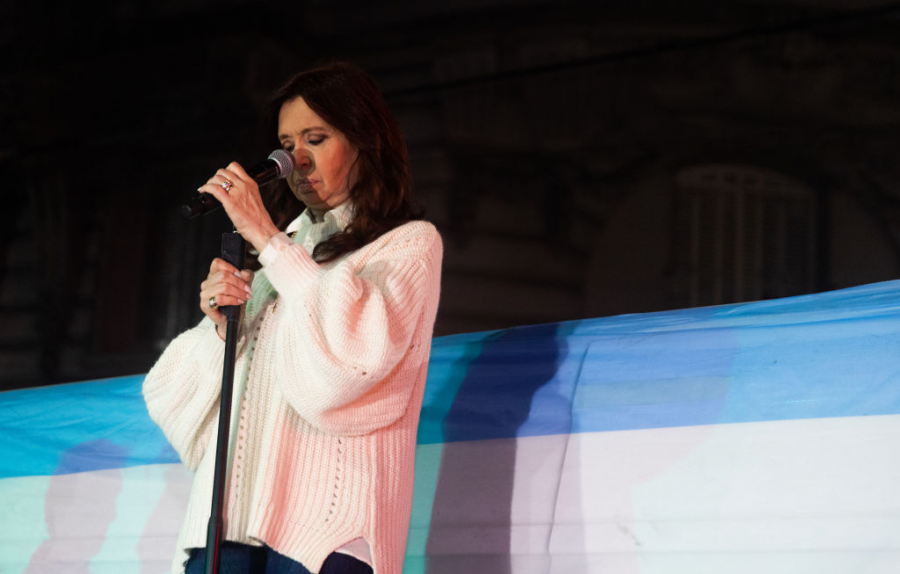 With her sentencing on corruption charges this month, Argentine vice president Cristina Kirchner has become the latest victim of right-wing “lawfare.” Kirchner has declared she won’t seek public office again — meaning a murky future for her populist movement.

Earlier this month, Argentina was rocked by a story so big that it broke through the country’s jubilant anxiety over the World Cup — the vice president, Cristina Fernández de Kirchner (or CFK, as she is commonly called in the Argentine press), was found guilty by a judicial tribunal in a massive corruption scandal over money laundering during her term as president from 2007–2015 and sentenced to six years in prison.

The prosecutorial tribunal’s formal verdict is that CFK knowingly funneled over $1 billion to a construction company owned by businessman Lázaro Báez, a friend and ally to her and her husband, former president Néstor Kirchner, during their presidencies. During their leadership of the state of Santa Cruz as well as their presidential terms, Báez laundered more than $55 million from the provincial and federal governments for construction, including for Néstor Kirchner’s mausoleum. Báez is already serving a twelve-year sentence for this scandal, having been convicted in February 2021. CFK’s recent sentencing is an outgrowth of these same investigations.

But CFK isn’t just a politician — she’s the central representative of the populist movement that currently holds the presidency. Her sentencing therefore has massive political ramifications for the people and the politics of Argentina. In her video response to the decision, CFK argued that “they [the tribunal] aren’t coming for me. They’re coming for you.” In other words, CFK is claiming that the scandal is a hoax designed to stymie progressive Peronists and the coalition that holds them together, pointing to connections between the judges who sentenced her and Argentina’s right-wing opposition.

Because in Argentina criminal sentences are issued before judges present their arguments for them, we have relatively few details about the judges’ rationale for their decision besides the charges they’ve brought, other than that there were chats among people in her government about “cleaning up” their corruption before the end of her presidency. CFK denies that any money laundering took place and maintains that she and her allies are the targets of an unfair system of legal persecution. Still, most independent observers agree that CFK has more money than she can reasonably account for, even if the case brought against her is dubious at best.

CFK has been a powerful figure for over twenty years in Argentine politics, first as an ally of her husband, Néstor, who was president from 2003 to 2007. Néstor stepped aside in 2007 to allow CFK to run for president, but remained her close adviser during her presidency, leading the two to draw comparisons to the Clintons as a paradigmatic power couple.

Néstor’s unexpected death in 2010 left CFK as the leader of progressive populist forces in the country, as she was reelected to the presidency in 2011. CFK was defeated in 2015 by the neoliberal candidate Mauricio Macri, but returned to the executive branch as the ally of current Argentine president, Alberto Fernández (no relation to CFK), both as members of the Frente de Todos (Everyone’s Front) party, the current manifestation of Argentina’s Peronist movement.

Peronism has always been a complex coalition that blends elements of the Left and the Right, from its foundation under Juan and Eva Perón in the 1940s to the present. Peronists have adopted political stances ranging from fascism to socialism, always with an anti-elitist, populist edge. CFK and her late husband represent a center-left populism, and she spent much of her presidency legislating against US “imperialist” capitalism and passing protectionist economic policies. They made headlines for implementing the most protectionist trade measures in the world and for limiting access to dollars in an effort to stabilize the country’s economy and protect the livelihoods of the poor. The Kirchners identified themselves as politicians directly concerned with the economic prospects of the country, just as Perón himself had done.

But Peronism is bigger than the Kirchners. The Frente de Todos, CFK’s current party, is a Peronist unity party designed to unite CFK’s progressive formation with more centrist and right-wing Peronists. President Fernández himself is a go-between for these factions, and brokered an alliance with one of the Kirchners’ biggest Peronist rivals, Sergio Massa, to join the government to defeat then president Macri.

The last few years have been difficult for CFK and her coalition. Despite being members of the same party and, ostensibly, both Peronists, CFK and Fernández have had many very open disagreements and are now barely on speaking terms. Even worse, her recent legal troubles come after she survived an assassination attempt this September, in which a member of a far-right organization attempted to shoot her in the face on live television after she’d given a speech in the wealthy Buenos Aires neighborhood of Recoleta. Clips of the event show her would-be killer, Fernando André Sabag Montiel, pointing a gun at her head; CFK was only saved by the fact that the assassin’s gun happened to misfire. The legal case against Sabag Montiel and his allies, a network of white supremacists and Nazi apologists, is ongoing.

CFK’s sentencing has also won her some support from others on the Latin American left who identify her prosecution as part of a larger anti-leftist trend. It’s been condemned as “lawfare,” a term coined in the 2010s to refer to conservative and right-wing political forces zealously using legal systems to attack the leaders of populist and left-wing movements.

Scholars agree that lawfare has become a popular way for conservative and right-wing forces in the region to get rid of political opponents without staging coups or supporting popular uprisings. One prominent example of lawfare was the removal of Dilma Rousseff, Brazil’s first female president, from power in 2016. Rousseff was ousted in what has come to be called a “parliamentary coup,” in which members of her cabinet voted for her removal and installed the right-wing Michel Temer as a placeholder until the elections two years later. As Rousseff had been removed from office, she could not run as an incumbent, paving the way for Jair Bolsonaro’s victory in 2018 over Rousseff and former president Luiz Inácio Lula da Silva’s surrogate candidate, Fernando Haddad.

Rousseff was among the first prominent politicians in Latin America to express solidarity with CFK over her sentencing, drawing parallels between their two cases. Other left and center-left politicians in Latin America have followed suit, calling CFK’s sentencing an act of political violence against the people of Argentina and Latin America in general. Brazilian president-elect Lula and former Bolivian president Evo Morales, both having been in similar positions, also expressed their solidarity.

As with most high-profile cases involving politicians, this corruption scandal isn’t likely to put CFK in jail anytime soon. Her position as vice president protects her from arrest, giving her protection until December 10 of next year, when her and President Fernández’s term ends. She also has the right to appeal the decision of the court, which will likely delay any final result for several years, if not longer. The immediate consequences of this decision are political rather than legal. While no surprise to the Peronist coalition, her sentencing is a serious blow to the always shaky alliance among populist forces in Argentina. CFK has said that, as a result of this decision, she will not be seeking a second term as vice president, nor will she stand for any other public office.

By pushing one of the country’s most popular, if controversial, figures out of politics, this case has blown open the possibilities for the Peronist coalition and Argentine progressives for the upcoming elections in 2023. This has raised speculation that there will be further infighting among Peronists over who will seek the presidency in 2023. President Fernández has said that he will seek reelection, but that likely won’t stop his fellow Peronists from seeking the same position. Other likely candidates include Eduardo de Pedro (Wado), currently the minister of the interior, and Massa, currently the country’s finance minister and a former candidate for president with his own centrist Peronist party.

CFK’s prosecution and sentencing raise important, difficult questions for progressives and the broader left in Argentina, Latin America, and the world. As the avatar for a populist movement, CFK has been able to enrich herself knowing that she would have millions of people rally around her if she were to be prosecuted, people who correctly understand that they depend on her and her political power for their own well-being.

The fact that this particular case represents judicial targeting is obvious, but the trouble is that the kind of financial irregularity the tribunal argues that CFK engaged in has very likely happened at some point in her career. CFK’s sentencing, and the damage it will likely do to progressive forces in the country, is more than a condemnation of her as a president or political actor — it’s a warning about what can happen when a single person embodies a political movement.