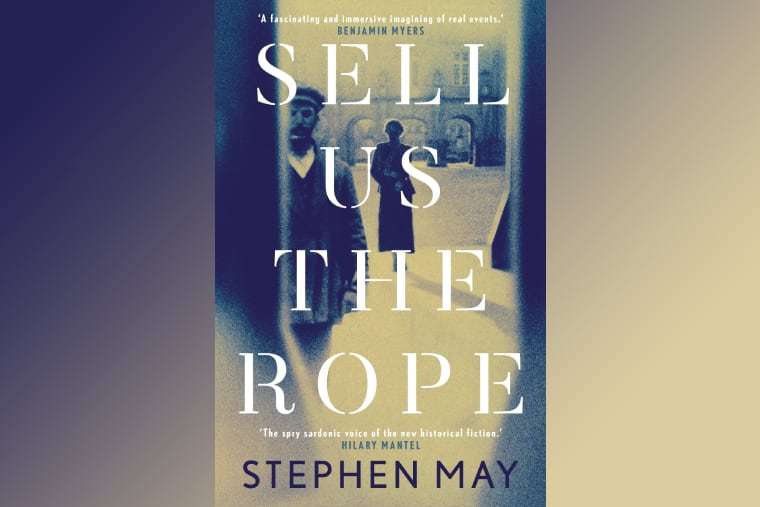 Sell Us the Rope by Stephen May

A great quote. But, in truth, the quotes are both from reminiscences of people who had heard Lenin speak and there’s no actual record of him writing the words. This goes to the heart of Stephen May’s set up—a fictionalised version of real events—and what we can take as truth or invention. In this case, London, May 1907, and a gathering of Marxist revolutionists.

Lenin, Joseph Stalin, Rosa Luxemburg, Leon Trotsky and Maxim Gorky are all here at the 5th Congress of the Russian Social Democratic Labour Party in the Brotherhood Church in Hackney, east London. This real setting then introduces us to May’s “Koba”, our main character. Koba was Stalin’s pseudonym taken from a heroic figure in Georgian folklore.

The conference is dominated by the internal conflict between the Bolshevik and Menshevik wings of the party. Following the 1905 Russian Revolution, the Tsar had implemented constitutional reforms and set up a consultative parliament (Duma) but left himself as supreme leader. And now the two wings of the party battle over their future direction—either a full-throated assault on the system or compromise. More than 14,000 people had been executed and 75,000 imprisoned in the 1905 uprising, so the stakes are high.

Unfortunately, while this is the backdrop to the novel, it is a novel and so May focuses on characterisation. But that isn’t to say that the book doesn’t give us something to get our teeth into. As soon as “Koba”, and revolutionary companions Mikhail Tskhakaya and Stepan Shaumian, step off the ferry in Harwich quay we witness the abject social conditions of the working class. On arriving in London, May gives us, “The under-sized, misshapen people, the tired and skinny livestock. The children still, dead-eyed and sullen, or, alternatively, running and pushing or shrieking like supercharged geese through the crowds.” And the “distended bellies of the children… living in … stink and uproar.”

Koba takes up residence for the conference in fetid lodgings in Tower House, Stepney, and takes under his wing the young Arthur Bacon, the son of the landlord. Arthur, with his abusive father, reminds Koba of his relationship with his own father—whom here he has killed. Koba is an outsider—a Georgian having to fight for a right to even be at the conference. He’s uncomfortable with other comrades, many of whom he holds in contempt, and with relationships with women, which he isn’t good at. He also sees ghosts, saying, “Everyone you kill hangs around, plucking at your sleeve, wanting to be acknowledged, refusing to be forgotten.”

The book, however, comes into its own with the introduction of our other central character, a Finnish lathe operator delegate, Elli Vuokko. Elli is a force of nature and becomes friends with the older and most formidable Rosa Luxemburg. The women conference delegates start the day with calisthenics, martial arts and weapons training. It’s courtesy of Edith Garrud, the real-life jiu-jitsu instructor to the Women’s Social and Political Union (WSPU).

Elli and Luxemburg’s discussions on sexism and the lot of women are fantastically written. They discuss the drudgery that will be cast off after the revolution and how the bourgeois straightjacket placed on women is not for them. Live hard, fight for revolution and take what lovers you wish for.

Elli and Koba vie romantically with each other. And then throw in the Russian secret police—Okhrana—the hunt for party informers, and the schmoozing of the British left establishment for donations. The novel has plenty of drama, thrills, love and humour.

It is perhaps an odd conceit to put Stalin as our main character. The reader carries the knowledge of what he becomes—the destroyer of the first workers’ revolution of October 1917, the filler of the Gulags where millions died. And yet there is a fascination with how someone so monstrous could be created, the decisions made and actions taken.

At the heart of what May asks is the question, was Stalin a psychopath or a product of material circumstances? One reviewer said, “All historical novels are speculative, but some are more speculative than others.” And readers may find this novel goes too far. May’s historical endnote does provide a satisfying list of how many of the characters were actually real people.

Historically, I would direct people to Trotsky’s History of the Russian Revolution. However, as a work of fiction this is an immersive read, Sell Us the Rope has much to enjoy and a dark thread of humour.