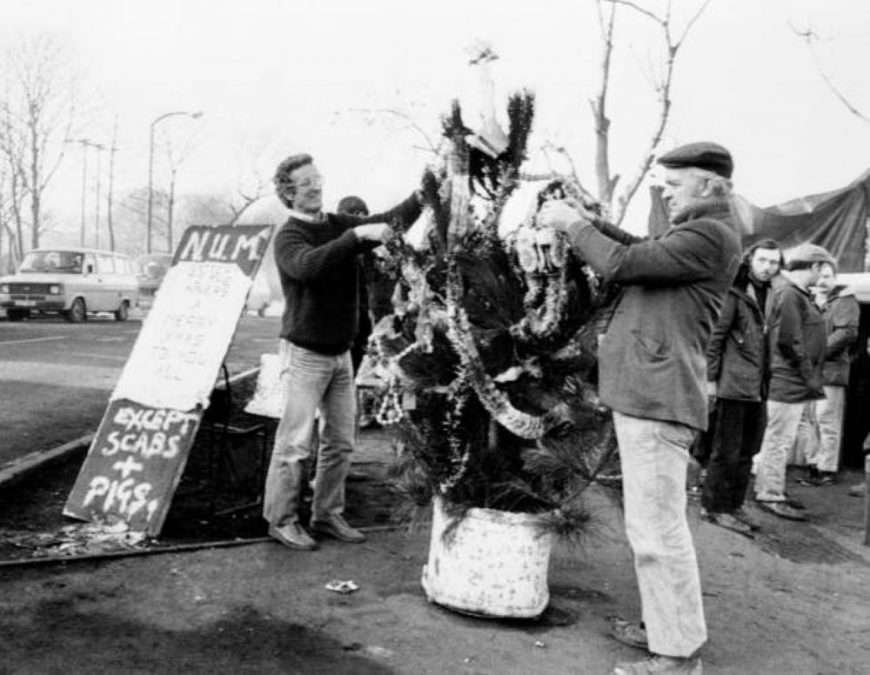 By December 1984, Britain’s miners had been on strike for nine months – but local and international solidarity brought them everything from turkeys to children’s toys, and stopped even Thatcher from crushing their festive spirit.

This year’s Christmas arrives amid freezing weather and widespread hardship. For many, the cost of living crisis that’s been a fundamental part of our national landscape for almost a year means scaled-down festivities, perhaps dependent on what’s been donated to the local foodbank recently. Years of stagnant pay and growing inequality that go beyond that current crisis mean that for others, Christmas is always a difficult time.

In the Britain of 1984, too, Christmas came as hunger was being weaponised by Thatcher’s government in an attempt to starve striking miners back to work. The true scale of the hardship they were facing was rarely understood outside of pit communities. Miners skipped meals they couldn’t afford and burnt furniture to keep warm after concessional coal supplies were withdrawn. Heather Wilson, whose late husband Gordon was a striking miner from Kirkcaldy’s Seafield colliery in Scotland, recalled in 2012 that ‘our income was so limited in the strike that we would have starved had it not been for the soup kitchen, friends and relatives and the local shops feeding us.’

For the government, by contrast, money was no object. Millions would be spent on militarised police forces, who earned thousands of pounds in overtime payments over the Christmas period. Miners have since bitterly recalled how officers would taunt them on picket lines by displaying £10 and £20 notes and speaking loudly about how much money they were making.

Adding to this was the news media, which focused relentlessly on the apparent records of ‘new faces’ returning to work in the run-up to 25 December. The same media placed more pressure on striking miners by featuring full-page advertisements and bribes of up to £1,500 before the Christmas holidays for those willing to break the strike. Despite that, the vast majority would stay out throughout Christmas and into the new year.

By this point, the miners had already held out for nine months in defence of their livelihoods and the communities that depended on them. That so many continued to last is a testament not only to their solidarity, but to the strength of those communities, which came together to keep families clothed and fed. At no point was this community spirit out in fuller force than at Christmas.

That year, support groups became a key part of making Christmas possible by organising Christmas parties and ensuring that every child got a present. At one party in Worsbrough Bridge Miners’ Welfare Club, 350 children were brought together for food and games, in an atmosphere that gave them and their families a brief respite from the pressure of the strike. Organised by Anne Scargill through the Miners’ Women’s Support Group, the event was paid for from a Christmas appeal that had raised the group more than £360,000 across the country.

It was these women’s support groups that spearheaded many of the efforts to keep their communities going at this time. Dot Phillips of the Newbridge Women’s Support Group in South Wales recalled in 2009 the vital role they played in creating a memorable Christmas and keeping morale high, despite the hardship:

We had a Christmas party with a Father Christmas. There were raffles. I can remember a fashion show, and an auction where various shops donated, anything that came into our head to raise money. It wasn’t vast amounts of money and food coming in but there was a really good sense of community and spirit.

Christmas also gave miners the chance to show the rest of the world that their sense of humour and festive cheer wouldn’t be lost, even out on the bitterly cold picket lines. At Celynen South colliery in Gwent, picketing miners greeted police on 21 December by singing Christmas carols and wearing party hats. NUM officials even dressed up as Santa Claus and offered plastic pigs to the 110 police on duty, although none was accepted.

Christmas cheer was helped with the distribution of tens of thousands of turkeys for Christmas dinners, paid for by support funds. In the North East, close to 17,000 turkeys were given out across the region from Murton miners’ welfare hall to the families of striking miners.

Waves of presents for children arrived from all around the world, often with messages of support and encouragement. Scottish miners and their families were amazed by the scale of the delivery of toys from France, sent with the message ‘300,000 colis aux enfants des mineurs Britannique. C’est notre solidarite’: ‘Three hundred thousand parcels for the children of British miners. That’s our solidarity.’ The parcels contained trucks, dolls, bears, prams, and games and would be sent from Edinburgh to mining communities across Scotland.

Such acts of solidarity told striking miners in Britain that they were not alone. Augustin Dufresne, General Secretary of the French miners’ union CGT, told Scottish miners that the gifts had come ‘from the bottom of our hearts’. For Dufresne, such solidarity was part of a wider conflict: British and French miners had the same cause, and he made it clear that victory for those in Britain would be a victory for their French counterparts. In North Staffordshire, the Area president Joe Wills said the vans arriving at Burslem Town Hall, filled with parcels from across the Channel, made it a ‘magic’ Christmas:

We were virtually buried by toys—it was like Santa’s grotto. The kids will do very well. It had always been our aim that the children should not suffer at this time of year.

Despite being of a scale never seen before or since, these displays of festive international solidarity barely featured in the news media. Instead, independent media picked up the stories. The Miners’ Campaign Tapes, for one, recorded gifts arriving at Broadsworth Miners’ Welfare Club in Doncaster from Gothenburg, Sweden, after first being blocked on arrival:

Customs stopped us and they wouldn’t let us in when they saw what our lorries contained. They talked about—‘this is for the miners, and we’ll try to do everything we can to stop you’. They said this bluntly to our faces.

Once the deliveries made it through—after a required payment of £745, to ensure the release of children’s toys—the filmmakers asked why the Swedish trade unionists supported British miners. A simple answer was given: ‘It’s a class reason. Workers support workers in their struggle.’

In this way, the particular hardship of the winter period also served as an opportunity to show and reaffirm the solidarity between workers and their families the world over. Speaking to students from Bristol University for the recording All Out, striking miners in Penrhiwceriber recounted the renewed sense of community the strike had brought at Christmas time:

Being on strike for ten months we’ve lost out money wise. We’re not worried about money. If we were worried about money we wouldn’t be working class. Twelve months ago, people had money to spend, so you didn’t care about your next-door neighbour then. But now you haven’t got money you’re beginning to care about your next-door neighbour. You’re beginning to care about the community, and that’s what we’ve got now, we’ve got a community and that’s why we’ll never lose.

Of course, the miners did eventually lose their fight, and their communities underwent a decimation from which they are still reeling today. For the media and establishment who cheered on that devastation, this year’s Christmas, coming after a summer and autumn of industrial action across the economy, is yet another opportunity to undermine the struggles of working-class people and sow division.

Some latch on to the fact it’s Christmas to decry the strikes by rail and postal workers, whose labour is vital in keeping us connected for our celebrations, and the strikes by healthcare workers, who keep us well in this season of sickness. These strikes, some say, throw other working-class people under the bus. But the lesson of Christmas 1984 is that we shouldn’t let the holiday season be used as a tool to pit workers against each other. In yet another moment of acute need for so many, the history of the workers’ movement shows it’s much more powerful as a time that can bring us together.