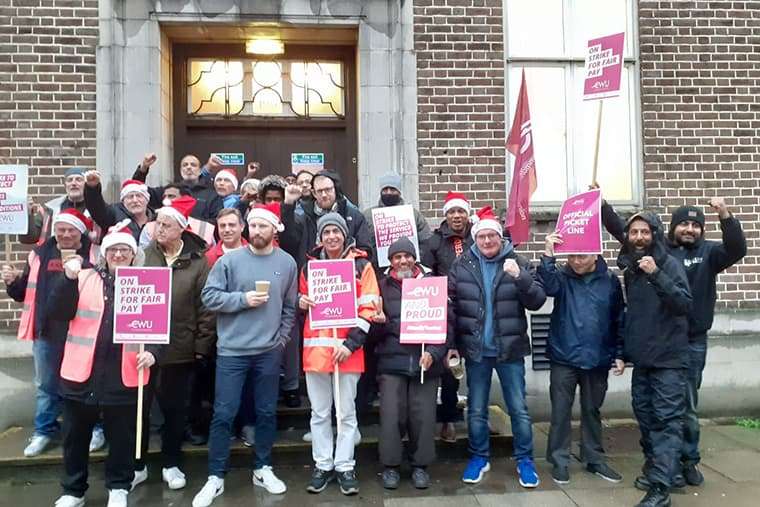 Festive cheer on the E7 picket line during the Royal Mail strike on Friday. CWU union members want to give CEO Simon Thompson the sack for Christmas

Royal Mail workers began their final two-day strike of the year on Friday—with a new strike ballot likely to take place in January. The CWU union members are deep into a bitter dispute to save the future of their jobs.

And, with Saturday set to mark their 16th day of strikes, mail has piled up in delivery offices and mail centres ahead of Christmas. One striker outside the delivery office in Gateshead told Socialist Worker, “Our CEO Simon Thompson says that when he goes into an office it’s clear.

“He knows fine well that the mail is there. But they’ll take him for a walkaround, and they won’t take him where the mail is. If you don’t see something, you can’t tell lies about it.”

He added that managers, in desperation, have responded by telling workers to prioritise delivering packages and tracked items over letters. It’s a glimpse at Thompson’s vision for the future of Royal Mail, where profitable parcels take priority, and letter deliveries are gradually abandoned.

“The frames in there are full of mail at the moment,” the striker said. “Yesterday not one letter went out with me because we had to take the parcels out, and only the parcels.

“We’re gutted in a way because we take pride in delivering to our customers. Every year on Christmas Eve there would be not a letter left in there or a parcel. And if we missed something we would go back with a card. What Royal Mail wants is, if there’s a pair of trainers to be delivered, it’s more important than a hospital letter.”

He added, “I had an argument with a manager during the pandemic. We were instructed to take parcels. I said we’re in a pandemic, there’s a hospital letter there. He said the parcel makes more money. That didn’t stand easy with me.”

Royal Mail executives are on a mission to force through a long-held ambition to smash up Royal Mail and turn it into a “gig-economy”-style parcels courier company. It’s something they and their shareholders have wanted for years—and now they’re going for it.

Just last week bosses boasted to the right wing Daily Telegraph newspaper that they had built up a “£1.7 billion war chest” to beat the strikes. That’s despite pleading poverty to justify their assaults. And they are pushing on with a tactic of victimising and suspending union reps for picket line activities.

“You’ve read about the £1.7 billion war chest,” another striker in Gateshead told Socialist Worker. “If they want to wreck the business, it seems they have enough money for that.”

“This was all planned before Covid. We had a manager in there before Covid and he said to me, in a few years’ time you’re going to own your own van, and your delivery will be franchised. And that’s where it’s going now.”

In a video message to strikers earlier in the week, CWU general secretary Dave Ward said that in talks, “the company is clearly starting to shift their position.” But, he added, none of the “big issues” in the dispute had been resolved.

At the beginning of this week, CWU union leaders offered to call off strikes if bosses agreed to some preliminary demands. These included no compulsory redundancies, no more agency staff, no worse conditions for new starters, and no increase in owner-drivers.

It means that workers will likely have to keep fighting into next year. CWU leaders plan to run another strike ballot from 23 January, following anti-union laws that say a strike vote is only valid for six months.

The CWU’s strike ballot over pay runs out on 19 January, while a second live ballot, over terms and conditions, runs out in February. That means they could still call more strikes.

But so far, there are no more dates for action after the second strike day set for this Saturday. Ward said the period between Christmas and New Year’s Eve, as well as early January, is “a natural break for us to get back round the table.”

Yet as one Royal Mail striker in Gateshead said, “The thing with the negotiations is the CEO hasn’t even been there for all of them. He sends his minions in. They might agree on a rough framework agreement with the union, then they go to see him and he just knocks it back. The only power we’ve got is to withdraw our labour. That’s it.”

The scale of the assault means that, though many workers say they’re struggling with losing pay on strike days, they’re determined to keep going. “I’ve got a choice,” one Gateshead striker said. “I could cross that picket line. But I won’t, because I care about my job, and everyone else’s job.”

He added, “We’ve always been friends, but the strike has brought us stronger together because we’re all in the same boat.” The fact that the Royal Mail battle takes place alongside many others means strikers know they have support too.

One striker in Gateshead said, “I think the government is pulling the strings behind the scenes. I think they’re telling the bosses on the rail, don’t talk to the unions.

“But I think the government has misread the whole thing. The driving examiners are out, the train workers, the ambulance drivers, the nurses, the firefighters are thinking about it. It’s virtually a national strike, it just needs to be coordinated.”