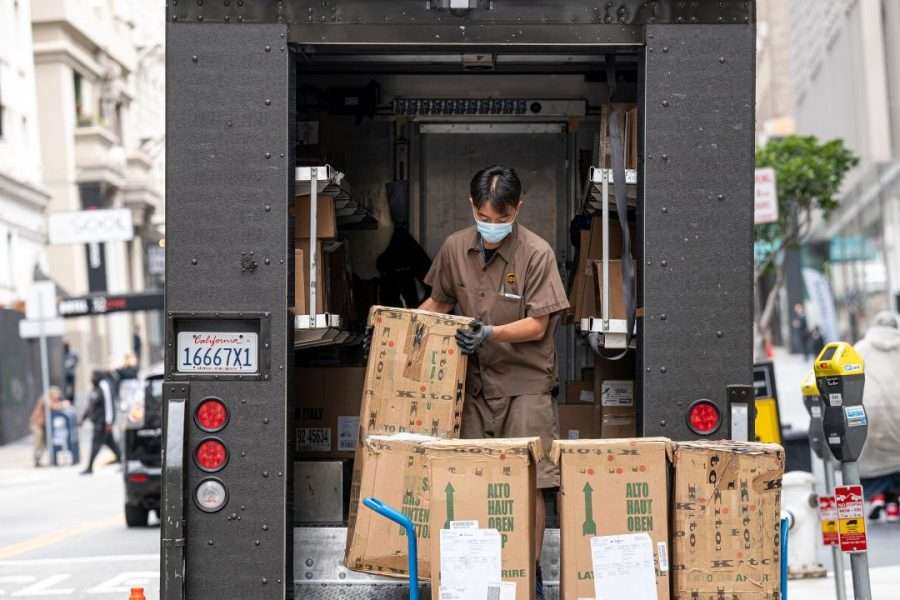 Logistics workers in rail, trucking, and warehouses labor hard to bring us our packages year-round. But their employers subject them to ruthless harassment, surveillance, and union busting. Their organizing efforts need our solidarity this Christmas.

What started as a humble mom-and-pop shop in a far corner of the North Pole is today unrecognizable. Mr and Mrs Claus have built an international logistics machine that operates 24-7 and that can get presents from one side of the globe to the other overnight.

But Santa’s elves say they haven’t shared in Santa’s success. “There are more gifts to make than ever before, but we’re still struggling to get by. And it’s only getting more expensive to live in the North Pole!”

Workers’ grievances extend beyond wages. One of Santa’s strategies for improving productivity is increased surveillance. Many elves complain that this has made their lives miserable: “He knows when we’ve been sleeping. He knows when we’re awake. He even has a metric for how much time we’ve spent ‘off-task’ and uses this number to discipline us,” said one workshop elf.

Equally troubling testimonies come from his reindeer, for whom Santa has installed sleigh-facing cameras. “This used to be a job where we could talk freely with each other and enjoy our reindeer games while we worked, but now everything we say or do could get us in trouble. We feel like robots.”

To address these issues, reindeer and elves have joined together to demand a tolerable work environment and fair reward for their labor. But as recent complaints filed with the Arctic Labor Board document, Jolly Saint Nick has refused to bargain in good faith. “He just told us not to pout and cry! And that we should be thankful we don’t have to work for the Grinch,” one elf said on condition of anonymity.

The North Pole Is Not Unique

From rail to warehousing to last-mile delivery, the logistics workers who bring us our packages year-round can tell you that the working conditions in the North Pole are far from unique. For United Parcel Service (UPS) workers, insufficient staffing means forced overtime, with shifts often lasting up to fourteen hours per day — many times in violation of union contract protections against excessive overtime.

Many workers are forced to work six-day weeks. And drivers often receive texts and calls from management during the day, pressuring them to pick up the pace. One of the most common forms of discipline is when drivers are told they were “over-allowed” on a route, meaning they did not complete as many stops per hour as an algorithm calculated they should have.

Among the long list of Amazon workers’ grievances are wages barely enough to live off of, meager benefits, a grueling pace of work, constant surveillance of productivity — all leading to an exceptional turnover rate, and horrific injury rates. And the company routinely breaks the law in an effort to hinder employees’ efforts to associate and bargain collectively.

Yet a wave of labor activity seems to be swelling in size and momentum. Up and down the company’s supply chain, workers at Amazon are organizing. There are the six hundred California workers who petitioned for and secured free transportation to their facility; the hundreds who successfully pushed the company to allow employees to keep their phones with them during their shifts; the Amazon Labor Union, which has won the first National Labor Relations Board election at an Amazon warehouse; and the countless other groups now trying to unionize.

Meanwhile, militancy has returned to the highest office of the 1.3-million-member International Brotherhood of Teamsters (IBT), which represents much of the country’s logistics and transportation workers. After twenty-three years of concessionary and undemocratic rule by Jimmy Hoffa Jr, a rank-and-file-led movement has propelled the Teamsters United slate with President Sean O’Brien at its head to victory. O’Brien campaigned on the promise to win an exceptional contract at UPS — where approximately 350,000 Teamsters make it the largest private sector collective bargaining agreement in the country — and to prepare for a potential nationwide strike in August 2023 to win it.

Among O’Brien’s goals for this contract are eradicating the two-tier driver classification negotiated under Hoffa, raising the wages of part-timers, and ensuring protections against subcontracting and personal-vehicle-driving gig workers. As many issues affecting UPS workers are also faced by workers at Amazon and elsewhere in the logistics industry, the impact of a strong Teamsters contract, and the potential spectacle of picket lines in nearly every populated region of the country, could have a secondary effect, drawing a line in the sand demarcating acceptable working conditions and encouraging others to follow suit.

From Santa’s workshop to Amazon warehouses, from North Pole reindeer to UPS Teamsters, the logistics workers who make sure we get our Christmas gifts are enduring brutal exploitation. But they are organizing for better wages, dignity on the job, and a real say in how their workplaces are run. The spirit of the season demands we give them our solidarity.