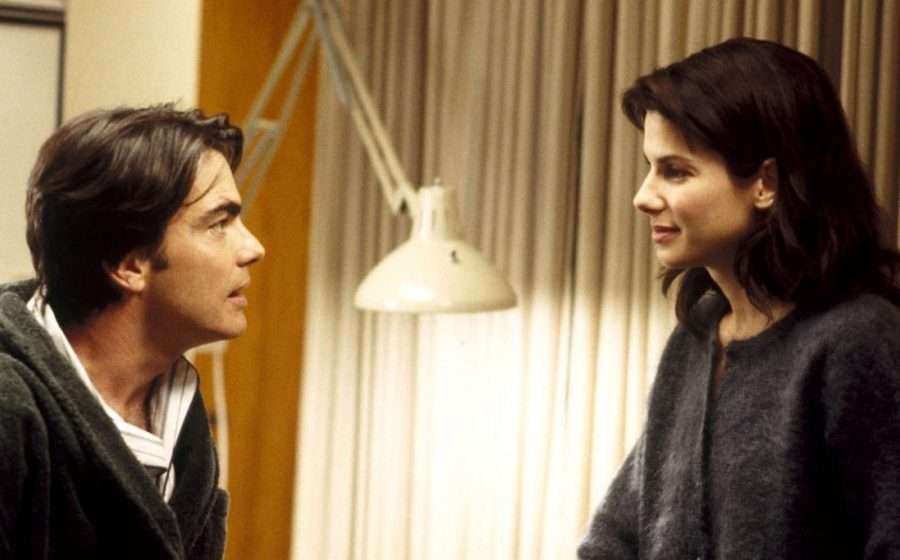 The 1995 Christmas rom-com While You Were Sleeping stars Sandra Bullock as a union transit worker in Chicago. Over 25 years later, it’s still a delightful working-class holiday watch.

Sandra Bullock and Peter Gallagher star in While You Were Sleeping. (Hollywood Pictures)

Romantic comedies and Christmas go together like milk and cookies. Entire production companies exist just to crank out the kind of formulaic, Pinterest-friendly rom-coms that appear on the Hallmark Channel and other basic-cable zero zones every year. But few, if any, ever come close to the sweet perfection of 1995’s While You Were Sleeping.

Released in the spring of that year, only ten months after Speed made Sandra Bullock a huge star and a reliable box office draw, While You Were Sleeping cemented Bullock as America’s sweetheart of the moment and nabbed her a Golden Globe nomination — as well as nearly $200 million in profits for Buena Vista Pictures. The movie immediately became a rom-com classic, celebrated by critics and audiences alike. Over twenty-five years later, it’s still a delightful holiday watch — not so much because of its absurd plot but because of the accumulation of details that elevate it above that silly chain of events.

Briefly, While You Were Sleeping is the story of Lucy Moderatz (Bullock), a quirky, friendly young woman who works as a fare booth attendant for the Chicago Transit Authority (CTA). Unlucky in love, she becomes obsessed with Peter Callaghan (Peter Gallagher, all chin, lips, and eyebrows), a handsome attorney who boards the elevated train at her stop every day, but she lacks the confidence to speak to him.

Lucy works every holiday, because she has no family of her own, and one Christmas Day, she watches Peter get mugged and topple onto the tracks. Bolting out of the booth to rescue him, she saves his life, only for him to fall into a coma. Accompanying him to the hospital, she meets his close-knit and loving family, and through the usual series of comical misunderstandings, they come to believe that she is his fiancée — and she takes to them so quickly that she hasn’t got the heart to correct them.

Hilarity, as you might expect, ensues. Of course, the entire thing is ridiculous on its face: Who would maintain such an obvious lie? Who would believe it? Why would Lucy think this would end in anything but disaster? Why doesn’t the story — a public servant rescues a citizen from certain death on Christmas! — not attract any media attention? Why does her boss (Jason Bernard, a Chicago local and beloved character actor) encourage the charade, knowing it would generate nothing but bad publicity for the CTA if she were found out? Doesn’t it strike anyone as odd that Peter is engaged to the very person who was working at the train station where he took the near-fatal tumble?

More than almost any other genre of film, romantic comedies are driven entirely by vibes.

While You Were Sleeping has more plot holes than an episode of Three’s Company, and everything about it, from its cutesy voice-over narration to the forced complications that occur every ten minutes or so, are incredibly contrived. But who cares? More than almost any other genre of film, romantic comedies are driven entirely by vibes. You don’t watch them because you want an airtight story; you watch them for a meet-cute, a couple that’s meant to be together, and those eye-moistening moments when it seems like true love might not actually triumph.

By those standards, While You Were Sleeping is an unqualified success. Bullock is at the height of her adorability, her every gesture and facial expression daring you not to love her. Bill Pullman, as Peter’s brother Jack, is all smiles and quiet sex appeal as he comes to realize that he (like everyone else), can’t live without Lucy. There’s plenty of good jokes, a gauntlet of emotional highs and lows, and a cast of reliable Hollywood regulars enjoying themselves. And when the big romantic gesture finally arrives at the end — as everyone in the audience knows it will — it’s beautifully executed.

But the movie hasn’t survived and proven one of the most durable rom-coms of the era just because it hews closely to the format. For one thing, Bullock plays a transit worker. The CTA is such an intrinsic part of life in the city, and public transit is so important to any functioning modern metropolis, that it’s nice seeing a city employee portrayed as a main character instead of a cipher in the background. Some people called it miscasting to put superstar Sandra Bullock at the height of her powers in such a proletarian role, but it not only adds a little extra spice to the movie, it also works within the film’s internal logic. While You Were Sleeping shies away from the model followed by 2000s-era rom-coms of careerist strivers going after CEOs and aristocrats. It grounds Lucy as someone whose life and career are dictated by material circumstances — she had to drop out of college and take a well-paid, reliable union job because her parents, solidly middle class, had their wealth evaporated by medical bills — and makes her more relatable than the celebrity chasers and climbers that followed.

Some people called it miscasting to put superstar Sandra Bullock in such a proletarian role, but it not only adds a little extra spice to the movie, it also works within the film’s internal logic.

For another, it’s a classic Chicago film — or, at least, it’s a film that’s set in Chicago. It doesn’t get many of the details of life by Lake Michigan right and gets a lot of them wrong. Most of the cast isn’t from the city and doesn’t even try to emulate the distinctive accent of Chicago; the worst offender is Michael Rispoli (probably best known as Jackie Aprile on The Sopranos), playing the no-account son of Bullock’s landlord, who imports his speech patterns directly from North Jersey. Logan Square, a northside neighborhood, is portrayed as a short walk from downtown, and the Callaghan family home is supposed to be at the western end of Division Street but was actually filmed in the suburb of La Grange. The movie’s opening sequence is a sequence of Chicago stock footage (Wrigley Field, Lake Michigan, the Hancock Tower) so corny they could sell it at Garrett’s.

Most of this is understandable given that While You Were Sleeping was meant to be filmed in New York but switched to Chicago at the last minute for financial reasons. And despite the film flubbing so many of the specifics, Chicagoans — forever insecure about their place in the Great American Cities debate — will enjoy seeing some of the now vanished locations in the movie (such as the Randolph and Wabash CTA stop where Bullock works, which closed in 2017, and the Chicago Sun-Times building, since replaced by the widely despised Trump Tower).

While You Were Sleeping might be more righteous if it played up the benefits of Chicago’s public transit union, but it wouldn’t be a better romantic comedy.

This is a review for Jacobin, so I suppose I’d better mention a few more leftist elements in While You Were Sleeping. It’s not within a thousand miles of being a political movie, but there are threads one can pull: Bullock becomes a CTA worker — a once proud transit agency that today has been devastated by decades of budget cuts — due to America’s ruinous health care system. Lucy eventually chooses Jack — an artisan — over the shallow, self-absorbed Peter, a corporate lawyer. And there are a handful of cultural class signifiers for anyone who cares to look, such as Peter Boyle (as Jack and Peter’s father, Ox Callaghan) insisting that his is a Sun-Times family, not a Tribune family.

But all that is just window dressing. While You Were Sleeping might be more righteous if it played up the benefits of Chicago’s public transit union, but it wouldn’t be a better romantic comedy. That’s because it’s pretty much perfect as it is: an incredibly likable story delivered by an undeniably game cast, skillfully delivered and suffused with humor and charm. It makes you laugh, delivers good feelings with just a slight tinge of melancholy, and leaves you believing in love and joy. And if that’s not what the holidays are for, it’s at least the formula for a great rom-com.