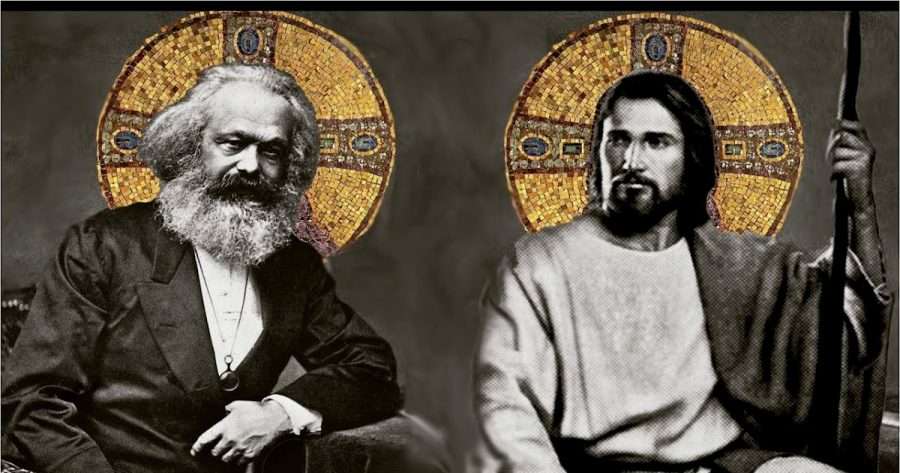 The conventional understanding of Marxism as doggedly anti-religious is wrong. In fact, as the philosopher Alasdair MacIntyre argued, Christianity and Marxism have at times inspired in humanity a radical sense of hope to build a more just world.

“Religious suffering is, at one and the same time, the expression of real suffering and a protest against real suffering. Religion is the sigh of the oppressed creature, the heart of a heartless world, and the soul of soulless conditions. It is the opium of the people. The abolition of religion as the illusory happiness of the people is the demand for their real happiness. To call on them to give up their illusions about their condition is to call on them to give up a condition that requires illusions. The criticism of religion is, therefore, in embryo, the criticism of that vale of tears of which religion is the halo.”

That Karl Marx was an atheist is well known by both his friends and enemies. Even weirdos like me who don’t spend their days panting impatiently for David Harvey’s forthcoming book on the Grundrisse can recite Marx’s famous description of religion as the “opium of the people.” And in practice, many Marxist figures and movements, from Vladimir Lenin to French socialism, had a dim view of faith traditions. Often with great justification, Marxists saw institutions like the Catholic Church as bastions of reaction that had, at best, accommodated themselves to modern conceptions of equality and freedom.

But Marxism’s historical relationship with religion is far more complicated. Latin-American leftists infused the Catholic Church with liberation theology, and Christian theologian Paul Tillich urged humanity to have the courage to work toward socialism. In the United States, leading black leftists, from Martin Luther King Jr to Cornel West, have drawn on the legacy of both socialism and the Bible. And contemporary leftist intellectuals like Terry Eagleton and Reverend Angela Cowser continue in this tradition of dialogue and critique.

Alasdair MacIntyre, the eminent Scottish American philosopher, is a fascinating figure in the Marxism-Christianity nexus. Hugely important on the Anglo-American right, MacIntyre has influenced countless “post-liberal” and socially conservative intellectuals drawn to his gloomy and even apocalyptic critique of liberal modernity (though most lack his sophistication and enduring disdain for capitalism’s injustices). To MacIntyre, modern society has turned right and wrong into matters of personal taste, leaving humanity adrift, nihilistic, and devoid of any sense of what ends are worth pursing in life. Without a teleological sense of what ends are worth pursuing, many ultimately give in to atomistic consumerism or find themselves attracted to destructive forms of the Nietzschean “will to power.”

But long before he was providing intellectual ammunition for conservative religious magazine First Things’s crusade against the existential dangers of homosexuality, MacIntyre was an original and interesting Marxist thinker. Marxism and Christianity, written when MacIntyre was only twenty-three years old, is that rare thing: a first-rate book that deserves to be a minor classic but that has been so overshadowed by the author’s later political evolutions it remains woefully underread.

MacIntyre’s controversial thesis is that Marxism, far from being hostile to Christianity, in fact “humanized certain central Christian beliefs in such a way as to present a secularized Christian judgment upon, rather than the Christian adaptation to, the secular present.” In this respect, MacIntyre takes seriously his great opponent Friedrich Nietzsche’s similar claim that socialism has its moral roots in Christian egalitarianism and humanism. But MacIntyre goes further in locating secularized Christian ideas directly in Marx’s work.

Marx began his career as a Hegelian — a devotee of the great German philosopher Georg Wilhelm Friedrich Hegel — and, as MacIntyre stresses, Marx’s inspiration was profoundly interested in Christianity. Hegel saw the Bible as expressing in symbolic form many of his philosophy’s major themes. For instance, understanding humanity eating the fruit of the tree of knowledge as a purely sinful act misses the point. Instead of condemning Adam and Eve with fire and brimstone, God pensively notes that man had become like him in knowing good and evil and consequently could no longer reside in blissful ignorance within Eden. Humanity now had to play an active role in the world’s drama.

MacIntyre’s controversial thesis is that Marxism, far from being hostile to Christianity, in fact ‘humanized certain central Christian beliefs.’

This brought with it the possibility of our freedom and flourishing but also the risk of our alienation and estrangement from nature and necessity. Religious figures like Jesus, the God-man who reconciled freedom and necessity in his person, symbolically expressed the possibility of resolving this alienation. But religious symbols and figures could very quickly and thoughtlessly become idols that were worshipped for their own sake rather than as emblematic expressions of the deeper truth.

MacIntyre explains that Marx picked up many of Hegel’s ideas but turned them in a more materialist, more radical direction. In the Philosophy of Right, Hegel had described the monarchical Prussian state as the highest social form yet achieved, and various “right Hegelians” defended Christianity’s role in reconciling the masses to the status quo. For Marx, this conservative reading excused the naked injustice of autocratic Prussia: the mass use of counterrevolutionary violence, the ubiquitous censorship, the widespread exploitation and impoverishment of the working classes.

But Marx was never so crude as to simply condemn religion. Religion gave human beings a sense of purpose amid material deprivation and political disenfranchisement, and it would persist until people’s basic needs were finally met. The alternative was to accept that much of humanity would live and die by sweat and toil and know no reward or even appreciation for it.

As Macintyre puts it:

The religious vision and its transmutations in German philosophy spring out of society: in order that they shall be fulfilled and realized in the accomplishment of the good society that they envisage, they themselves will have to make way for a more radical philosophy, a philosophy of social practice. But society is divided: this is indeed a sign of the ills that beset it. Who then is to change it? The clue to Marx’s later answer is already given in his description of the workingmen whom he met in Paris in 1844: “Among those people the brotherhood of men is no phrase, but truth and nobility shine from their labor hardened forms.”

Plenty of religious institutions and personalities seem content to carry water for the rich and powerful rather than the meek and poor who are supposed to inherit the earth. Even conversative Christians who are critics of the status quo, like First Things editor R. R. Reno, have little to say about the economic exploitation and environmental degradation that plague our world. Reno, however, does believe that there is a “class war, a war on the weak . . . epitomized by the campaign for gay marriage,” which must be fought tooth and nail. Because the biggest problem facing the “poor” isn’t being poor but the prospect of two men getting married.

By positing a transcendent ideal of justice and goodness, religion played at ‘least partly a progressive role in that it [gave] the common people some idea of what a better order would be.’

But MacIntyre also stresses that religion never simply played a reactionary or reconciliatory role. By positing a transcendent ideal of justice and goodness to which the material world was continuously compared, religion played at “least partly a progressive role in that it [gave] the common people some idea of what a better order would be.”

He chastises conservative apologists, who are quick to wheel out St. Augustine quotes to impress upon the exploited the inevitable imperfections of the world. These conservatives spend an inordinate time trying to “free Christianity from its inheritance from Gnosticism” and a commitment to justice in the here and now “but worry far less about what Christianity inherited from Pontius Pilate and Caiaphas.” They fail to remember that Christianity’s founder commanded the rich to give up all they had to the poor; spent his days hanging out with sinners, prostitutes, and thieves; and commanded that, as God’s will was done in heaven, so too should it be on earth. He relentlessly attacked the idolatrous forms that religion assumed, especially when attached to a defense of power.

In all these respects, MacIntyre argues that Marxism was animated by a critical Christian spirit, bringing a “hope” for the future in secularized form. Such radical hope is precisely what is denied by “capitalist realism,” which insists that the present economic and political order must carry on forever. But it can also be rekindled whenever, in the words of the Gospel of Matthew, “the wretched of the earth learn that God is on their side.”