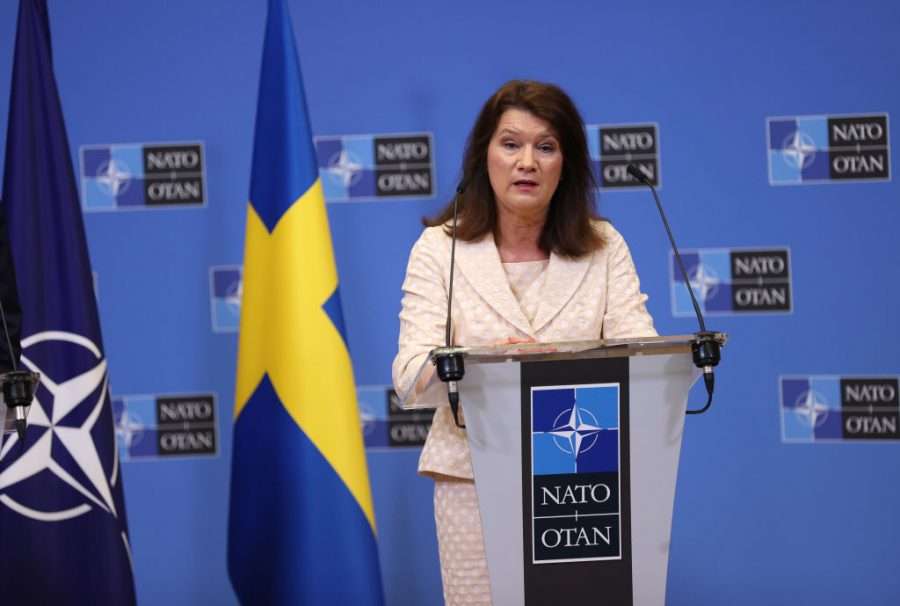 Sweden’s left has historically been opposed to joining NATO. But as the war in Ukraine made joining the alliance popular, Sweden’s Social Democrats changed tack, alienating many of their supporters and exposing deep divisions among the Left in the process.

Sweden’s former minister of foreign affairs Ann Linde speaking at a joint press conference after the signature of the accession protocols to NATO of Finland and Sweden in Brussels, Belgium, July 5, 2022. (Dursun Aydemir / Anadolu Agency via Getty Images)

On November 8, Ulf Kristersson, the newly elected prime minister of Sweden, went to Turkey. He was courting President Recep Tayyip Erdoğan as a part of Sweden’s bid to join NATO. For many Swedes, the image that has come to symbolize the historic visit is a zoomed in frame of Kristersson’s hand, small and contorted, being squeezed to a bright red hue in Erdoğan’s grip.

After Sweden officially asked to join the military alliance in May, many NATO nations quickly signaled their enthusiasm at the prospect of Swedish membership. But Turkey was, to say the least, less keen. Sweden-Turkey relations have been sour for decades as a result of Sweden’s longtime support of the Kurds and the Kurdish fight for independence. Each NATO member state has the right to veto new members, and Erdoğan made clear his intention to use this right against Sweden, a nation he sees as supporting terrorist movements in Turkey.

It was only several weeks later that Erdoğan signaled he would be willing to lift Turkey’s veto in return for significant concessions. In a tripartite agreement signed in late June by Turkey, Sweden, and Finland (the two Nordic nations asked to join NATO at the same time), Sweden and Finland agreed to cease all support to People’s Protection Units (YPG), the mainly Kurdish militia in Syria, as well as Kurdistan Workers’ Party (PKK), the militia fighting for Kurdish autonomy in southeastern Turkey and northern Iraq.

They also agreed to expedite Turkey’s many extradition requests, mainly of Kurds accused of terrorism or association with the PKK. Finally, Sweden and Finland agreed to reopen arms exports to Turkey “in line with Alliance solidarity.” This will end a period of an effective arms embargo against Turkey introduced by Sweden and Finland in 2019, when both countries began refusing to issue new weapons export licenses to Turkey as a result of its military offensive against Kurdish positions in Syria.

The message to Kurds, both in Sweden and elsewhere, is clear. The era of Swedish solidarity with the Kurds is over. For the many Swedish Kurds who are members of the Social Democrats or engaged in the broader Swedish left, the sense of betrayal is particularly acute. A mere two years earlier, Sweden’s Social Democratic foreign minister, Ann Linde, tweeted her support for the Kurds and urged Turkey to withdraw its troops from northern Syria. And just one year ago, the Social Democratic government was able to cling on to power only as a result of a deal with the independent parliamentarian Amineh Kakabaveh, a former Kurdish peshmerga fighter.

In a series of events which could scarcely have been fabricated, Kakabaveh, having been expelled from the Left Party, found herself in the powerful position of being able to make or break parliamentary majorities. The Social Democrats needed Kakabaveh’s vote, and in return, she wanted promises of continued support for Kurdish independence. A deal between Kakabaveh and the Social Democrats was signed in November 2021. (Erdoğan would later accuse Sweden of harboring Kurdish terrorists “even in parliament.”) Come 2022, everything changed. In August, Linde compared waving a PKK flag to waving an IS flag, whilst reassuring Turkey that the deal with Kakabaveh had already lapsed in June, at the end of the Swedish parliamentary session.

Sweden is paying a high moral price for its NATO membership. In return, it expects binding security guarantees from the alliance, the kind that Sweden hasn’t previously been able to get (or give) as a nonaligned state. The standard argument holds that Sweden needs these in light of the worsened security situation in Europe. When it became clear in early spring that Finland, one of Sweden’s most important military and strategic partners, wanted to join NATO, it seemed to many as if Sweden had no other option than to join as well. (Finland shares a 1,340 km border with Russia and the memory of the Soviet invasion of 1939 remains an important part of the nation’s culture).

Sweden has gradually increased its cooperation with NATO since the 1990s, participating in joint exercises and missions (including Kosovo, Afghanistan, and Libya). Sweden is already implicitly relying on NATO for its security in case of an attack — and quite explicitly relying on other EU member-states, most of whom are already members of NATO. Sweden is already committed to supporting most other NATO nations in case they are attacked (with some notable exceptions, including the United States, Canada, and Turkey) as a result of the EU’s Lisbon Treaty, as well as its own unilateral commitments. Saying no to joining NATO in these circumstances, the argument goes, would make little sense. Sweden already incurs many of the costs and risks associated with NATO membership (it is already clear to Russia whose side Sweden is on), whilst receiving no official security guarantees in return.

The Social Democratic leadership feared losing voters to the Right if they didn’t join NATO. They knew that the electoral risk of joining was small, compared with the risks of not joining.

But the argument should not be overstated. As a result of crippling economic sanctions and heavy military defeats, Russia’s capacity to wage conventional war has been severely degraded. And although the Ukraine invasion came as a shock to many, Russia’s willingness to invade countries in its vicinity had been clear ever since it invaded Georgia in 2008 and Crimea and eastern Ukraine in 2014. The full-scale attack of Ukraine launched in February this year came as a surprise to many only because it showed that Vladimir Putin was willing to take bigger risks than previously thought.

A stronger argument — one which holds considerable sway even amongst Swedish anti-NATO leftists who do not believe the threat against Sweden has increased as a result of Russia’s invasion of Ukraine — is that joining the alliance is an act of solidarity with Finland and other Baltic states. Indeed, many have argued that Sweden faces a moral cost of not joining, precisely for this reason. But the cost of solidarity with Finland and the Baltic states comes at the expense of Sweden’s solidarity with the Kurds.

On the Swedish left, the debate over NATO accession happened so quickly that the dust had scarcely been kicked up before it settled again. The key player in the process was the Social Democratic Party, the largest party on the Swedish left. Throughout the party’s history, it has been a staunch defender of Sweden’s long-standing policy of military nonalignment. (Swedish neutrality, as opposed to nonalignment, was abandoned a long time ago, formally when Sweden joined the EU in 1995).

Abandoning a long-held policy of military nonalignment over the course of a couple of weeks, without giving party members a real opportunity to discuss the matter, let alone vote on it, seemed rash to many in the party. But this is exactly what one could have expected from the Social Democrats. One of the most successful political parties in postwar Europe, the Swedish Social Democrats run on a highly centralized, top-down model. Sensing a shift in public opinion (the March opinion polls showed that a majority of Swedes were, for the first time, in favor of joining NATO), and faced with an upcoming election, the Social Democrats acted swiftly.

The party leadership feared losing voters to the Right if they didn’t join NATO. They knew that the electoral risk of joining was small, compared with the risks of not joining. Any harsh critics would simply vote for the Left or the Green Party instead — smaller parties whose votes the Social Democrats rely on for building coalitions. One of the risks of being such a successful party, it seems, is a tendency to stare oneself blind at short-term electoral strategy. The Social Democratic gamble wasn’t enough to win the election, however. Although taking a pro-NATO stance was one of the reasons that support for the Social Democrats increased slightly in the run-up to the election, the left-wing bloc was unable to form a governing coalition. Sweden is now run by a right-wing coalition of four parties, the biggest of which is the neo-Nazi Swedish Democrats.

The Left Party and the Greens remain anti-NATO, but their critique of the military alliance has been neither particularly loud nor engaging. Both parties are to some extent stymied by the fact that the Social Democrats are, and have always been, their only vehicle to power. Several top members of the Greens publicly came out in support of NATO, and the Left Party wasn’t particularly vocal in their critique in the run-up to the election, appearing to drop or simply forget their previous demand of a referendum on NATO. The Left also put themselves in a difficult position by voting against sending military aid to Ukraine in late February. This decision was met with a huge public outcry, including from sections of the anti-NATO left. In response, the party leadership changed their policy within hours of the vote.

By that point, the damage had already been done. People got the impression that the Left’s solidarity with Ukraine consisted of nothing but empty words. A position of support for Ukraine, which remained in staunch opposition to NATO, became increasingly difficult to articulate in the months that followed. Besides, many left-wing activists and politicians were too absorbed fighting against neo-Nazis at home to worry about Sweden playing a part in American imperialism or Turkish nationalism abroad.

The Swedish bid to join NATO opened up a deep rift in the Swedish left.

The Swedish bid to join NATO opened up a deep rift in the Swedish left. And yet, somehow, the rift seems to have already been pushed beneath the surface. Both the Left and the Greens no doubt felt a sense of defeat early on. The fight against NATO was over as soon as the Social Democrats flipped. With the tripartite agreement with Turkey in place and a new right-wing government installed (with even fewer qualms about extraditing Kurds to Turkey than the Social Democrats), few hurdles now remain on Sweden’s path to NATO membership.

For the Swedish left — whether pro- or anti-NATO — this means that the focus must now change. What the Swedish left has always found most objectionable about NATO is that it isn’t what it claims to be: a collective defense alliance. Too many NATO operations have fallen so far outside of this mission statement that the tagline appears as nothing but a failed attempt at gaslighting the rest of the world. NATO operations in Afghanistan and Libya are only the two most egregious examples.

Both Sweden and Finland are, in general, strongly opposed to using NATO military force in out-of-area operations for reasons not clearly tied to collective self-defense (although both countries, it should be noted, participated in Afghanistan, and Sweden in Libya). Given Sweden and Finland will, with a high degree of certainty, both soon become members of NATO, the Left in both countries should make it a priority to work toward ensuring that NATO becomes what it already claims to be.