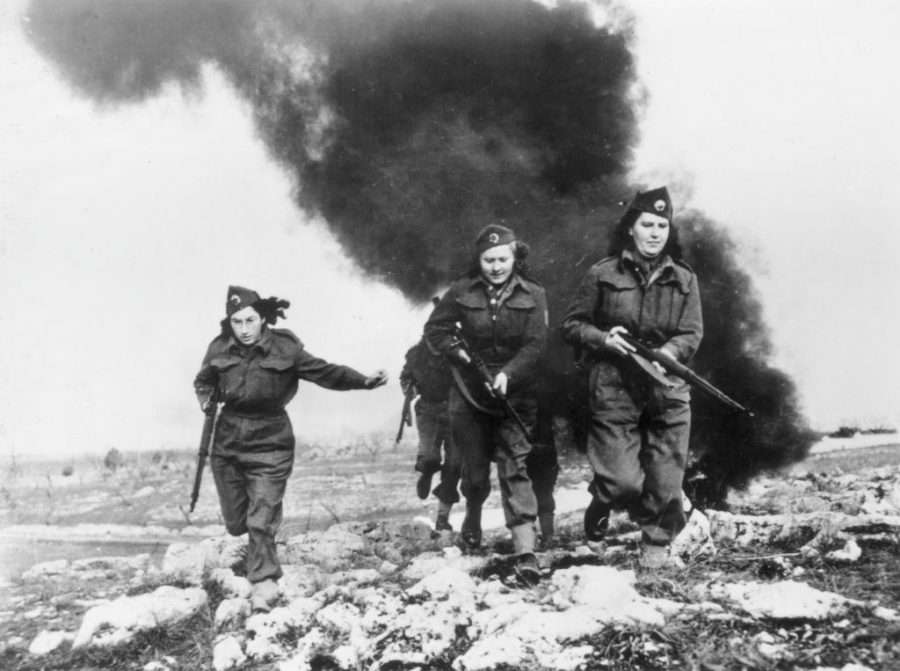 Eighty years ago, the Women’s Antifascist Front of Yugoslavia was founded to help resist the Axis powers and their local collaborators. Working-class women played a decisive role in fighting fascism — and claimed their place in building a new socialist society.

Women who fought in WWII against the Nazis in Yugoslavia training at the Allied base in Italy, 1944. (Keystone / Getty Images)

Rajka Baković and Zdenka Baković were Croatian revolutionaries and members of the anti-fascist resistance movement. They were killed in Zagreb in the Nazi-puppet Independent State of Croatia (NDH) in 1941. Rajka was twenty-one years old, and Zdenka was twenty-four.

From the start of World War II, these Baković sisters had used their family newsstand in Zagreb as a key hub for connecting resistance members. They would leave packages or letters in order to arrange meetings, and the stand doubled as a supply point for the League of Communists of Croatia. Since Zdenka spoke German fluently and regularly ordered press in that language, it also quickly became a gathering place for German officers. It provided an ideal camouflage and a way to spy on the occupation forces. But the Baković sisters’ work did not go unnoticed. After one courier from the local committee of the League of Communists in Dalmatia was caught and tortured, he revealed where he had been taking the letters.

During the night of December 20, 1941, the Ustaša Surveillance Service (UNS) arrested Rajka and Zdenka and tortured them for five days. Despite the severe beatings they suffered, the sisters did not betray anyone. On December 24, 1941, Rajka was transported to a hospital. On December 25, Zdenka, in a moment of desperation after seeing that Rajka was not there, broke free from her guards and threw herself from the fourth floor of the UNS headquarters, where she died. Rajka died from her severe injuries on December 29, 1941. In postwar years, she was honored as a people’s hero of Yugoslavia.

Only a year after the Baković sisters were killed, the Women’s Antifascist Front of Yugoslavia (AFŽJ) was officially founded. While the organization was new, its emergence followed the continuous work of the various already existing women’s resistance movements in Yugoslavia. On December 6, 1942, the first conference of the AFŽJ took place in Bosanski Petrovac (Bosnia and Herzegovina), ensuing the establishment of federal councils in the Yugoslav socialist republics. While delegates from Macedonia and Slovenia were unable to make it through the enemy lines on time, the conference was attended by 166 delegates from across Yugoslavia, seeking to devote all available resources to the ongoing People’s Liberation Struggle. AFŽJ soon became one of the biggest mass revolutionary movements of women in the Yugoslav region and beyond. As an illustration, by the end of 1942, the Croatian AFŽJ alone had already gathered around two hundred fifty thousand women.

By fighting fascism in the name of a socialist future, the AFŽJ was simultaneously challenging conservative ideas about women and their role in society. It continuously worked to lay the foundations for the development of feminist emancipatory policies — and on tying them to the broader organization of society. In the 1980s, Yugoslavia would position itself internationally as one of the pioneering states deciding the shape and pace of important United Nations discussions that came under the umbrella term “the woman question.”

After the dissolution of the Kingdom of Yugoslavia on April 6, 1941, and the subsequent Twelve-Day War, most of modern-day Croatia, Bosnia, and Herzegovina were turned into the Nazi-puppet Independent State of Croatia. Slovenia was occupied by the Germans, Dalmatia, and Montenegro by the Italians, while Serbia and Macedonia fell under the control of Hungarians, Germans, and Bulgarians. It was at this time that the Communist Party of Yugoslavia called on all progressive forces and nations to start an armed uprising.

The women of Yugoslavia joined this struggle without delay, forming a broad and united front of workers, peasants, and other civilians. These women participated in the resistance movement, gathered arms, provided medical support, organized the publication and distribution of anti-fascist leaflets and texts, assisted the arrested fighters in their flight, mustered new recruits for the partisan forces, and organized diversions.

We began from the heroic example of the Baković sisters. But there were also countless others: Kata Dumbović, killed in action while trying to release her comrades from the Ustaša concentration camp in Kerestinec; the female squad that sabotaged the main post office in Zagreb; women who protested against the confiscation of food in Split; female helpers who did charitable work in the Karlovac hospital; and other resistance members like Anka Butorac, Nada Dimić, Ljubica Gerovac, Dragica Končar, and many others.

It should be emphasized that many women were actively engaged in combat during the People’s Liberation Struggle (Narodnooslobodilačka borba). They joined the units of the People’s Liberation Army as soldiers, officers, bombers, political commissaries, and medics. Nada Cazi reports that there were more than a hundred thousand female fighters in the People’s Liberation Struggle. One in four died in combat and around forty thousand were wounded. More than three hundred thousand were awarded orders of merit for protecting their peoples. In total, around six hundred twenty thousand women fell victim to the fascist terror regime, making up more than third of all human losses Yugoslavia suffered during World War II.

However, while doing all that during the People’s Liberation Struggle, women were also responsible for the bulk of social reproductive work, including garnering war provisions, offering medical assistance to the wounded and the children, organizing measures against the typhus pandemic, as well as procuring medication, clothing, and sanitary supplies. Under the slogan “Not a grain of cereal for the occupier, not an inch of land untended,” women created workers’ brigades that helped during the harvest.

One of the most notable examples was the women’s work action in the Požega basin that in a single night reaped enough grain to fill three hundred train wagons. Another was the action in the Raša river valley, in which partisan women gathered overnight, equipped only with scissors, and managed to reap and steal seven hundred quintals of grain from under the enemy’s nose.

So, let’s state the obvious — women’s social reproductive work was the backbone of the People’s Liberation Struggle. Without this type of work, the victory over fascism would not have been possible. The historical fact that women were not only active in combat alongside their male comrades, but at the same time organized the whole social reproduction of everyday life, has been ignored. But this is wholly unjustified. Women shed their blood in the fight against fascism, both on the front lines and behind the scenes.

Fascism is not an issue of the past. It is a permanent threat, still attempting to reach the light of day. Its core has not changed, but it exploits the nature of today’s economic and social crises to find new forms to express itself. In this way, the modern alt-right and radical-right movements have gained the confidence to free fascism from the shackles of the past, to recruit contemporary allies and impose their hateful rage on the political agenda. Faced with this threat, fascism should be carefully studied and tracked down in all its forms and expressions, so that we can remain one step ahead of it and promptly nip it in the bud.

As the German Marxist Clara Zetkin emphasized, fascism is the ultimate product of capitalism and is fostered by severe social and political crises: “Fascism is rooted, indeed, in the dissolution of the capitalist economy and the bourgeois state.” Just in the past fifteen years, capitalism has undergone several brutal upheavals: the 2007–8 financial crisis, the COVID-19 pandemic, the current soaring inflation, as well as ongoing climate and refugee crises. To make matters worse, there is the recent political instability in Eastern Europe, together with the tensions of imperialist blocs that strengthen the gap between the global center and its periphery.

The periods following socioeconomic crises represent dangerous breeding grounds for the rise of fascist movements. Such movements identify these crises, but instead of placing the responsibility for them on the capitalist system, they look for scapegoats. The usual suspects are leftists, feminists, LGBTQ people, refugees, people of color, Muslims, Jews, Roma people, or anyone deemed nationally “suspect.”

Faced with deepening social hardships — and the awakening of both old and new reactionary, right-wing, and fascist tendencies — we have to pose the question: Who is going to fight them? The answer must be clear and unapologetic. The responsibility for resistance will have to fall on all those united by their interest in protecting the oppressed and the exploited, today as yesterday.

In 1958, fifteen years after the first conference of the Women’s Antifascist Front in Bosanski Petrovac, the Alliance of Women’s Organizations of Croatia held a plenum. The chairwoman of the board, Marija Šoljan, held a speech on the occasion, in which she loudly proclaimed: “Comrades, we continue to work.” We could add: “…as fast as possible, because our time is running out.”