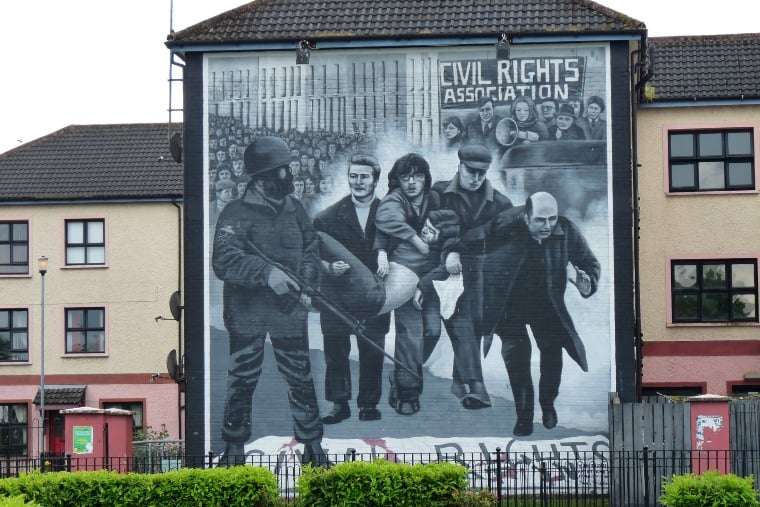 A mural of the Bloody Sunday massacre (Picture: murielle29 on Flickr)

The secretary of state for Northern Ireland Sir Patrick Mayhew told the Irish deputy prime minister Dick Spring that the British government would not apologise over Bloody Sunday, as it would be accepting liability, which “could not be justified”.

According to a recently released confidential document, the comments were made at a meeting between Mayhew—with Tory minister Michael Ancram—and Spring in London on 6 February 1997.

Mayhew also told Irish officials that there was “not much prospect” of the Widgery inquiry findings—which were a whitewash—being overturned. Mayhew opened up a discussion about Bloody Sunday, describing it as “an absolute disaster”. An Irish official noted that he made the remark “much to the discomfort of Ancram” who suggested that “tragedy” might be a better description.

The note stated that Mayhew stood his ground, insisting that his own assessment was the most appropriate. He suggested that the British Government might not have a problem expressing “profound regret” for what had occurred, but to apologise would be to “accept liability” and this could not be justified on the “available evidence”.

Members of the Parachute Regiment shot dead 13 civil rights protesters on the streets of Derry in January 1972. Another man shot by paratroopers died four months later. An inquiry led by Lord Chief Justice Lord Widgery supported the soldiers’ version of events. It endorsed the lie that they had come under fire and were reacting to an attack.

That attitude was continued by the Labour Party when it took office. Any review of the events of Bloody Sunday should have an “overriding limitation” that no soldier should be placed in danger of legal action, Northern Ireland secretary Mo Mowlam told a cabinet colleague in 1997.

Declassified files reveal that a civil servant prepared a briefing paper for Mowlam on options for dealing with Bloody Sunday in May of that year. It said, “There is no doubt that 25 years ago the events of January 30 1972 in Derry became a potent emblem of nationalist grievance. Time has not changed this.

“Expectations have been further increased by Labour’s victory, and there would be a political price to pay if nothing were done or said now. An apology (or something close to it) would have a tremendous impact, and if anything is to be done there is unlikely to be a more opportune moment.” The briefing paper included potential wording for a draft apology.

The following month Mowlam wrote to the then defence secretary George Robertson stating her preference for announcing a new review into Bloody Sunday. But, she continued, “The overriding limitation would be that no soldier or other Crown servant should be placed in jeopardy of legal action by whatever the reviewer might find or by what might flow from his findings.”

After years of campaigning by victims’ families, then-prime minister Tony Blair ordered a new inquiry in 1998. The Saville Inquiry concluded in 2010 that none of the casualties was posing a threat or doing anything that would justify their shooting and then-prime minister David Cameron apologised in the House of Commons, saying that the killings were “unjustified and unjustifiable”.

A committal hearing is set to take place in January to determine if there is sufficient evidence against a soldier accused of two Bloody Sunday murders for a case to proceed to Crown Court trial.