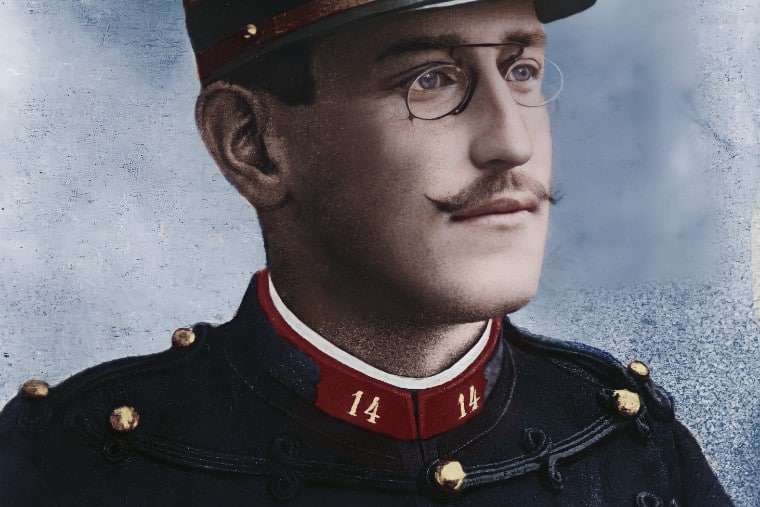 Ruling classes in trouble look for scapegoats. And the conviction of army officer Captain Alfred Dreyfus for espionage in 1894 was perfect for the crisis-ridden elite at the top of French society. Dreyfus was a Jew and vilified as a representative of “outsiders” ­undermining everything noble about France.

A few years earlier a ­massive corruption case linked to the building of the Panama Canal discredited swathes of the French ruling class.  Two of the many ­figures involved in handing out bribes were Jews. This added to antisemitic filth pumped out by large sections of the press and politicians. Dreyfus’s apparent crimes added to that poison.

Found guilty at a secret court-martial of selling military secrets to Germany, the court sentenced Dreyfus to life imprisonment.  Because he would not admit his guilt, Dreyfus was sent to the penal colony on Devil’s Island in South America. The authorities cleared a barren rock two miles long and 500 yards wide of all life except guards to contain Dreyfus alone. He lived in a stone hut under perpetual surveillance.

No wonder, it was said, Germany had defeated France in a recent war when such ­traitorous elements were at the heart of the state.  The affair could be used to unite people against an external enemy and further ­undermine the memory of the ­workers’ revolt of the 1871 Paris Commune. Almost nobody doubted the conviction.

But all the evidence against Dreyfus was a forgery, and gradually his family and then a wider circle of supporters began to undermine the official account. Sections of the left and some liberals took up Dreyfus’s case.  All the rotten elements in society lined up to say Dreyfus was guilty and to smear his supporters as unpatriotic scum.

The right falsely claimed that behind the calls for Dreyfus to be freed was an underground “syndicate” made up of Jews, socialists and foreigners. This syndicate was ­supposedly corrupting judges and bribing witnesses. It aimed to break the nation’s faith in the army, reveal its secrets, and when defenceless open its gates to the German enemy.

Historian Barbara Tuchman wrote it was “personified by ­cartoonists as a fat Jewish‑featured figure in rings and watch chains wearing an expression of triumphant malevolence”. The issue dominated ­political life for two years, from the summer of 1897 to the summer of 1899. Leon Blum, later to be a socialist prime minister, wrote it was a “veritable civil war” and “a human crisis no less violent than the French revolution”.

On 13 January 1898, ­novelist Emile Zola, one of the world’s most translated writers, ­published an article of 4,000 words headlined “J’Accuse” (I accuse) in the liberal ­newspaper L’Aurore. It sold 300,000 copies, although some were to the army’s supporters for ­burning in the streets.  It took the bold approach of attacking so many influential people by name that they would be forced to sue him for libel, thereby forcing a public review of the case.

He wrote, “I accuse general Billot of having had in his hands the certain proofs of Dreyfus’s innocence and of having concealed them for political motives and to save the face of the general staff.  “I accuse general Boisdeffre and general Gonse of having made themselves accomplices in the same crime, the first no doubt because of his religious prejudices, the other perhaps out of that esprit de corps which aims to make the war office into a sanctuary that must not be attacked.”

Zola pointed out who was really guilty of the spying offences and denounced “the ‘dirty Jew’ obsession that is the scourge of our time.”  It made the case an ­international affair and brought the writs that Zola had hoped to provoke. The backlash was so fierce that Zola was speedily convicted of criminal libel and had to flee to England to escape jail. But more and more people could see the army had ­fitted-up Dreyfus.

A big social ­movement, the League for the Rights of Man, held ­public ­meetings across the country.  It organised a mass petition for Dreyfus’s release that faced everyone with the decision of whether to sign or not. Whole villages supported it while others unanimously refused.

The pressure of a ­growing campaign in the streets forced a second court martial in late 1899, which saw Dreyfus released from his island prison.  Sensationally the second trial repeated the old verdict because the thought of admitting he was innocent was too destabilising for the military.

But to halt the agitation, the president made a deal to pardon Dreyfus. It took many more years for Dreyfus’s name to be completely cleared. The case divided socialists, not because of any support for antisemitism but because of the class forces involved.

Jules Guesde was associated with the slogan “Building ­socialism and nothing but socialism”. He said that the affair was just a falling out among the ruling elements which was ­irrelevant for socialists.  After all, he said, whatever their differences, all the central figures were part of an army that had crushed the Commune.  Leading trade unionists and some anarcho-syndicalists saw the whole thing as a bourgeois mystification and distraction.

But another prominent ­socialist, Jean Jaures, argued that workers must take up all questions of democracy. And he added, “Who is most threatened today by the arbitrary actions of generals, by the glorified violence of ­military repressions? Who? The proletariat.

“They thus have an interest of the first order in punishing and discouraging the illegalities and violence of courts-martial before they become a kind of habit accepted by all.” He said divisions at the top could be used to weaken the ruling class.

Jaures was supported by the Polish-German ­revolutionary Rosa Luxemburg. In one of her early works, she argued this point. In some ways it prefigured what the Russian revolutionary Vladimir Lenin would put ­forward a few years later. She wrote, “The principle of class struggle imposes the active intervention of the ­proletariat in all the political and social ­conflicts of any importance that take place inside the bourgeoisie.”

Luxemburg said the affair involved “militarism, ­chauvinism-nationalism, ­antisemitism, and clericalism”. Luxemburg thundered that it would be “totally incomprehensible to not enter into a struggle with these enemies”. And she added later, “The enemy of the working class, militarism, stood completely exposed and it was necessary to direct all spears against it.”

But she also argued that socialists should approach agitation around Dreyfus as “a clearly characterised class struggle which differentiates it from other factions of the movement”. Jaures and Luxemburg were right to say revolutionaries have to be tribunes of the oppressed rather than just trade ­unionists. Oppression wrecks lives but is also a knife at the throat of working class unity.

But this wasn’t the end of the socialist debate about the Dreyfus case. Less than a year after J’accuse was published, the ­conservative prime minister offered a cabinet minister post to one of Jaures’s ­socialist ­supporters—Alexandre Millerand.

He had decided this was the best way to end the affair and broaden support for his new government. Millerand was supposed to be “balance” for the appointment of general Gallifet, the executioner of the Commune, as minister of war.  It was the first example of a socialist joining an openly capitalist government, which, again, sharply divided the left. Jaures defended the move as a logical follow-up to the Dreyfus affair and as a transitional stage of joint capitalist-worker rule.

It was an early sign of ­arguments that would sweep through the social democratic, ­Labour-type, parties about revolution or reform.  They nearly all adapted to the bourgeois state and, in 1914, at the outbreak of world war, rallied to their own ruling class to back the slaughter of workers from other countries.

Luxemburg’s warnings about Millerand were entirely ­correct. The government he joined refused to prosecute those who had put Dreyfus away—and Millerand gave them radical camouflage. He dropped the demand for justice as the price of staying in the cabinet.