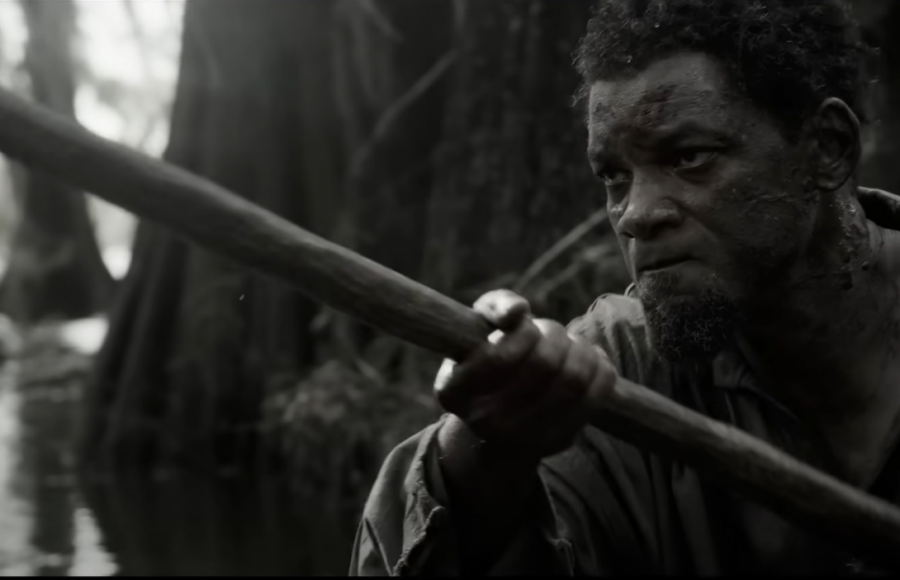 There aren’t enough films depicting runaway slaves fighting off Southern racists on the way to freedom. So when that premise is wasted on a terrible movie, as it is in Will Smith’s Emancipation, it’s a great tragedy.

Will Smith in Emancipation. (Apple Studios, 2022)

It’s too bad about Emancipation. Currently running on Apple TV+, it’s based on the story behind the infamous 1863 photograph “The Scourged Back,” displaying the horrifying skein of raised welts covering the back of a slave who became known as “Whipped Peter.” (He may have actually been named Gordon, but this movie has another slave named Gordon, played by Gilbert Owuor, who makes a desperate run for freedom at the same time as Peter.)

The shocking photograph was circulated by Union abolitionists to counter Confederate claims that slaves were treated well in the South, and it could have been the foundation of an illuminating movie. But writer Bill Collage (Assassin’s Creed, The Transporter Refueled) and director Anton Fuqua (The Equalizer franchise, Training Day) opted to turn the film into a bizarre combination of action movie, historical drama, and star vehicle for Will Smith.

The film follows the essentially true story of Peter’s harrowing ten-day escape from brutal treatment on a Louisiana plantation, through the swamps to a Union encampment stationed in Baton Rouge, where he was taken in as “contraband” of war and, once he recovered from his journey, enlisted to serve in a black regiment. The medical personnel who examined him took down his report.

But at every turn in Fuqua’s movie, the already amazing story is pumped full of gratuitous tall-tale, action-hero nonsense. It reaches its nadir when Peter, already weakened by a bullet wound and hiding in the swamp to escape the relentless slave hunters on his trail, is attacked by a massive alligator, fights it in a protracted roiling battle underwater, and wins.

You can hardly roll your eyes hard enough to express how absurd this scene is. But save your eye-rolling ability for the bee and snake attacks, because all of nature is out to get Peter during his escape, always at the most inconvenient times, when slave hunters are bearing down on him.

The film did badly in its limited theatrical release. Its failure to appeal to critics or audiences has been attributed to antipathy toward Smith, because of the scandal resulting from his attack on host Chris Rock with “the slap heard around the world” at last year’s Academy Awards ceremony. “Will knows it’s a long road to redemption and a lot of folks won’t forgive him. This really rams it home,” one anonymous source told a gossip mag. The publicity campaign for Emancipation was called Will Smith’s “apology tour” in the Wall Street Journal.

But there’s a simpler explanation for the film’s unpopularity: it’s pretty bad.

It’s loaded down with derivative, overly familiar material, and you may be strongly reminded at various points of the narratives of Roots, Glory, 12 Years a Slave, Django Unchained, and Birth of a Nation (the 2016 Nate Parker film about the Nat Turner rebellion). That Emancipation is somewhat distinguished by being filmed in black-and-white was Fuqua’s choice, in order to “drain the color out of the Confederacy,” though there are desaturated “tinted” color accents added with blood, fire, the American flag, and other elements.

An otherwise black-and-white still from Emancipation, with a color-tinted American flag. (Apple Studios, 2022)

The pattern of what gets tinted and when gives you something to wonder about in the more dully conventional parts of the film, because it’s not clear what Fuqua is achieving in the look of the film, though black-and-white is generally beautiful and has such dramatic possibilities. I’d assumed at first that he was trying to imitate the effects of early silent cinema, when black-and-white films often included color-tinted elements or sequences. Though I still had no idea why.

Celebrated cinematographer Robert Richardson (Quentin Tarantino’s favored director of photography for Inglourious Basterds, Django Unchained, The Hateful Eight, and Once Upon a Time in Hollywood) said they were trying to avoid a “Hallmark representation” of slavery by avoiding color. But color film has no general tendency toward a “Hallmark” look, and certainly narratives about slavery don’t resemble Hallmark content in any way, so I’m still baffled.

The performances are as good as they can be, given the strange yet unmemorable script. Charmaine Bingwa is moving as Dodienne, Peter’s wife, struggling to keep her family together and strong in their language, religious beliefs, and Haitian identities while Peter is on the run. Ben Foster plays his now-patented character, the cold-eyed psycho, this time as Jim Fassel, the obsessive leader of the slave hunters pursuing Peter. He’s only one of the many white male characters represented as snarling racist sickos every moment they’re onscreen, never doing anything ordinary like drinking a cup of coffee, smoking a pipe, chatting, going about their business, but always in a froth of sadistic lashing out at black characters.

This might seem like the best way to represent the evils of slavery, but it does nothing to convey the horrifying way slavery was systematized and made to seem normal, prosaic, and even morally right in slaveholding states economically dependent on the “peculiar institution.” Supposedly nice people — respectable churchgoing types — owned slaves, believed themselves to be acting as good Christians, and were even convinced they were being kind to black people held in bondage.

Fuqua’s typical way of representing this is to have a lunatic preacher screaming out a twisted rationalization of slave ownership, claiming God demands the slave dedicate himself to his master, while slaves conscripted to build a railroad are worked to death all around him. Seemingly unable to hold back from conveying everything in melodramatic action-adventure mode, Fuqua has trouble locating characters in any kind of verisimilitude, even while shooting on location in scary Louisiana swamps. And Will Smith embraces his superhero-slave role in a showy star turn, always bigger than life in his character’s superior strength, courage, wisdom, endurance, and spiritual power. It becomes embarrassing fast.

This is an unfortunate mismatch of promising source material with the wrong talent trio in Collage, Fuqua, and Smith. Give it a miss, is my advice.