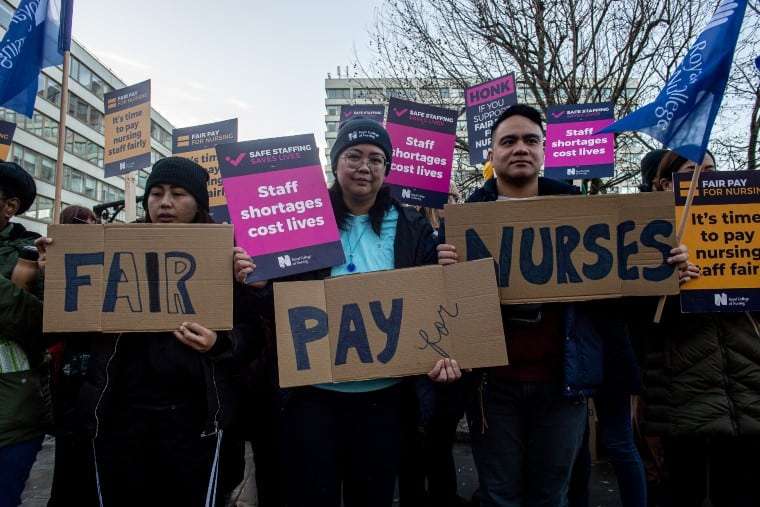 Striking nurses on the march to save the NHS  (Picture: Guy Smallman)

The NHS is going through hell. From hospitals across Britain come horror stories of elderly patients lying on trolleys in corridors for days on end, waiting for a bed on a ward. People are dying in ambulances after hours spent in a seemingly endless queue. All the while harassed staff are being pushed far beyond their breaking point, desperately trying to cover for thousands of unfilled posts and a crumbling care system.

It’s a terrifying situation that looks set to get worse. The head of the Royal College of Emergency Medicine, Dr Adrian Boyle, says the cost of the crisis can already be measured in lost lives. “We think between 300 to 500 people are dying as a consequence of delays and problems with urgent and emergency care each week.

The Sunday Times newspaper reports that dozens of NHS Trusts have declared “critical incidents” in the past week.  That means operations cancelled, staff moved to wards and specialisms they are unfamiliar with, and patients doubled up in cubicles and side rooms.

In Bedfordshire, managers said, “There is a real possibility that we will need to erect tents in hospital grounds”. The immediate source of the disaster is a combination of cases of flu, Covid and other respiratory diseases leading to a large surge in the number of seriously ill patients.

But behind this stands a decade of Tory cuts. Even if there was more capacity, there are simply not the staff needed to use it. There are now a record 133,400 unfilled vacancies at Trusts in England. That means almost 10 percent of all posts are unfilled. The picture is similar in both Scotland and Wales.

That’s why NHS workers are right to say that strikes over pay are also about defending the health service. Tory health minister Steve Barclay tried, just before Christmas, to deflect anger at the perilous state of the NHS by attacking strikers. He said ambulance workers’ walkouts were a “conscious choice to inflict harm on patients”.

Steve Thompson is furious at his remarks. The paramedic was on strike at West Midlands Ambulance Service just before Christmas. “If Barclay was a doctor and the NHS his patient, he’d be struck off,” the Unite union rep told Socialist Worker.

But, he says, Barclay’s insult is a sign of growing Tory frustrations. “They’ve got no idea about how to deal with the NHS strikes, so now they are pointing the finger at the unions when they know this mess is their own fault,” he said. “We’ve got to hope that by taking action we’ve helped the public ­realise this government is not fit for purpose.”

‘I’m striking for colleagues and patients’—nurse speaks out

NHS strikes by nurses and ambulance workers just before Christmas were a blast of fresh air amid the atmosphere of health service decline and decay. They are the best possible antidote to all the Tory savagery of cuts and enforced leaching. Unions now say they will escalate action this month.

Ambulance workers in the GMB and Unison unions are set to strike for 24 hours on Wednesday 11 January. Unison struck for just 12 hours last month. That will mean that only category one and life-threatening category two emergency calls will be answered.

Nurses in the RCN union will also return to picket lines too. They plan to strike on Wednesday 18, and Thursday 19 January, with far more workers involved than during the first round. The right wing press will doubtless try to whip up anger against the strikers for any pain or loss of life. They will try and say ambulance queues and packed wards are the fault of the strikers.

But no one should be fooled by this. Every normal working day people are dying because of the effect of Tory cuts. Strikers are doing their best to save the service.

That’s why it was wrong that leaders of the GMB union called off a planned ambulance strike on 28 December. The union said it suspended its action so people could “enjoy Christmas without any additional anxiety”. But the move is a dangerous concession to the idea that strikes are to blame for the NHS crisis. It is vitally important that other unions that come under pressure do not repeat this move.

RCN member Emma, a nurse at Newcastle’s Royal Victoria Infirmary, explained, “I am striking not just for myself but for colleagues and patients,” she told Socialist Worker. “There are staff that never have the full complement of safe staffing levels. “They are exhausted. They are burnt out. And they come in and have to spend the first part of the shift showing strangers around who have filled in for the care.

“It’s unsafe to be doing that, and it’s not fair on the staff.” The vital task for socialists is to turn the overwhelming public sympathy for striking health workers into even more solidarity action.

The SNP government in Scotland has imposed its below-inflation pay offer on thousands of NHS staff after nurses yet again rejected a shoddy deal. Members of the RCN nurses’ union voted by 82 percent to throw out the government’s “best and final offer”.

The imposed plan lifts the pay of many nurses by less than half the rate of inflation, with the most senior and experienced staff getting the least. Nevertheless, leaders of health unions in the rest of Britain nodded approvingly at the deal and said they’d likely settle their claim if the Tories in Westminster matched it. The large Scottish vote to reject shows that this would be a massive mistake.

Another below-inflation offer would do nothing to help solve the recruitment crisis or help health workers struggling with the rising cost of living.The union was expected to announce strike dates as Socialist Worker went to press. Its leaders must show the same level of commitment to fighting as its members.

The only way the SNP government will be shifted is if nurses take hard-hitting action right from the start.

The Tories are planning to raise NHS pay by just 2 percent next year. That’s the shocking conclusion of reports of ministers’ submissions to the “independent” NHS pay review body.

Such a pay plan would mean yet another substantial real-terms pay cut.  The RPI measure of inflation for the year starting this April is predicted to be between 11.6 and 10.7 percent, according to analysts at Statista. Health secretary Steve Barclay wrote to the review body in November last year to give them their remit, and what percentage of the NHS budget he expects pay to account for.

The NHS Confederation hospitals body, and others, say that because England’s NHS budget for the year ahead is already set, they can calculate that he wants to impose a “rise” of between just 2 and 3 percent. Tory ministers have repeatedly told unions they consider this year’s pay as a “closed matter” and will not negotiate.

They have suggested they may offer an improved deal in the next pay round, scheduled to hit pay packets at the end of April this year.But this revelation shows what a sham such talk really is.

Physios limber up for fight

More groups of NHS workers are preparing to join the great pay fight. Physiotherapists in the CSP union are set to announce rolling action after winning strike votes and passing turnout thresholds at more than 100 Trusts in England. Plans are in place for a “second wave” ballot of workers at other Trusts and for action in Wales.

Union leaders say they expect strikes to start at the end of January. Claire Sullivan of the CSP said, “Every day I see the damage being done by the workforce crisis, with long waiting times, overstretched services, and exhausted staff struggling to make ends meet.

“It simply cannot continue, and the government must make an improved pay offer.”