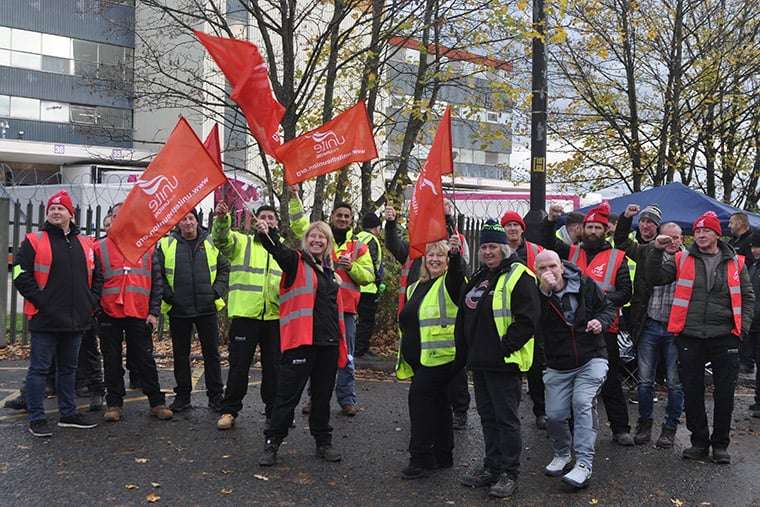 All out at Arrow XL

The 350 Unite union members are paid the minimum wage and have been striking since 24 October over pay.

Bosses of the delivery firm have offered a 5 percent rise.

Over 100 strikers and their supporters turned out on the picket line in Wigan on 28 December. Unite strikers were joined by the RMT, CWU, Unison unions, and Bolton and Wigan Trades Councils, and other Unite workers.

Most Arrow XL workers are attached to four hubs which are in Airdrie, Enfield, Wigan and Worcester.

University workers in the UCU union are fighting to get effective action to win their fight for better pay, pensions, conditions, equality and against casualisation.

A statement from UCU  general secretary Jo Grady has recommended that workers hold 13 days of strikes spaced out over six months. The statement describes the plan as a “more professional, detailed, and robust plan to win”

On Twitter, Dr Francesca Berry wrote that this new plan is “The same strategy that hasn’t worked for the last three years or so. Spreading across many months the financial impact of striking just spreads the cost while university bodies UCEA and UUK continue to look the other way.”

The statement claimed the new plan was “much more in line with the successful management of national disputes, such as we are seeing with the RMT and the CWU.” But these strikes have not yet broken through.

Indefinite action, which the union’s Higher Education Committee (HEC) voted for, combined with a marking and assessment boycott, is the way to win. The next branch delegates’ meeting (BDM) is set for Tuesday of next week.

UCU Left, which Socialist Worker supports, called for increased democracy. It wrote that branches should  “organise meetings for the BDM and express their views through motions. Then those views must be debated at the BDM. Strikes of this scale need an elected national strike committee to coordinate between branches and decide whether to pause or resume action.”

Step up the action to win in Scottish schools

Teachers are set to strike across Scotland next week as they fight on for a 10 percent pay rise.

On Tuesday the EIS union has called out  all its primary, special schools (primary and primary/secondary), and early years teacher members across Scotland for a 24-hour strike.

The next day all EIS members in secondary and special schools (Secondary only), plan a day’s strike.

Then from 16 January sections of teachers will strike on 16 consecutive days with workers in two local authorities on strike on each of these days.

Teachers have not received a pay rise for 2022, despite being due for a pay increase in April. EIS general secretary Andrea Bradley said, “What Scotland’s teachers have been offered by the Scottish Government and local authorities’ body Cosla amounts to a record real terms pay cut of up to 11 percent in a single year.”

Teachers reacted enthusiastically to the first strike last year. The present very mild escalation is welcome but won’t win unless there are more hard-hitting strikes.

Full details of which authorities are out and when at bit.ly/EIS0123

Bosses at BT announced a new programme of cuts just days after agreeing a deal with CWU union leaders last month to end a fight over pay.

The company said it would cut management and support jobs, as well as some services, in an effort to “save” £100 million by 2025. It’s part of plans to make cuts of £3 billion by then.

The announcement came after BT workers in the CWU union voted by 81 percent to accept a deal to end a fight over pay. The centre of the deal was a flat rate pay increase of £3,000 over 17 months.

That’s a real-terms pay cut for all workers. But CWU union leaders championed it as the best they could get after a series of national strikes. Worryingly, union leaders also hinted at a return to cooperation with bosses when they announced the deal in November.

“As part of the conversations with BT we have agreed to renew and strengthen the way we work together,” they said.

“This will be important as the company seeks to deliver its commitment to reduce cost and improve efficiency.”

Yet many CWU activists in BT were angry during the dispute that bosses had got away with years of job cuts and attacks on working conditions while union leaders negotiated.

Their strike—the first in some 30 years—should be turned into the start of a new era of fighting back in BT.