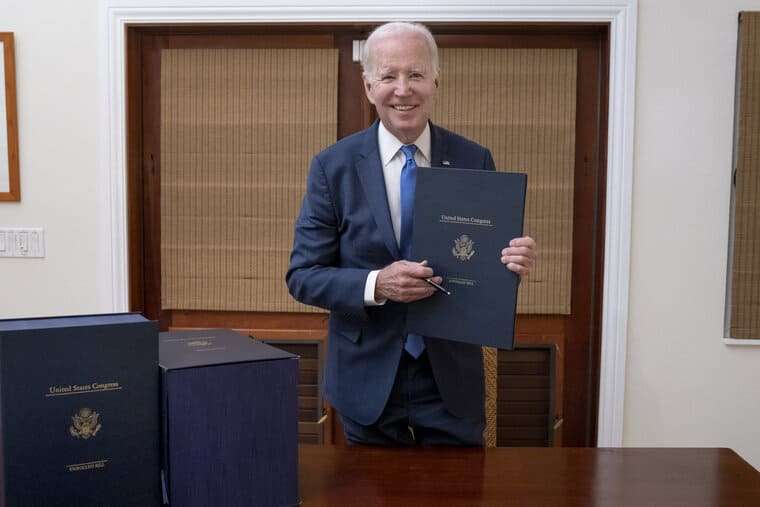 US president Joe Biden with his budget for Ukraine war (Picture: Flickr/ The White House)

Buoyed by massive US, British and European military ­support, Ukraine’s leaders are ­determined to step up the bloody war against Russia. And Russia’s Vladimir Putin is also refusing to withdraw the troops who invaded Ukraine in February last year.

In a new year message, Putin said he had no intention of leaving the areas Russian forces have seized and annexed—despite several major reverses in recent months. Instead, Putin is preparing to send hundreds of thousands of new troops into the horrors of the fighting.

In an address to Ukraine’s parliament at the end of December, Ukrainian president Volodymyr Zelensky boasted that in the first ten months of the war, his country pushed the West to “find itself again”.

“We helped the West return to the global arena and feel how much the West prevails. No one in the West is afraid of Russia anymore and will never be,” Zelensky said. He gloried that there is intense pressure to line up behind the West’s proxy war—“We helped Europe and most of the world feel that being neutral now is, pardon me, immoral.”

But this ignores the reality that large parts of the Global South have not signed up to the US’s ­imperialist agenda. Zelensky vowed that Ukraine’s “military-industrial complex” would become one of the best in the world.

More weapons are coming from the US. At the end of last year the US Congress and president Joe Biden pushed through a budget of £711 billion for the military. That was more than the £640 billion federal budget for domestic programmes including health care, education, housing, mass transportation and many social benefits.

There is an additional £31 ­billion earmarked for Ukraine. This brings together financial support for the government and money for weapons. And a senior general has admitted openly for the first time that British Royal Marines have taken part in covert operations in Ukraine.

Lieutenant General Robert Magowan said that the commandos supported “discreet operations” in a “hugely sensitive environment”. He said that their missions carried “a high level of political and ­military risk”. Magowan is the former ­commandant general of the marines. He wrote in the Globe and Laurel, the official publication of the unit, that 350 marines from 45 Commando were sent to escort diplomats from the British embassy.

That was at the beginning of last year when it became clear that Russian troops were massing for an invasion. Some have then taken part in training inside Ukraine as part of the proxy war.

Strikes as regime cracks down on protest in Iran

Sections of oil workers at the major Abadan oil refinery in Iran struck on Saturday of last week, while workers in other parts of the country took part in protests. The strikes come alongside a protest movement against the regime’s authoritarian rule.

It’s part of a series of strikes by workers that have often coincided with major days of protests by the movement against Iran’s government. Protests began last year against a law forcing women to wear the headscarf in public, and quickly grew into a challenge to the whole regime. The government and state forces have reacted largely with repression.

Security forces fired on thousands of mourners in Javanrud, a city in Iran’s Kurdish region, last Saturday. The mourners had gathered for the funeral of seven people killed during protests. The Kurdistan Human Rights Network reported that soldiers from the Iranian Revolutionary Guards Corp patrol and raid the city’s streets to stop protests.