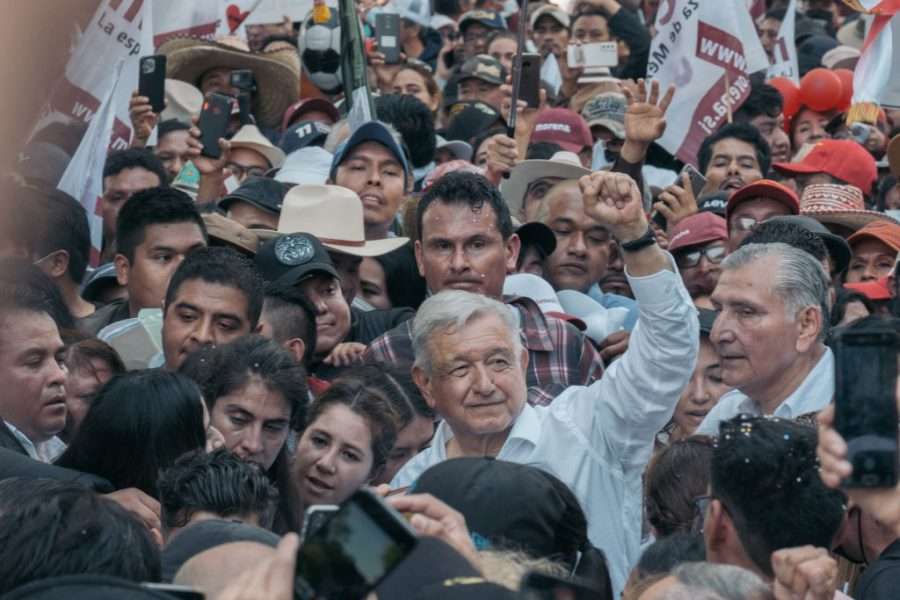 President Andrés Manuel López Obrador rose to power on the promise of massive redistribution. So far, he has nationalized lithium stores and lifted the minimum wage by 20%. But to secure these reforms he’ll need to transform the power structures of the Mexican state and media.

Along the city’s Paseo de la Reforma avenue, a festive march proceeded in seemingly unending waves. Drumming groups combined complicated rhythms with synchronized movements. Brigades of stilt-walkers swooped their capes and showed off their costumes. Musical groups, such as the Santa Rosa Philharmonic Band from the Mixe region of Oaxaca, regaled the public with melodies from across the country. There was traditional and spontaneous dance, calls and chants, university and union groups, and organized contingents by state.

Toward the front, the president marched without security, jostled among the push-and-pull of the crowd. At the end of the route, following a day of marching added to overnight bus rides for many, the festival poured into the bars and restaurants of the historic downtown like a politicized Oktoberfest. A sweaty and sunburnt AMLO, for his part, went on to give an hour-and-a-half speech outlining the achievements of his administration in terms of social programs, energy sovereignty, infrastructure, health policy, and more. Ever at the ready to coin a new phrase, he concluded by baptizing the philosophy undergirding his movement as “Mexican humanism.”

Notably missing from the massive, sprawling event were the expressions of hatred, racism, and classism that had characterized a smaller opposition march two weeks before. In a quick turn of linguistic recycling, the president’s supporters took the most notable insults leveled at them from the prior gathering — naco (tacky, lowlife), indio (Indian), and pata rajada (literally “cracked foot,” a reference to the split-open soles of shoeless peasants) — and appropriated them as their own in sign and slogan.

The much-hyped “polarization” played up by the conservative press had retreated to its trenches on social media, not to be found here among this jubilant and peaceful crowd, which included many immigrants who had risked returning from abroad just to attend.

The Year in Review

There is, indeed, ample cause for celebration. The Fourth Transformation is rounding out its fourth year with some solid numbers: economic growth is outrunning predictions; foreign direct investment is up while external debt payments are down; the peso was the among the most appreciated currencies against the dollar in 2022, confounding speculators who repeatedly bet against it over the summer; and unemployment is declining, despite rising interest rates. On the political front, the president remains popular and his party, MORENA, is in a strong position in early polling for the 2024 presidential election.

Even the Economist, easily the most hysterically anti-AMLO voice of the Anglophone press, has been forced to concede Mexico’s strength among OECD countries in a comparison of economic indicators for the year.

On the policy front, prominent victories this year included a 20 percent hike in the minimum wage — continuing a series of annual jumps that are set to double the wage in real terms by the end of AMLO’s six-year term — and a doubling of mandatory paid vacation days from six to twelve (up to a maximum of thirty-two days, depending on consecutive years of employment).

In April, Mexico nationalized its lithium stores, which are among the largest in the world. This was part of a one-two punch in energy policy that saw AMLO’s Electric Industry Law, which increases public control over the national grid, ruled constitutional by the Supreme Court. That same month, AMLO handily won the nation’s first-ever recall election, fulfilling a campaign promise to submit to one halfway through his presidency.

Not surprisingly, the largest international headlines focused on foreign affairs. In May, AMLO warned that he would refuse to attend the Summit of the Americas in Los Angeles unless every Latin American country was represented; the resulting tizzy by State Department apparatchiks spilled over several messy weeks until the Mexican president followed through with his pledge to sit it out (at the same time, however, he continues to push for a continent-wide integration of Latin America with the United States and Canada, which could lock the region into a straitjacket from which there would be no escape).

In an Independence Day speech in September, he took an independent line on the war in Ukraine, criticizing the ineffectiveness of the United Nations, and the suffering produced by both sanctions and arms shipments. One cannot avoid the suspicion, he concluded, “that the war is being stoked by the interests of the arms industry.”

And in December, AMLO held firm against the congressional coup against Pedro Castillo in Peru, refusing to recognize the de facto regime of Dina Boluarte while the United States and Europe were rushing to do so. On December 12, Mexico signed a four-country communiqué — together with Argentina, Bolivia, and Colombia — decrying the harassment to which Castillo had been subjected from the beginning of his presidential term and calling on the popular vote that elected him to be respected. On December 20, the Boluarte regime expelled the Mexican ambassador, Pablo Monroy. The following day, Castillo’s wife and children arrived in Mexico, the latest in a long tradition of political refugees to receive asylum in Mexico.

In the hours after Castillo was jailed, a well-financed Twitter hashtag cropped up in Mexico: #SiguesTuAMLO (You’re Next, AMLO). Inspired by both the events in Peru and the jail sentence delivered against the Argentinian vice president Cristina Fernandez de Kirchner the day before, the coup-loving Latin American right sought to seize the moment by fomenting an artificial domino effect on social media.

AMLO is in no danger of being removed from office, and he openly mocked the hashtag at his morning press conference the following day. But when soft coups have become the weapon of choice by elites across the continent — Brazil, Paraguay, and Bolivia, to list some of the highest-profile examples over the last decade — the question must be asked: what measures are being taken to prevent such a power grab in Mexico?

For despite the positive reforms, the essential power structure in Mexico remains very similar to what it was in 2018. Although starved of the public advertising budgets that kept it in comfortable collusion with prior governments, the corporate press oligarchy remains in firm control of radio, television, and print media, keeping up a steady drumbeat against any politician or public figure who deviates an inch from the orthodoxy. A handful of multinational banks control the nation’s deposits, loans, and pension funds, despite advances in a public banking option. The Catholic Church, albeit less brazenly than in years past, remains an important power behind the scenes. Academia and official cultural circles are dominated by conservatives masquerading as “holier-than-thou” progressives.

Big business continues to control key natural resources in the form of mining concessions and water rights. The vast majority of wrongdoers from previous administrations remain unpunished. And the armed forces, for their part, have never been stronger: awash in budgetary increases and a growing list of side gigs, the military will soon be adding to its list a new commercial airline and administration of the new national park at the Uxmal archeological site.

At times it seems that there is no new public project anywhere in the country that the secretary of defense doesn’t have a hand in, one way or another. And while AMLO insists that this is to ensure that these projects don’t get privatized in the future, the extremely reductive binomial of “privatization-or-military” is beginning to wear thin — especially on top of the constitutional amendment passed this year to allow the armed forces to continue to perform policing functions for four more years, until 2028. Arguably necessary in the face of the dire state of policing and the potent firepower of cartels, it remains a bitter pill to swallow.

Of course, four years is not enough to undo forty . . . or four hundred. And it is undeniable that these years of struggle and political triumph have propitiated an enviable politicization among the public — a major feat in itself. But there appears to be an illusory confidence in the followers of “Mexican humanism” that the exercise of liberal freedoms and a dollop of redistribution will be enough to dissolve deep-seated power structures. So great was this optimism that one of AMLO’s key reforms in 2021 was the removal of immunity from prosecution for the president. Designed to hold the chief executive accountable for corruption and crimes committed in office, the measure also opens the door to their destitution on any kind of trumped-up charge.

In summary, then, it is worth asking what kind of a package AMLO will be leaving to a future MORENA administration if his party goes on to win, as it currently appears, in 2024. The president is an astute political operator and a uniquely gifted communicator; his successor may very well not be. And the jackals in constant prowl around the National Palace will not simply be persuaded to go away. For all of its popularity, the Fourth Transformation does not have the luxury of saying “it can’t happen here.”