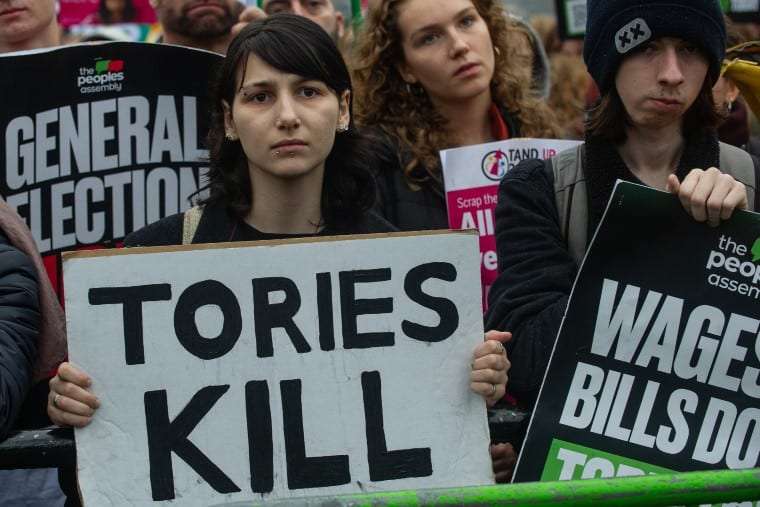 Tories will use an economic crisis to crush repression (pic: Guy Smallman)

With a new year comes increased suffering and attacks from the top—but also chances for resistance. In 2023 a third of the global economy will be in recession, according to the International Monetary Fund. Its head Kristalina Georgieva said this is down to leading economies, including the US, China and EU, slowing.

This is partly due to the war in Ukraine, the spread of Covid and strict lockdowns in China, rising prices and higher interest rates. Half of the EU will be in recession, and for countries not in recession “it would feel like” they are.  At the same time Britain is predicted to face one of the worst recessions and weakest economic recoveries in the G7 group of rich nations.

Britain’s gross domestic product — the usual measure of a country’s economic success—is already shrinking by 1 percent, compared to 0.1 percent in Europe and growth of 0.25 in the US. As a result, household incomes will be squeezed, real wages will continue to fall, and soaring food and energy prices will be met with higher borrowing costs.  Interest rates will be kept high as inflation persists.

And even when recovery is on its way, failed Tory policy—affecting productivity, investments, collapsing public services and post-Brexit trade—will stifle it. The incoming gloom of recession is predicted to hit harder than the pandemic. But recessions and economic downturns aren’t inevitable or natural. They are caused by the bosses and their reckless drive to make profit at any cost.

In some ways a recession can even be helpful for those in power. A new year’s worth of downward spiral and economic crisis will be used as a heavy stick used to beat workers with.

Unemployment and a shrinking job market will mean worsening pay and conditions, and bosses will jump at the opportunity to use this to keep workers in check. Our rulers will likely use this crisis of their own making to say that now is the time to come together, not strike or fight back. economy

This argument will be used to stop workers from walking out and squeeze potential struggle.  Another argument is likely to be made that more investment in the fossil fuel industry is needed to stimulate economic growth.

Our side can’t sit back and accept this fate. The battles for our class from last year have to be pushed forwards and ramped up in 2023. As the economy worsens in the next 12 months, it cannot be left in the hands of the failing Tories, who have no interest in helping ordinary people, to try to fix. And waiting for Labour’s next electoral opportunity isn’t an option.

The solution is to prepare, organise and fight back now—and not let them fob their crisis off on us any longer.