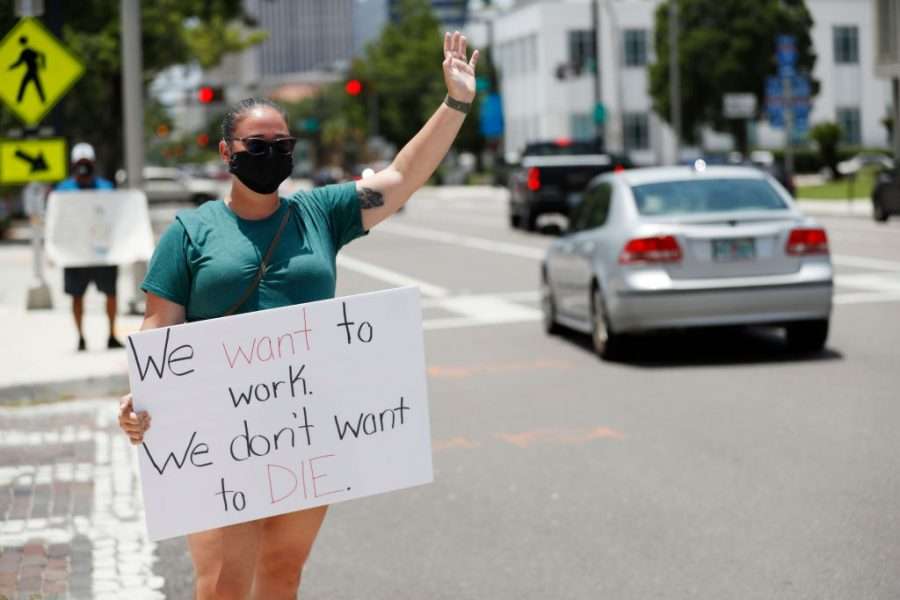 At the height of the coronavirus pandemic, the American working class faced a paradox: workers were told they were “essential” and touted as “heroes,” yet they were often treated as sacrificial lambs.

Excerpt from Essential: How the Pandemic Transformed the Long Fight for Worker Justice (Basic Books, November 2022)

We don’t know — and likely never will — how many essential workers died after contracting COVID-19 at work. We do know that they were disproportionately exposed to the risks and hazards of pandemic life at rates far exceeding the rest of the American population.

Friedrich Engels, Marx’s lifelong collaborator, coined the term “social murder” to refer to a situation in which the ruling class places workers “in such a position that they inevitably meet an early and an unnatural death.” The pandemic was just such a case.

Uniquely positioned between a vulnerable public and a ruthless ruling class, essential workers were celebrated for their contributions to keeping the country running, even as they faced extraordinary workplace risks, hazards, and exploitation — a set of factors that transformed their understandings of themselves as a class of workers. Class consciousness is not a simple recognition of facts about workers’ position in the economy and society, but the outcome of a process that includes external factors that shake them from relative quiescence and spur them to realize their affinity with other workers — and the potential power they hold. Over time, this shared experience led essential workers to see themselves as a group.

During the pandemic, the cognitive dissonance between essential workers’ popular designation as heroes and their actual treatment as sacrificial servants inspired collective action and a distinct awareness of their class interests.

At the same time, differences among essential workers strained unity on the front lines. The classic sociological dividing lines of race, gender, and immigration status were in some sense less significant barriers than were other pandemic-specific obstacles: mass unemployment, the ability to telecommute, occupation, political differences and voting behavior, and popular recognition of one’s essential status. Across the country, whether essential workers cohered as a group or were rent asunder depended on their ability to overcome the deep barriers that divided them from each other.

The process of making and unmaking the frontline class is perhaps the main way we can grasp the relationship between labor and capital during the pandemic.

Scholar Benedict Anderson argued that nations form as “imagined communities.” The members of a particular region might not know each other or ever meet, yet “in the minds of each lives the image of their communion.” Imagined communities don’t simply form automatically but emerge through shared norms, language, values, cultural codes, and common enemies. A similar dynamic happened among essential workers during the pandemic.

Likewise, sociologist Pierre Bourdieu argued that what he called the “labor of categorization” is a “forgotten dimension of the class struggle.” In other words, the struggle to decide who is “in” and who is “out,” in effect, is an important aspect of how classes form.

At times, pandemic essential workers pursued the formation of an imagined community of frontline laborers by organizing across professional and occupational lines. Early on, proximity to risk was the minimum price of entry into the class of real frontline workers, as well as the basis for excluding those who didn’t share that proximity.

Yet there were exceptions. School teachers, who mostly taught remotely in 2020, were often included as “true” members of the essential working class because their labor was considered socially indispensable and their jobs were crucial to allowing others the ability to work. At other times, certain kinds of in-person workers were excluded.

I interviewed hundreds of frontline workers during the pandemic and encountered widespread discrimination against fast-food workers by many other low-wage frontline workers, a reflection of long-standing falsehoods about the intelligence, work ethic, and employability of that labor pool. Even in the same workplace, like a hospital, it was common for workers to construct a hierarchy of essentiality, from emergency room nurses at one end to specialized technicians who didn’t interact with as many patients at the other.

Most workers I interviewed derived a sense of pride from being a frontline worker. They saw how public sentiment favored them, probably for the first time, and got a renewed sense of satisfaction and purpose from their roles. Many remarked on the ways they were treated with greater levels of respect on the job yet regretted that it took a global pandemic for customers and policymakers and the general public to see service workers as deserving of appreciation. Early in the pandemic, this positive change in the public’s perception of them led many essential workers to feel a stronger sense of solidarity and community with each other.

Others appreciated the honorific of being called essential, but their resentment toward their working conditions gave them a more ambivalent view of what “essential” actually meant in practice. “Guinea pigs,” “lab rats,” “crash test dummies,” “human shields,” “sacrificial lambs” — many essential workers used these terms to describe their status in the social hierarchy. These metaphors of disposability reflect the deep bitterness and indignation workers experienced.

Workers’ hero status during the pandemic conferred a rare degree of respect and appreciation, but it wasn’t enough to secure them safety and dignity.

“There was an awakening,” Tre Kwon, a nurse at Mount Sinai Hospital in New York City, told me. “Sometimes it just takes a spark. People realized that all of us out there working shared something, a common experience. It was uneven and imperfect, but it happened.”

A Pandemic Class for Itself

The pandemic provided the spark, spurring frontline workers to understand themselves as a group with common interests. Forged in the crucible of the crisis, a class “for itself” emerged in fits and starts.

Newly radicalized, essential workers across the nation launched protests for better working conditions, with and without the support of unions. As the pandemic went on, essential workers increasingly joined forces. Teachers spoke up for food workers, grocery clerks for delivery drivers, meatpacking workers for farmers, doctors for nurses, and nurses for students.

During an April 2020 rally by teachers to oppose reopening public schools, Jillian Primiano, an emergency room nurse from Wyckoff Heights Medical Center in Brooklyn, called attention to the way nurses understood the plight of teachers being forced back into dangerous classrooms. “As nurses, we know you will be short on supplies and staff as billionaires continue to not pay taxes, throwing us small donations here and there and patting themselves on the back,” Primiano told the crowd. “We know that you will bear the brunt of idealistic policies that only look good on paper. . . . They’re gonna call you heroes while they don’t give you what you need to do your job.”

Yet even as frontline workers expressed support for each other, forging broad working-class unity proved to be messier and more complicated. Risk and exposure to the virus separated frontline workers from so many others in the working class, most notably the unemployed. Frontline workers’ attitudes toward the unemployed evolved dramatically over the course of the coronavirus crisis. Early in the pandemic, many essential workers sympathized with those who were laid off and viewed their struggles as coterminous. As the pandemic progressed, however, essential workers increasingly doubted that their struggles resembled those of the unemployed.

From March to July 2020, my interviews featured no anti-unemployed stigma. It was clear to all that those applying for unemployment insurance were suffering along with everyone else, and that joblessness or destitution in some cases was hardly a balm for not having to work on the front lines.

As the economy slowly rebounded, however, and the virus rippled through communities in wave after wave, frontline workers’ resentment against the unemployed, who were increasingly portrayed as avoiding risk in much the same way as those working from home, grew.

Bashing the jobless has long been a national pastime, built upon the idea that some people get something — a generic idea of welfare — for nothing. The pandemic inspired a new take.

In part because the frontline class was so multiracial, it became harder to link grievances about race and unemployment together. The content of these new complaints wasn’t that the unemployed were lazy but that they were unfairly safe. The typically flaunted work ethic was supplanted by a substitute ideology of risk-taking.

This resentment was magnified after the Biden administration extended unemployment benefits in early 2021, guaranteeing a $300-per-week unemployment relief check. In many ways, it paid to stay home. The relief programs were necessary and good, and, in many cases, still not enough. But they also served to fracture the working class, dividing frontline workers from the unemployed and preventing broad class solidarity.

“No way somebody sitting at home deserves more than someone out there on the front lines,” said Francisco, a slaughterhouse worker from Colorado. “When we say we’re essential workers, we mean the people actually working.”

“We’re not all in this together,” Caroline, a nurse from Buffalo, New York, told me. “Some of us are working our butts off and some of us are sitting on them.”

There was a parallel movement among the public too. As the pandemic progressed, many Americans shifted from supporting “our essential heroes” to decrying that “nobody wants to work anymore.” This rapid change in temperament exposes how flimsy and superficial public support for essential workers actually was, underscoring why the cognitive dissonance of those workers was so intense and justified.

Tectonic shifts in class politics both formed and dissolved an essential working class during the pandemic. The hero status that workers earned conferred a rare degree of respect and appreciation, but it wasn’t enough to secure them the kinds of actual benefits they needed to do their jobs safely and with dignity.

“We don’t know how to effectively treat COVID-19 yet,” Primiano, the nurse, said at the April teachers’ rally. “But we do know how to prevent it. Every time rank-and-file workers stand up to demand policies that prevent the spread of COVID-19, you’re saving lives that medicine cannot save. If you teachers don’t get what you need, you should strike, and healthcare workers and other essential workers should stand behind you . . . and demand that the working class stop paying for this pandemic with our lives.”