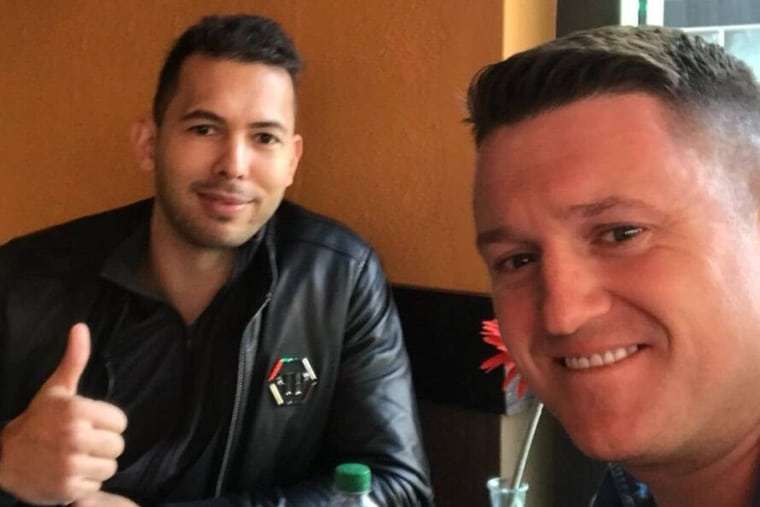 The self-proclaimed “king of toxic masculinity” Andrew Tate, being held in custody for 30 days on human trafficking charges, has links to the British far right.

Tate was arrested with his brother Tristan and two others in the Romanian capital Bucharest last Thursday as six women say they were sexually exploited by them. The investigations also include organised crime and rape charges.

Far right thugs such as the Nazi Tommy Robinson have rushed to his defence. Robinson posted a video to tell his fans to “question everything”.

He called Tate a “voice against the Matrix.” Tate previously joined the Nazi in harassing journalist Mike Stuchbery. Robinson and Tate both turned up at Stuchbury’s door, after the journalist campaigned against the Nazi. Tate also associated and posed for photographs with far right politician Nigel Farage.

In 2016, Tate was removed from the television show Big Brother after a video showed him attacking a woman. He has said women should “bear responsibility” for being sexually assaulted, that women “belong in the home” and are “property” of men.

Describing how he would react if a woman accused him of cheating, he said, “It’s bang out the machete, boom in her face and grip her by the neck.”

A review into the racist Prevent agenda, set to further scapegoat Muslims and downplay far right organisation, has been delayed amid Tory rows. Prevent, a government programme that monitors signs of “extremism”, was intended to target mostly Muslims for surveillance and punishment.

The delay is due to an argument between home secretary Suella Braverman and communities secretary Michael Gove. Gove wants the report released in full, with names of “extremist” organisations, or those supporting “extremist narratives” published. But Braverman says this will lead to libel lawsuits.

Journalist William Shawcross is heading the review. He said Islamist extremists are “severely under-represented” in Prevent investigations and that there is an excessive focus on the right wing “above and beyond the actual threat it poses”.