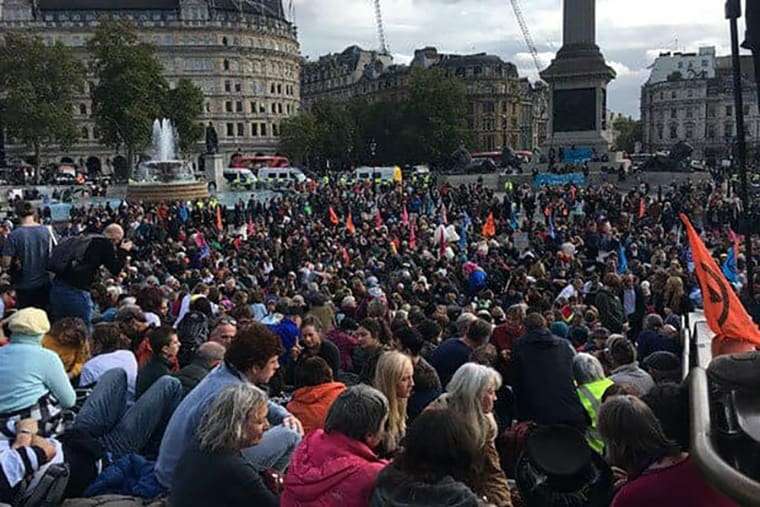 The group’s leaders set out a resolution to “prioritise attendance over arrest and relationships over roadblocks” in a statement headlined “We quit”. It said that Extinction Rebellion is “committed to including everyone in this work and leaving no one behind, because everyone has a role to play.”

Extinction Rebellion is calling for 100,000 people to surround the Houses of Parliament on 21 April. “What’s needed now most is to disrupt the abuse of power and imbalance, to bring about a transition to a fair society that works together to end the fossil-fuel era,” the Extinction Rebellion statement read.

Alex, a long-standing member of Extinction Rebellion, explained to Socialist Worker why the group decided to make this shift. “We want large numbers of people to show support for our demands,” he said. “We want to show there is broad public support for our cause. This means we need to get bodies on the ground.

“It felt like we were flatling with the strategy we were taking. We can’t keep doing the same thing again and again and expecting it to work. We need to experiment with different approaches.”

“We need to use mobilisation in April to change the conversation. We want to reassure people that we’ll make April as legal and inclusive as possible.It can be an opportunity to get as many different groups together including unions, and we can use it as a platform to get to know each other.”

“We have seen what the right wing press has done, and now unfortunately a lot of the public doesn’t like us. We have to keep listening to ordinary people.”

Aside from public opinion, another reason for the shift may be the force of state repression—more laws and more jailings of direct action climate activists. Retreat in the face of such pressures is an unwelcome sign of how the Tories have achieved part of what they wanted through measures such as the Police bill.

The government sent 138 Just Stop Oil supporters to prison in 2022, and at the end of the year, 12 were still inside. The power of such measures is in part a result of activists’ isolation and because of a lack of support from the Labour Party and trade union leaders.

But there’s also a political issue at stake. Disruption is good and should not be rejected.

This week’s rail strikes will “inconvenience” and disrupt many more people than everything Extinction Rebellion and Just Stop Oil have ever done. But the strikes, and the climate protests, are wholly justified.

Gwen—not her real name—supports Extinction Rebellion and is currently involved with other climate groups, such as Just Stop Oil (JSO) and Insulate Britain (IB). She told Socialist Worker that she was “disappointed” by the statement.

“I really wasn’t clear about what the statement was really about,” she said. “I don’t really understand why Extinction Rebellion is declaring it’s quit and laying its cards out on the table. I think one reason it could have done this is that it thinks that more people might be attracted to join XR if is are seen as more ‘respectable’.

“It says it wants to mobilise 100,000 on the street in April. Perhaps this is the way those at the top of Extinction Rebellion think they are going to do it.” Gwen added that this statement might, in part, be a way of XR distancing itself from the direct action tactics of groups such as JSO and IB.

Socialists must join and help mobilise for the rebellion outside parliament from 21 April. Extinction Rebellion was at its strongest and mobilised the most people during its first rebellion in 2019 when the group combined mass participation with civil disobedience.

The rebellion was disruptive. Central London was brought to a standstill. It was radicalism, not retreat, that meant that Extinction Rebellion could do this.

Building a larger and more militant climate movement that allies itself with the ­workers’ movement is essential.

No time for moderation

Former spokesperson and prominent member of Extinction Rebellion Rupert Read and others are pushing a new group Moderate Flank, which is set to launch this year.

In the Guardian newspaper last year, Read outlined his plan to bring together lawyers, insurers, and business leaders with activists in a “broad” response to the climate crisis. The Moderate Flank quickly Tweeted out its support for Extinction Rebellion’s latest strategy.

But Just Stop Oil said, “As we welcome in the year ahead, everyone who recognises they are living in a pivotal moment, now has a duty to join those in civil resistance. This is not about polar bears and puffins, it’s about who gets to eat and how we will survive.”