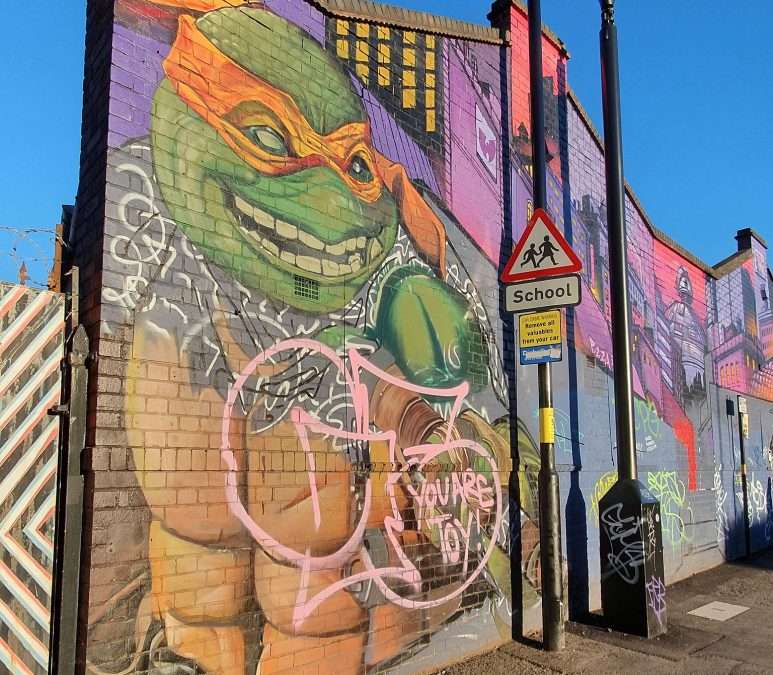 The Right has successfully framed “canceling” as something leftists do. But it’s the snowflakes on the Right who have typically led the charge to censor culture. Case in point: when Britain lost its mind over the Teenage Mutant Ninja Turtles.

An oft-repeated right-wing claim today is that the Left has produced a “cancel culture,” where individuals, companies, and creative works are at risk of being deemed beyond the pale if they transgress the boundaries of “wokeness.” But “canceling” films, television shows, books, and musical acts has long been a tradition of the conservative right on both sides of the Atlantic.

One of the more unusual examples is the late 1980s moral panic over ninjas and martial arts weaponry, which meant that when Teenage Mutant Ninja Turtles first appeared in the UK in 1990, it was rebranded as the Teenage Mutant Hero Turtles. Though this incident has been forgotten by many, those who were children around this time remember it well.

To explain how the UK ended up with the Teenage Mutant Hero Turtles, we need to look at concerns about portrayals of violence in film and television in the 1980s and the “law and order” agenda of Margaret Thatcher’s Conservative government. The moral panic about violent martial arts and their depiction in film was preceded by the moral panic about extreme horror films (primarily from the United States and Italy) being available on home video, known as “video nasties.” With the Video Recordings Act of 1984, many infamous films such as Driller Killer, The Last House on the Left, and The Evil Dead were effectively banned.

There was also a long-standing concern by the British Board of Film Classification (BBFC) about the violence of martial arts movies from Hong Kong and Japan, particularly those involving weapons like nunchucks (also known in the 1970s and 1980s as “chain-sticks”), shuriken (ninja stars), and samurai swords. For example, when Bruce Lee’s Enter the Dragon was rereleased in 1979, the BBFC secretary James Ferman requested that all scenes with “chain-sticks” be removed. This was a particular problem, as a picture of Lee holding nunchucks adorned promotional posters for the movie.

In the wake of the “video nasty” phenomenon, there was a renewed concern about ninja-style weapons and their portrayal in film, television, and books. In the mid-1980s, concern was raised about the sale of ninja-style weapons in martial-arts shops and through mail order, appearing in catalogues and the back pages of magazines. There were claims that people were using throwing stars at football grounds, and this tied into another moral panic about football hooliganism in the 1980s.

In 1986, the Martial Arts Commission in the UK, in conjunction with the government, published new guidelines for traders of martial-arts equipment that endorsed that weapons should not be sold to minors. These guidelines were questioned in parliament throughout 1986 and 1987, with MPs from both sides of the House asking whether new laws were needed to prevent children from getting hold of these “potentially dangerous martial arts weapons.” For example, Labour MP Tony Banks claimed that an eight-year-old boy in Newham had purchased “a device called a Ninja’s claw which is, in effect, a spiked knuckleduster.”

By the time of the 1987 election, the Tories were promising in their manifesto to “strengthen the law dealing with the sale and possession of offensive weapons.” In November 1987, Conservative MP John Patten praised Home Secretary Douglas Hurd for not hesitating to “ban the sale of abhorrent weapons such as death stars, hand claws and similar apparatus from the sick survivalist culture and the wilder shores of the martial arts world” if the legislation was passed.

But banning the sale of these weapons was only part of the moral panic about ninjas and martial arts in Thatcherite Britain, with concerns raised in the media and by politicians about the portrayal of ninjas in film, television, and books, as well as the sale of toys that were imitations of these weapons.

In 1986, the Daily Telegraph ran the headline “NINJA’S LETHAL MARTIAL ARTS CRAZE HAS MPs WORRIED,” and talked about a craze for deadly weapons cultivated by TV shows such as The Masters and films such as Shogun, Nine Deaths of the Ninja, and Ninja Warriors. In the House of Lords, Jack Simon raised his concerns about “Ninja-style toys, which are marketed as suitable for children from the age of three upwards,” including “imitation rice flails and death stars” which, “when used, or adapted, can become an offensive weapon.”

Following on the “video nasties” controversy in the early 1980s, and amid this moral panic about ninja-style weapons on the streets, both the BBC and BBFC made significant statements about their distaste for TV shows and films that portrayed violent scenes involving martial arts or ninjas. In 1986, the BBC stated that martial arts techniques “should only be included with extreme care” as part of new guidelines around the portrayal of violence. Annual reports show that the BBFC had a similar approach, with “a strict policy on the demonstration of Chinese martial arts equipment” requiring that “scenes featuring such devices were cut even at ‘15’ and ‘18.’”

In 1986, the BBFC announced that it would “welcome measures in the new parliament to control the sale of many of the dangerous weapons displayed in violent entertainment.” The following year, the BBFC said that in the wake of the new legislation surrounding dangerous weaponry, “screen depictions of such weapons are bring handled with even greater caution.”

A concern about the glorification of martial arts weaponry and the moral panic over the “ninja craze” led to the Teenage Mutant Ninja Turtles being renamed the Teenage Mutant Hero Turtles when it debuted on BBC 1 in January 1990. Most of the media commentary over the course of the year was about “Turtlemania” and the merchandise being sold to kids, but some newspapers warned about the bad influence that the Hero Turtles were having on British children.

The Daily Mail published a story of a four year old who “nearly bled to death after karate-kicking a glass door as he mimicked his television heroes in the Ninja Turtle cartoon cult.” Over at the Daily Telegraph, Victoria Mather claimed that “youngsters have been rescued from the sewers where they have been either seeking their scaly heroes or the necessary rat and user-friendly patch of radiation to turn themselves into pizza-powered warriors.”

The Daily Express reported that “a nationwide warning to children about the dangers of imitating the Teenage Mutant Hero Turtles” was issued the government’s health and safety executive, concerning children playing in the sewers. An appeal was to be made on Going Live by Philip Schofield and Sarah Greene. The same newspaper also ran a story warning children not to binge on pizza like the Turtles, quoting a doctor who said, “Eating junk food is going to turn the kids into aggressive echoes of the turtles.”

Following on from the success of the TV show, the Teenage Mutant Ninja Turtles movie was released in Britain in the lead-up to Christmas in 1990. Unlike the cartoon on the BBC, the film kept the original name, but according to the BBFC was “shorn of all flails in action and all but the most subliminal glimpses at rest.”

Ferman, still at the helm of the BBFC, called for significant cuts to the film, and as reported in the Guardian, this led to a “lively debate” among the board’s film examiners, with one examiner saying that his nephews felt “the film had been ruined” by the cuts. These kinds of cuts also impacted in the film’s sequel, The Secret of the Ooze, with scenes of Michelangelo using sausages in a nunchuck-style manner excised from the UK release. But “Turtlemania” had faded by the second film (replaced by The Simpsons as the hot new thing, featuring its own accompanying moral panic about crudeness).

It may seem quaint now, but the ninja moral panic was very real in Britain in the late 1980s. This was partially a “law and order” response to claims of hooliganism and street violence involving ninja-style weapons, but also a conservative campaign against a supposedly corrupting influence on children, stemming from the “video nasties” controversy earlier in the decade.

1990, remembered by many in Britain as the year of the Poll Tax Riot and England at Italia ’90, also occupies a place in the popular memory of people in their thirties and forties as an era when the media and politicians believed British children were likely to imitate the behavior of imaginary mutant turtles, and acted, with legislation and a heavy dose of censorship, to prevent them doing so.