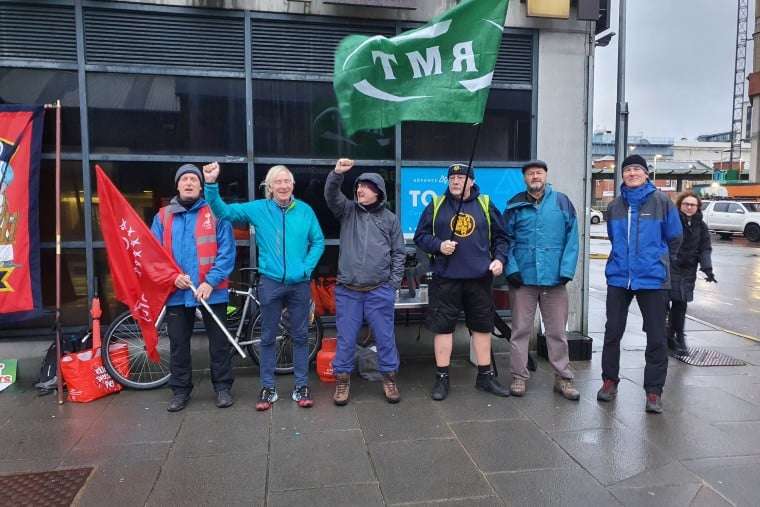 Rail workers across Britain began a week of strikes on Tuesday. They want to force bosses and the Tory government to hand them what they deserve in the battle over pay, jobs, conditions and safety. Most rail workers have not had a pay rise for three years and are also suffering the devastating consequences of bosses who are set on tearing up conditions and slashing vital services.

Around 40,000 workers in the RMT union began a two‑day strike on Tuesday that hit Network Rail and 14 train operating companies.  They were set for a further 48-hour walkout on Friday and Saturday. And on Thursday train drivers in the Aslef union were set to strike at 15 companies.

An Avanti West Coast worker picketing at Euston, in London, told Socialist Worker, “We’re battling on. We’re still here, strong and having a big impact.  “But the government is not interested in ending this dispute, they want the public to continue to suffer.

“It’s because they don’t want to back down. They have an agenda of cuts. They don’t want to lose to the unions. “Our only option is to strike again if the ­government continues to block negotiations. We will probably be on strike each month until May.”  Just 20 percent of trains ran on Tuesday, mostly staffed by managers. In Nottingham pickets said they were in for “the long haul”.

In York one striker said, “It is time to bring out all unions together for a national strike.” Management, bolstered by financial subsidies from the Tories, think they can smash the strike and destroy union resistance. Tim Shoveller, Network Rail’s chief negotiator said an end to strikes is “in touching distance.”

He insisted that the pay offer would not be improved but that the company “only need 2,000 people who voted no last time to change their vote and the deal will pass”. Shoveller has ­admitted that he plans mass job cuts. “The truth is we need to make about 1,850 redundancies to reduce our costs,” he said.

The Tories have tried to convince workers to believe they have no alternative but accept the current offer of massive real terms pay cuts and job losses. Mark Harper, the ­transport secretary, said, “The offer on the table has been accepted by two of the trade unions on Network Rail.

Ministers also hope that if they force through a rotten pay deal it will make it easier to impose new anti-strike laws in transport. Such strategies must be met by escalation, and unity by all the striking unions across the railway. The Tories are vicious, but they are also vulnerable.

Workers have repeatedly shown they back action. An all-out strike, ­combined with a renewed push to involve workers in the strike, to picket and to take part in its running, can win.

RMT London & Anglia Regional Organiser, Kathy Mazur, told Socialist Worker, “The government is trying to break the unions, but we will continue to fight.” She added, “Job security is the main thing and to protect terms and conditions. But workers are in dire straits, we need some pay deal also.”

With inflation rising Kathy said RMT members had “a quiet Christmas” with family but “a busy Christmas on the picket lines”.

Many workers have also participated in an overtime ban which has seen services cancelled. Kathy said, “Rishi Sunak is out of touch. He’ll see that we’re short of staff, the constant delays and overcrowding.” The RMT leaders ­escalated action this round, they must do it again, coordinating with other unions when possible.

A win for the rail ­workers will boost the confidence of all workers in their fight against Tory rule.