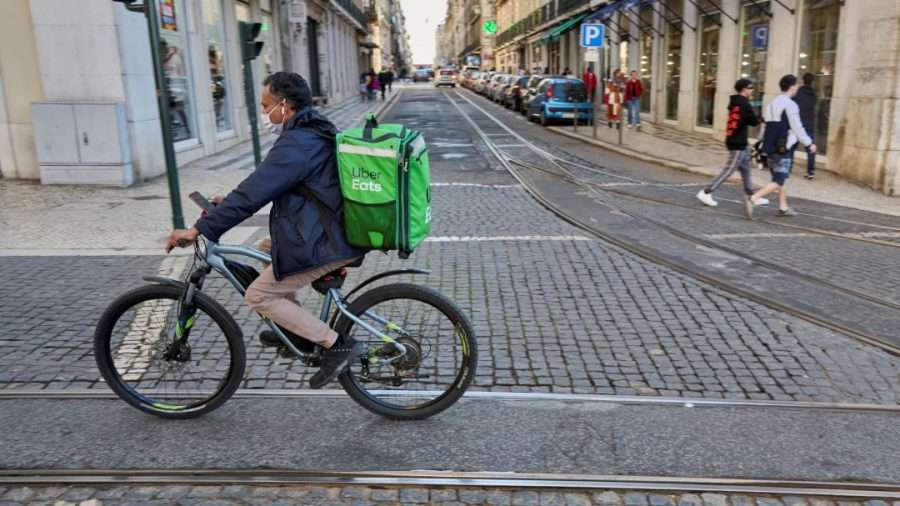 This article is a segment from Paris Marx’s book, Road to Nowhere: What Silicon Valley Gets Wrong About the Future of Transportation (Verso, 2022).

Five years before COVID-19 lockdowns forced people to stay home as much as possible, journalist Lauren Smiley was already writing about how a new wave of companies was creating a “shut-in economy.” These shut-ins weren’t people involuntarily stuck inside or shielding themselves from an unprecedented health crisis; they were tech workers who spent so much time working that they felt they had little time for anything else.

Instead of cutting back and finding a healthier work-life balance, they started using on-demand services for just about everything. They had their meals delivered so they didn’t have to cook for themselves. They got people to go pick up their groceries and sometimes even stock the cupboard. They relied on Amazon and a selection of apps, instead of running out to do errands or pick up their necessities.

Most of these on-demand services were made by people in the tech industry to serve the needs of other people like themselves while taking advantage of an increasingly precarious workforce. But the venture capitalists funding them would never be content just serving that niche market: the companies had to strive for monopoly, and that meant reaching a much wider market.

The big five US tech giants — Amazon, Apple, Facebook, Google, and Microsoft — pulled in a combined revenue of $1.2 trillion in the first twelve months of the pandemic — more than 25 percent higher than the year before. The pandemic also pushed many people to try on-demand services and become more reliant on Amazon. When we look back, we will likely view the pandemic as a key moment in accelerating the shift toward an on-demand economy: one that will have consequences for how we live, how we work, and how our communities function.

The Birth of the On-Demand Economy

The on-demand economy was made possible by the convergence of new technologies and the consequences of the 2007–8 financial crisis. In 2002, Amazon created Amazon Web Services, a cloud computing platform to provide cheap on-demand access to server resources, making it much easier for people and companies to launch new online services. By the end of the decade, other companies like Google and Microsoft were launching cloud solutions of their own, drastically changing the way people interfaced with the internet and the services built on it.

In 2007, months before the financial crash, Apple released the iPhone. The device took a more fully functioning internet away from the desk and placed it in the palm of people’s hands. Initially, developers were constrained by what they could do with the iPhone, until Apple launched the App Store in 2008. That, just as Western countries were coming out of the recession and looking for new ways to drive economic growth, set off a frenzy to create companies that would stake their claims in the rapidly growing app economy.

The so-called sharing economy emerged from that moment; it benefited immensely not just from the new technologies, but other factors created by the postrecession conditions. Newly formed companies had much easier access to capital because of rock-bottom interest rates, which ensured they could lose money hand over fist as they underpriced their services in pursuit of monopoly. Meanwhile, as the economy returned to growth, it didn’t serve everyone equally.

While founders could get financing relatively easily, and tech workers were in high demand, most workers had lost out in the recession. The companies crowding into the sharing economy crafted a message targeted at those people: they could earn a living while retaining control over their hours. The company that defined this new “flexible” space was Uber. It began as a means to hire a private driver in 2009 but quickly pivoted to take on the taxi industry by letting virtually anyone sign up to become a driver — while evading the regulations that applied to the industry.

These companies surrounded themselves with language about sharing and community, but the reality was that they were businesses like any other, though with one important exception: they had the freedom to burn money for years, as long as they could show they were bringing in more customers. In pursuit of that growth, they took advantage of whoever they could — the workers providing the service and the other businesses they relied on.

The services powering the on-demand economy looked great from the consumer side: they were relatively affordable, incredibly convenient, and could be accessed right from your phone. But through their marketing and their design, they also abstracted how the service was delivered and what that meant for workers and the wider community.

Soon, the on-demand economy developed far beyond app-based services. Amazon became a key part of it, offering rapid delivery for Prime members as it built out its own delivery network. But its infrastructure is dependent on worker exploitation: Amazon’s warehouse workers in the United States suffer serious injuries at a rate nearly double the industry average, while their pay is well below what competitors offer. There are complaints about being unable to take bathroom breaks: the company’s delivery workers have reported having to pee in bottles and even defecate in bags because the delivery targets are so high. That’s just one cost of convenience.

Food delivery services like Uber Eats and Deliveroo rely not only on poorly paid workers but also on restaurants to prepare the food they deliver, with the result that as more customers have turned to app-based services, especially during the pandemic, restaurants have had to offer their menus through them. Yet as the delivery services gained more customers, they also gained more power to extract higher delivery fees, sometimes up to 40 percent of the total cost. As fees have risen, many restaurants have had to raise their prices or shut down entirely.

Although the on-demand economy was marketed as serving the common good, that was never truly the case. The services were designed to meet the needs of overworked professionals, and so they have always served a disproportionately well-off group of people while taking advantage of the labor of precarious workers who had little control over their work, were paid quite poorly, and were usually denied the rights and benefits of worker status.

In 2015, Smiley saw this too. “In the new world of on-demand everything,” she observed, “you’re either pampered, isolated royalty — or you’re a twenty-first-century servant.” The rich have always had an array of staff to do the tasks they didn’t want to do, but on-demand services promised to allow a slightly larger group of well-off people to more easily farm out their chores too, taking advantage of a growing class of struggling workers. But in the process, the companies also began transforming the world around us.

Removing the “Friction” of Interaction

During the early stages of the pandemic, many people became “shut-ins” as they were instructed to stay home to minimize the spread of COVID-19. But not everyone had that luxury. Health, transport, and supermarket workers were recognized as essential, but while delivery workers were serving a necessary function, they didn’t always get the same recognition. As people lost their jobs when the economy slowed down, more people flooded onto the apps in search of the money they needed to keep a roof over their heads and food on the table. The dynamic that Smiley was writing about in 2015 was further cemented, and the on-demand services that enabled it were further entrenched in our lives.

In the first three months of 2021, Amazon’s sales had grown by 44 percent compared to the same period in 2020, as people turned to online shopping instead of going to local stores where they might risk catching COVID. But even as that threat dissipated, more people became accustomed to shopping online and will likely continue doing so in the future. The supply chain chaos driving inflation across our economy today is intimately linked to this process of reordering how goods and services are provided.

And it has only just begun. After years of testing cashierless shopping in Amazon Go and Fresh stores, the company has also begun rolling out its “Just Walk Out” system in some Whole Foods stores in the United States. The goal is to replace the human cashier or self-checkout with a surveillance system that tracks every item you pick up, then charges it to your Amazon account when you leave the store.

Once again, this can sound appealing and convenient, if you choose to ignore the array of cameras that track everything you do in the store and Amazon’s ability to keep track of your purchases. But it’s also exclusionary. To properly use the technology, you need a smartphone with an internet connection and an Amazon account with a linked payment method — typically a credit card. When Amazon opened one of its Fresh stores in Ealing, West London, in March 2021, the Independent observed an elderly man trying to go in, but after being told of the steps that were necessary, he replied, “Oh f*** that.”

The desire to eliminate human interaction — which is considered a form of unacceptable “friction” by tech companies — is at the core of many of these innovations, even as humans are still working behind the scenes to stock shelves, fulfill online orders, or deliver food. During the pandemic, many companies even introduced contactless delivery so customers could avoid interacting with the human worker at all.

Given how delivery apps are changing the economics of restaurants, there’s a growing push to create “dark kitchens” too: places to prepare food for delivery that offer no option for seating or even for customers to walk in and place an order. They’re purely designed to serve delivery apps and present the potential to ensure people spend less time eating out in favor of ordering in. It’s highly likely that this process will eventually lead many takeouts to abandon storefront locations, further transforming our high streets and our connection with the places that produce our food.

Who Gets to Shape the Future?

People on the political right often criticize public investment as wasteful and corrupt, but the reality is that the retreat of the state hasn’t resulted in some idyllic “free” market — it has just left wealthy, powerful, and ultimately unaccountable people in charge of shaping the economy.

The on-demand economy represents a concerted effort to remake important aspects of how we live so that they align with the ideas of the tech industry’s power players — regardless of whether they’re economically rational or socially just. Meanwhile, it has the happy coincidence of shifting ever greater amounts of control into their hands. (In the case of dark kitchens, it should come as no surprise that one of the leading people pushing that vision is none other than Uber cofounder and former CEO Travis Kalanick.)

In the years to come, we will have an important choice to make: Do we continue to allow powerful capitalists to shape our lives for their benefit, or do we take back the power to determine our collective future? The tech industry’s economic dream is building a nightmare for the rest of us: a society more firmly divided between the served and their servants, where the “friction” of human interaction is replaced with digital interfaces. It’s an antisocial future — but it’s one that we still have time to stop.