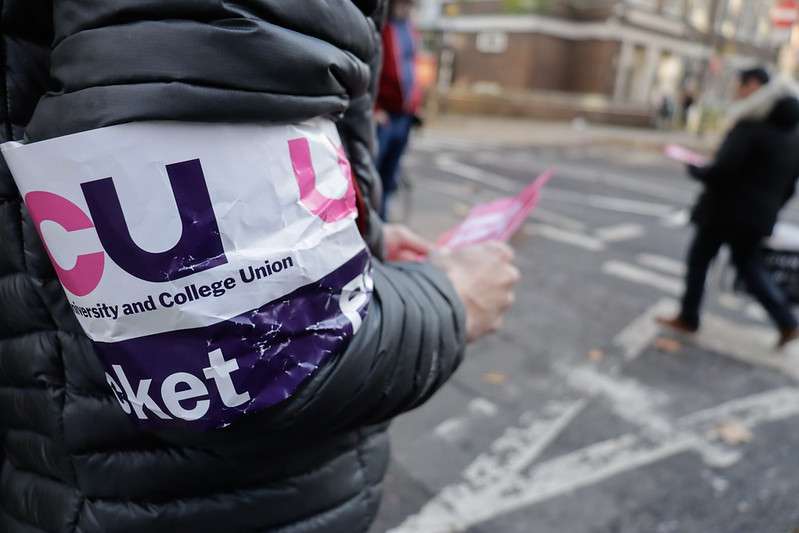 The UCU General Secretary has taken on her own members to argue for ten days of staggered action rather than an indefinite strike. rs21 members in UCU say that will get nowhere, and put the case for an indefinite strike as the most effective way to take on the employers.

In October, the Universities and Colleges Union (UCU) announced that its higher education section had voted overwhelmingly to back strike action over pay, conditions and pensions. Strike ballots were aggregated, meaning that every university UCU branch in the country was involved in the action. UCU General Secretary Jo Grady announced:

‘Today history has been made by our members in universities, who in huge numbers have delivered an unprecedented mandate for strike action… it’s 150 bosses against 70,000 university workers who are ready and willing to bring the entire sector to a standstill, if serious negotiations don’t start very soon.’

Such fighting words were suited to the mood among members, who have endured 13 years of real terms pay cuts. This year, we had a 3 percent pay increase imposed, despite RPI inflation hovering around the 14 percent mark. Members enrolled on the USS pension scheme received an eye-watering 35 percent cut to our retirement entitlements earlier this year. Workload, casualisation, and gendered and racialised pay disparities are also key aspects of our dispute with employers.

The UCU higher education committee (HEC) met on 4 November to decide next steps, and soon afterwards it was announced that three days of strike action would take place in late November, followed by a marking boycott and further strike action in the New Year.

Our strikes were solid, with huge numbers of members participating. Picket lines were buzzing with discussions of what comes next in our dispute. Thousands joined a rally and march through central London on the last of the three strike days.

And then… silence. For two weeks, members heard nothing about what was coming next. Frustrated HEC members lamented that they were held to confidentiality until notification was given to the employers, lest we risk the threat of legal injunction against the action.

Finally, on 13 December, a video was released on Twitter in which Grady announced that the HEC had voted for a marking boycott to begin in January and indefinite strike action from February. However, these actions had not been notified to the employer yet. Why, then, had HEC been sworn to secrecy?

The answer became obvious as Grady explained that she did not think that the decision for indefinite strike action represented the wishes of members, or discussions among members, and that an alternative strategy would be presented the following week. The strategy document, billed as ‘more professional’ than the one HEC had announced, turned out to be ten days of action, staggered throughout February and March, and a reballot of members to build towards further action in the summer term.

If there could be any doubt about the cynicism of this ploy, it was dispelled by the ostensible reason Grady gave for releasing this video. The NEC, she announced, had voted to prevent her giving in person reports, a lack of accountability that she said ‘doesn’t sit well with me’. In reality, the NEC had voted for her to pre-record reports so that there was more time in the meetings to ask questions about the report – that is, to increase the accountability she faced.

This was another example of the General Secretary, having lost an argument about the way forward, using the bureaucratic weight of the union to prevent action moving forward. Most recently, decisions taken in the summer for branches with a mandate to take part in a marking boycott were held up until many of those branches no longer had any marking to do. This followed the shock release of a report in Grady’s name saying we should not take any further action until next summer.

The Twitter intervention announcing the indefinite action meant that for many members, the first they were hearing of the decision was a critical response from the General Secretary. Many members seemed concerned that indefinite action would mean a forever strike, one with no pay for the foreseeable future.

The fact that HEC members didn’t break ranks and begin a discussion with members earlier was understandable but is not something that can be repeated. It is clear that the bureaucracy of the union is prepared to let inertia prevent effective action being discussed and built for. Our only antidote to this is to effectively engage as many members as possible in discussions about the way forward.

In an article by the co-chairs of Queen Mary UCU, a branch which went through a hard-hitting 14-week marking boycott this summer, the case for indefinite action is proposed as the most effective way of hitting our employers. Crucially, they point out that an indefinite action enhances our structural power as HE educators and professional services staff. It overcomes the unevenness of working conditions by shutting down the functioning of the university until we decide to go back. This pushes the frontier of control in the direction of members and away from management who are unable to instruct us to make up education missed on strike days. By concentrating our action, we increase its potency and the likelihood of getting a greater concession from employers.

The final decision on next steps will be taken in the New Year, by a new branch delegates meeting (BDM) and a subsequent meeting of the HEC. We need to engage as many members as possible in the short time before that in a discussion about the way forward. The General Secretary’s strategy, based on a handful of strike days that will get us nowhere, jeopardises the chances of winning any reballot. We need to win an argument that hard-hitting action can force our employers back to the table.

Members attending the BDM should also have a sense of all the relevant agenda items up for discussion at HEC, so they can meaningfully provide the ‘strong steer’ that BDMs are supposed to give HEC. Restricting discussion solely to the questions that have been circulated will only exacerbate the existing disconnect and undermine our ability to act.

We shouldn’t shy away from the bigger political argument, though. Indefinite action is not just an option for the HE sector – it could be a crucial factor in spurring other national disputes to escalate towards the kinds of disruption that can win. Posties, rail workers, nurses, ambulance drivers, and every other group of workers on the battlefield might see our action and ask their leadership: if it’s good enough for them, why not us? In the midst of a cost-of-living crisis presided over by an unpopular, unelected austerity government, such action is precisely what is needed. That dynamic – a class dynamic – could be one that overwhelms the employers and the government.