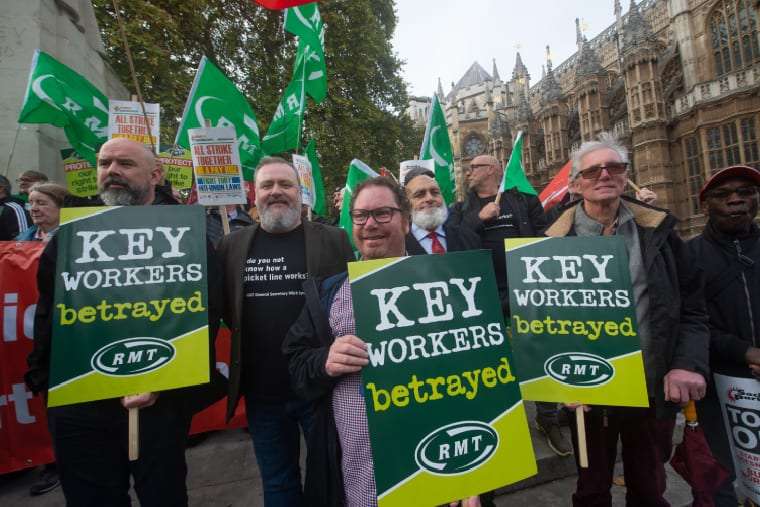 The Tories are poised to announce a raft of new pro-boss, anti-union laws. The Times newspaper says bosses will have new powers to sue unions and sack workers.

They will force union members to continue working during strikes to retain a “minimum level” of service. That’s the abolition of any right to strike. It’s a crude weapon to smash resistance with the threat of massive fines and dismissals.

In Italy rail unions are expected to provide a minimum guaranteed level of service from 6am to 9am and 6pm to 9pm. The country’s law 83/2000 says that in “indispensable services” workers must maintain “at least 50 percent of the services normally provided”.

A government source told The Times, “Strikes would be deemed illegal if unions refused to provide the minimum level.” Companies would be able to sue unions. And union members who were told to work under the minimum service requirement, but refused to do so, could be sacked.

It’s unclear if ministers will try to increase still further the strike ballot thresholds unions have to pass. Other measures under discussion include doubling the minimum notice period for industrial action from 14 days and reducing the six-month limit for strikes before a re-ballot is required.

The measures are so harsh that the Labour Party has rejected them. Until this week Labour would not commit to dumping such laws if it was in government. But on Thursday, delivering his first big speech of the year, Keir Starmer went beyond saying he would oppose the new moves.

He said, “If it’s further restrictions, then we will repeal it.” But that won’t help the battles now and coming soon. And there’s no guarantee Starmer will make it to Number 10, or will stick to this pledge.

Unions have to stop these laws before they are imposed. There is no shortage of defiant words from the top of the movement.

RMT union general secretary Mick Lynch told Tribune magazine, “It looks like conscription, really. It means that striking will probably become ineffective in many cases, and that the worker as an individual has no right to strike. If they don’t cross pickets, they could be sacked. And it would be a lawful dismissal automatically.”

Paul Nowak, the new general secretary of the TUC, tweeted that the union federation will “resist them all the way”. But he added that the fightback would be “in Parliament. In the courts”.

He then added in a vague way, “I have no doubt our unions and members will continue to win ballots and exercise what is an internationally recognised, fundamental right.”

Lynch says at one point to Tribune, “Ultimately it’s going to have to be resisted on the streets, possibly through industrial action”. But he goes on to say the campaign “needs to get the mainstream of the Labour Party onboard. They need to be saying, ‘I identify with this.’.”

“It needs the churches, the mosques, the gurdwaras, it needs all the religious groups,” he said. “It needs civil society and all the other campaigning groups, from environmentalists to human rights organisations. It needs to be able to make this an issue for more than committed trade unionists.”

What sort of campaign is going to be acceptable to Starmer and his acolytes? It certainly won’t be a militant refusal to accept the laws and to strike in defiance of them and against them.

We have heard words about opposing anti-union laws from the union leaders before. But there was never the necessary action and the unions have meekly followed every obstacle thrown up by the restrictions.

This time it has to be different. Sunak is hoping to rally his backbenchers and secure victory by breaking strikes. But if he is defeated it could stop him almost before he has begun in Number 10. The new laws are another reason to widen, escalate and unite strikes.