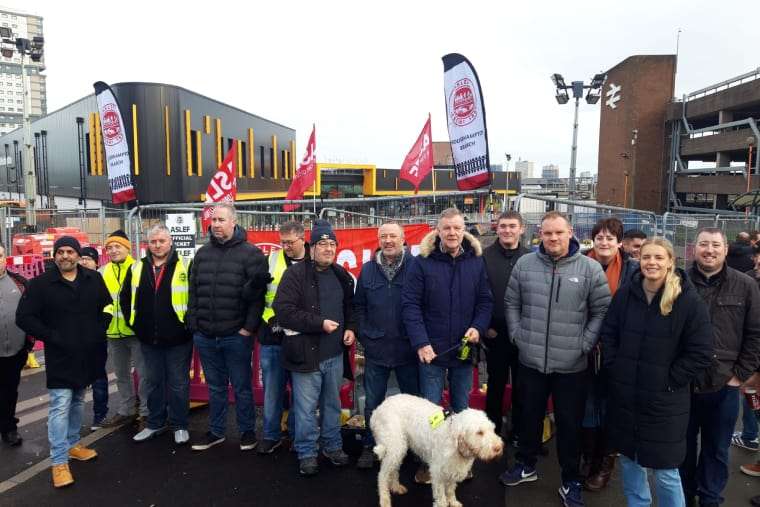 Workers want to hound the bosses with more strikes

Most trains were cancelled on Thursday as 12,500 drivers at 15 train operating companies struck over pay.

The Aslef union members’ walkout saw solidarity—and discussions about the need for escalation—on the picket lines. It came in between two 48-hour strikes by 40,000 RMT union members at Network Rail and 14 train operating companies.

In Hull, RMT and NEU union members brought solidarity—and Aslef members plan to support the ambulance workers’ picket line next Wednesday. The picket line was big and saw discussions about the way forward.

In Nottingham, Aslef strikers had solidarity from trade unionists from the RMT, FBU and Unite Community.

Aslef general secretary Mick Whelan told the BBC that members had told him the union’s strategy was “not going hard and fast enough”. He added, “It may be that we have to take greater action going forward, to make people listen. There is a vast will among our membership to continue. We’re in this for the long haul.”

In London, one South Eastern train driver told Socialist Worker that it’s time for “more strikes”. “We need more of a strategy,” he said.

Another Aslef rep in London told Socialist Worker, “We need to be more proactive and aggressive.” The rep said he would like to see Aslef build their way to the “same level of strikes as RMT members”.

It’s good that the RMT leadership escalated this time round—but it has to do so again. Six months of the rail disputes have shown the RMT’s strategy of episodic blocs of action isn’t enough to win.

There is a potential to unite three struggles on the railways. It would be powerful for the 40,000 RMT members at Network Rail and the 14 companies, the 1,000 outsourced train cleaners and the 12,500 Aslef train drivers to walk out together.

Union leaders should coordinate where possible, but not delay escalating now. The Tories and bosses are pushing through an all-out assault on rail workers’ pay, jobs, terms and conditions—and the right to strike. They hope to ride out the rail strikes, wearing down workers’ morale. An all-out strike, with mass pickets and solidarity, has the power to shift the situation decisively.