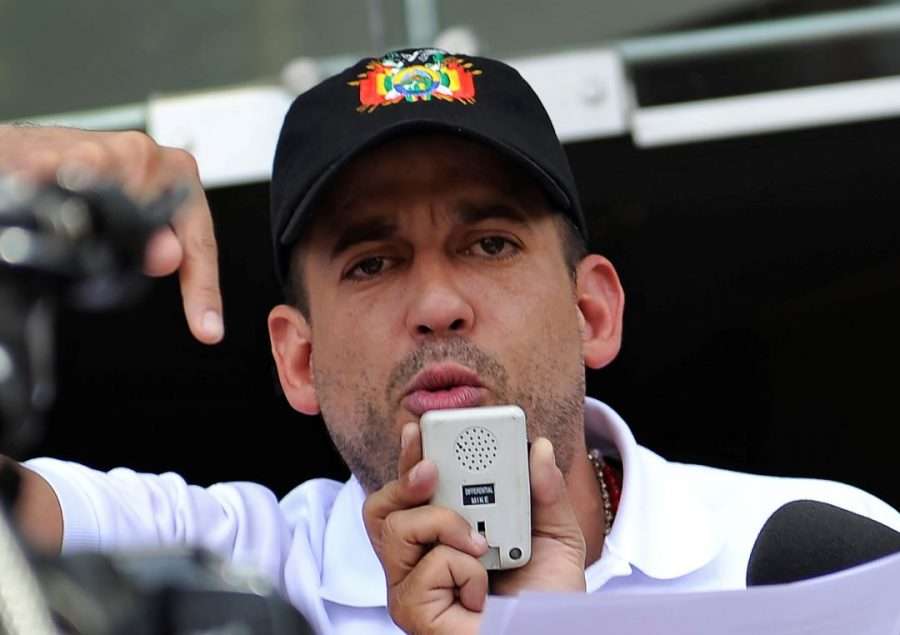 Bolivia’s socialist-led government has arrested far-right leader Luis Fernando Camacho, a mastermind of the 2019 coup that deposed Evo Morales. It’s an important step to restore Bolivian democracy and to bring to justice those who carried out the vicious coup.

At least four times, Luis Fernando Camacho resisted court summons for his masterminding of the 2019 coup in Bolivia that deposed leftist president Evo Morales. Camacho is governor of Santa Cruz, a corporate lawyer, and a very wealthy businessman. More important, he is a far-right ideologue from a traditional fascist family intent on breaking the power of socialist presidents.

On Wednesday, December 28, he was arrested for obstructing justice and helicoptered out of his right-wing stronghold in Santa Cruz. His followers in that city set the four-story building of the public prosecutor on fire and trashed the National Tax Institute, among other government properties. They destroyed the home of a high-level socialist politician. Paramilitaries tried but failed to take over the central police installations in the city of two million.

In addition, about one hundred Camacho loyalists shut down two airports by placing their bodies in front of the wheels of airplanes. They cleared planes of passengers in their search for Camacho and emptied the airport of its workers, including security personnel, who were assaulted and retreated to de-escalate the situation.

Camacho’s supporters in those attacks were led by the highest-ranking members of his political party, Creemos, which is located on the rightmost edge of the country’s political spectrum. Creemos is calling for violence nationally and has shut down Santa Cruz once again. Far-right politicians outside Bolivia have leapt into the fray, and Creemos is seeking support from the US State Department.

One week after Camacho’s arrest, chaos continues in the city of Santa Cruz, mostly in the neighborhoods of the well-to-do. Creemos paramilitaries are targeting the central police command. Some twenty-seven offices of the state and properties of the Movement Toward Socialism (MAS) leaders have been sacked or burned. This week, the infamous paramilitary group that Camacho once directed — the Union of Santa Cruz Youth, or UJC in the Spanish acronym — tortured a public employee and a lawyer whose politics offended them. They used the methods of “hired assassins,” in the words of presidential spokesperson Jorge Richter.

Yet Camacho’s power is diminishing. Despite being on the Right, Santa Cruz’s mayor, Jhonny Fernández, is no friend of Camacho and declined to join Camacho’s latest coup attempt, which paralyzed the city for thirty-six days in November. Veteran right-wing leaders have been jockeying for power in recent days and distancing themselves from Camacho’s strategy of mayhem. The heads of the city’s largest chambers of businesspeople have denounced Camacho’s blockades.

And the strength of the Left is growing even in Santa Cruz. In the last local elections, the socialist party that holds power nationally — MAS, or the Movement Toward Socialism, headed by former president Evo Morales — received its largest share of the vote to date, around one-third of the city’s electorate. In crass recognition of that fact, Camacho’s partisans threatened to “bring suffering” to the mothers of MAS militants in the city. They also publicized the home address of President Luis Arce’s daughter in Santa Cruz, not an idle threat given that the minister of public works, Edgar Montaño, just suffered the destruction of his home in that city.

The real possibility of trials for sedition, massacres, and torture is opening a new era in Bolivia. In June 2022, the coup president, Jeanine Áñez, was sentenced alongside eight military and police commanders, on charges of usurping the office of the presidency. Another two pleaded guilty and received shortened sentences. Two of the most important top brass were sentenced in absentia: Williams Kaliman, the former commander of the Armed Forces, and Yuri Calderón, the head of the police during the coup, both of whom went into hiding (most likely in the United States, one of the first nations to recognize the coup regime).

Áñez was a small player compared to Camacho, who sowed decades of violence against the MAS and its indigenous base. Former presidents and the high command of the security forces instructed Áñez in ordering the massacres of Ovejuyo-Pedregal, Sacaba, and Senkata. Camacho picked Áñez’s minister of defense, Luis Fernando López, who carried out the massacres.

The list of those facing charges for the coup and the regime it brought to power includes hundreds of police and soldiers who treated civilians savagely. Paramilitaries formed shock troops of many hundreds, and while some of their leaders have been charged or even sentenced, their close association with economic elites has allowed many to elude sentencing.

The human rights trials are just beginning in Plurinational Bolivia and offer a tremendous challenge to incessant US coup-making across the hemisphere. They represent a collective ethic and commitment to dignity rising out of the wreckage of a country devastated by racism and class hatred against the poor. The strength of Bolivia’s socialist project and its democracy hinges on the nation’s ability to bring to justice those who led the coup and committed its crimes.