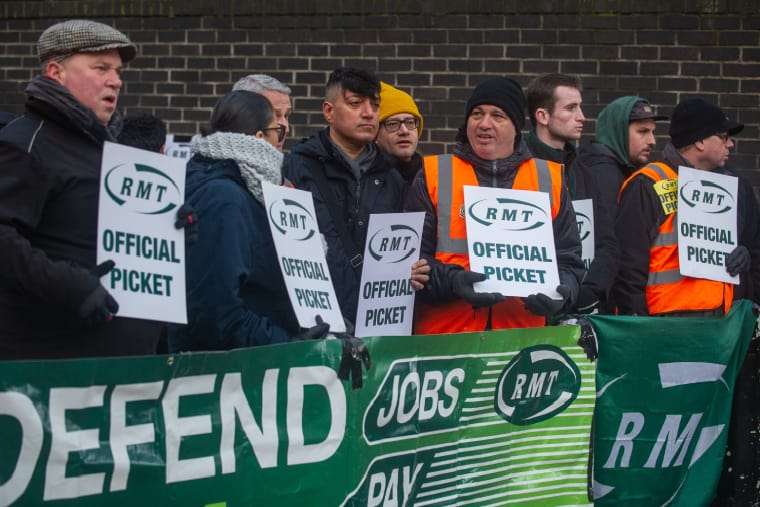 Rail workers remain determined to win after a week of strikes showed the power of longer, harder-hitting action to bring the network grinding to a halt.

Some 40,000 RMT union members at Network Rail and 14 train operating companies launched their second 48-hour on Friday. They’d struck for two days from Tuesday—and 12,500 Aslef union train drivers at 15 companies walked out in between the RMT strikes on Thursday.

Dan, a Network Rail worker in the West Midlands, told Socialist Worker, “Not one person has crossed the picket line here. People are ignoring the bullshit from the media. Many are seeing the similarities with their own workplaces and how they’ll be affected as passengers if rail bosses get their way.”

The picket line outside Tunbridge Wells station in Kent swelled to 35 people, including support from the FBU and Unite Community unions. RMT members had arrived from Hastings on the south coast, nearby Tonbridge and elsewhere to bolster support for the strike.

Almost 30 people joined the picket line outside Weymouth station, with Dorset trades council bringing its banner in solidarity. In Derby pickets assembled outside the train station and the East Midlands Trains bosses’ headquarters. And outside Paddington and Euston stations in central London, pickets received solidarity from members of the French union federation CGT.

Rail strikers raged at Tory plans to ram through a brutal assault on the right to strike. Rishi Sunak and business secretary Grant Shapps announced plans for “minimum service levels” during industrial action the day before.

Clayton, RMT Manchester South branch secretary, told Socialist Worker, “If the government is going to tighten laws, there’s going to be no option but to break the laws.

“We can’t idly stand by and let the laws get more and more restrictive as time goes on. Workers are just going to have to stand up and take action—with or without the leadership of the trade union movement telling them to.”

She added, “We’ve got to make the most of our five month strike mandate. Currently the government and companies still don’t wish to negotiate with us—but we’ve got to fight.”

The RMT and Aslef picket lines have seen some discussions about the way forward. Six months since the first RMT strikes, the leaderships’ strategy of episodic walkouts hasn’t shifted the Tories and bosses.

But so far it hasn’t called any more dates, and another pause in action would help the Tories and bosses.

Dan argued that “we should look towards a united day of strikes” in early February because “a day that all the unions can rally around would be really good”. But, he added, “Hopefully we can have more strikes before then.”

On the Coventry picket lines one of the local reps said the TUC union federation should be coordinating strikes against the Tories.

Union leaders are discussing the possibility of a united day of action on 1 February, which could see one million workers come out on strike together. Such a day could become a focus for the whole working class.

Yet rail unions have to ramp up the strikes now—coordinating where possible, but not waiting on a united day. To win requires a decisive shift in the tempo of the dispute through serious escalation. Mass pickets, and participation of strikers in the running of the strike, would massively strengthen the fight.

The Tories and bosses hope to wear down workers’ resolve, forcing them to accept below inflation pay cuts and attacks on jobs and terms and conditions. That’s a real danger if the dispute drags on with on-and-off action that doesn’t shift the situation.

All-out action would be the best response to the all-out assault. This could bring the network to a halt, hamper the flow of profits in other sectors, and quickly derail the Tories’ and bosses’ plans.