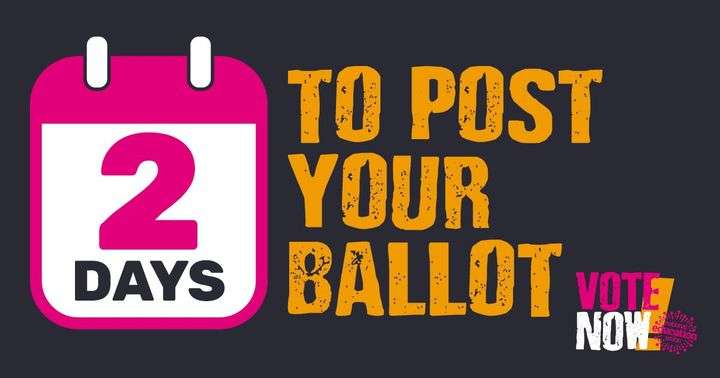 As the NEU ballot draws to a close, teacher and NEU member Andy Cunningham calls on those who have not voted to do so now, and discusses the next steps for the strikes.

At the opening of 2023, a rising wave of strike action has opened up the possibility of our side, the working class, winning a huge victory over the government: at stake is the future of our public services, from schools to trains and everything in between. Over the last twelve years especially, but really since 1979, we have faced attack after attack on the post-war institutions set up to make life that little bit better. Hospitals, schools, social care, utilities and transport have all been cut to the bone or privatised. Billions of pounds have disappeared from our collective control and transferred into the hands of rich individuals. This strike wave, and the ballot in schools, takes place in this context. It is about reversing years of attacks on our education system and putting a crucial public service back at the centre of everyday life.

First week back: get those ballots in

In the first week back at school, the task for union members is getting to the end of the ballot finishing line and ensuring we meet the 50% turnout threshold. This has been difficult for the union to achieve because of the fragmented nature of school organisation. But we are nearly there, and with one final push over the next two days we can achieve what since 1945 we have been unable to achieve – a majority of a ballot group voting for strike action on a more than 50% turnout.

Organising now for picket lines and to close your school

But the good news is that the hard work doesn’t stop there. 13 January marks the end of the ballot in schools, but, even before then, we need to start shifting our attention to organising around the actual strike days. The ballot alone isn’t going to win more school funding from this government – what will win it is the maximum number of schools closed and the maximum number of workers striking together.

Now is the time, in your school, to get your colleagues signed up for picket line duty. This is important for a number of reasons. Firstly, it makes the strike concrete for people. The aim is to shut the school and send the strongest possible message to the government. Secondly, it is fair to give colleagues who may be wavering, or even planning to work that day, the heads up that they will have to face those of us who care about the future of education at the school gate. Thirdly, for those that do strike, active involvement on the day is incredibly important. This will not only send the strongest message possible to the government, it will also make it easier to build union organisation in the future. These debates need to happen in the first three weeks so that we are ready for the strike day at the end of January.

An important additional task is to start linking up with other unions in your town, village or district. We will likely be out on strike with nurses, the ambulance service, the post, railway workers and civil servants, with more joining the movement all the time. Co-ordinate local events and local rallies – build the links across communities that can help win.

Political leadership in every school

Building union power in schools is one of the key objectives of this current moment. It is clear that education is not a public service that can be left in the hands of this government. Like many of you, I am both upset and furious about the state of our schools and public services. Despite the Herculean efforts of everyone in schools, we continue to have to do more with much, much less, just so that young people can receive the basic care they need. This is our chance to change that and push for a system that can really deliver meaningful support and development for every child.

These are the arguments we need to have with people. Yes, pay is important, but we’re in this for much more. Having these discussions in schools with colleagues is crucial to delivering a good strike day. It is political leadership, where reps and workplace leaders don’t just restrict themselves to the narrow dispute, but understand that our strike is part of something much bigger: an attempt to deliver a new settlement for ourselves and future generations – a settlement that puts well funded public services at the heart of our communities; a settlement takes reality seriously and deals with issues like the climate crisis and the mental health crisis; a settlement that delivers for the children in our care.

We can deliver this, but we have to organise in every school and on every picket line to defeat the government.