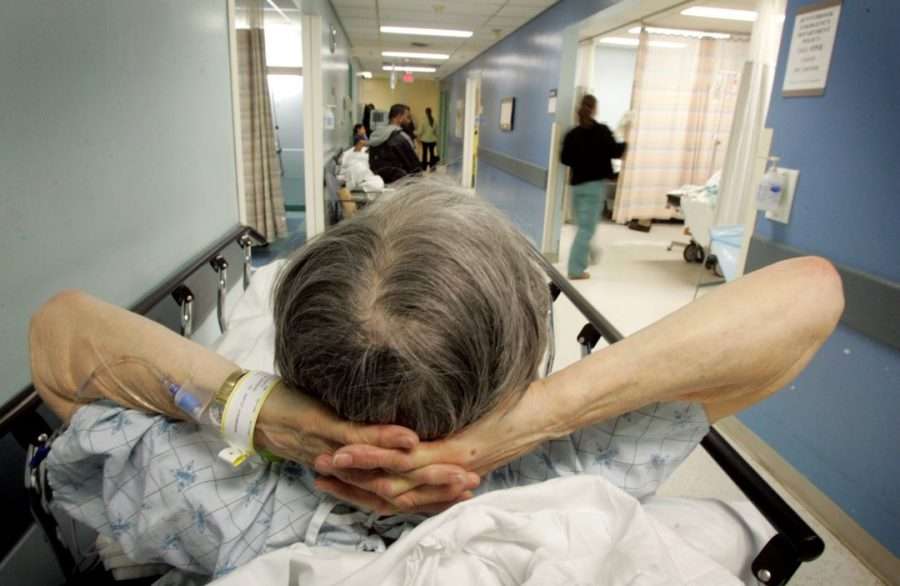 After decades of cuts, Canada’s public healthcare system is in crisis. The results of austerity are not theoretical — people are dying in Canada’s waiting rooms.

An elderly patient bides her time while waiting on a stretcher in what is known as “The Hallway” inside of the Sunnybrook Hospital Emergency Room in Toronto, Canada, in January 2005. (Peter Power / Toronto Star via Getty Images)

Canada’s hospitals are in crisis. Across the country, its emergency departments (EDs) are overwhelmed, their beds are full, and patients are dying. This past fall, an Angus Reid poll found that 29 percent of adults reported “chronic difficulty” accessing health care. In Ontario, Canada’s largest province, a recent Environics poll shows that 80 percent of respondents believe the province’s health care system is in crisis.

Throughout the country’s health care system, influxes of COVID-19, respiratory syncytial virus (RSV), and influenza patients are overwhelming short-staffed facilities, including children’s hospitals. While much of the news coverage has suggested that the system’s inability to cope is a problem of too many patients in the wake of COVID backlogs, it is actually a recurring problem. A review of the last few decades shows that the country’s emergency departments experience this problem — too many patients and too few beds — nearly every five years.

Hospitals Canada-wide have had to airlift patients, close emergency departments, extend family medical clinic hours, and subject patients to lengthy and dangerous wait times. In Quebec, the province’s average ED wait time, according to reports available from the Canadian Institute for Health Information (CIHI), stands at 4.9 hours. In Montreal, a mother made headlines for waiting ninety minutes for her infant son to be treated as he fell into respiratory distress. Emergency departments are so overwhelmed that the provincial government set up a new app, Guichet d’accès à la première ligne, to direct people to family doctors to relieve pressure on urgent care. The app was quickly overwhelmed with tens of thousands of calls.

In Ontario, after years of bed closures, average ED wait times, according to CIHI, stand at 3.3 hours. But some hospitals have extended their wait times to up to forty hours. Ambulance off-load times have increased as well — rising, in some cases, up to 151 minutes.

Manitoba, according to CIHI, has the longest average wait times in Canada at five hours. In Winnipeg’s Concordia Hospital, a couple waited six hours in an ambulance bay, where they dealt with cold temperatures and ambulance exhaust, to be treated for pneumonia. In Saskatchewan, last month, the Paramedic Services Chiefs of Saskatchewan told CTV News, “People have crashed in the back hallway, and we have had to wait 45 minutes, hours to get that bed. We’ve had people go into cardiac arrest.”

In Alberta, during the worst of the fall flu season, average wait times, according to CIHI, stood at 3.1 hours but were as long as seventeen hours in children’s hospitals. “We have had deaths from people who sat in the waiting room and have passed away in the waiting room,” Dr Warren Thirsk told CTV News Edmonton. “We are seeing untold hours of suffering just from pain not being controlled, from the anxiety of knowing something’s wrong with you and not being looked after.”

In New Brunswick, according to CBC News, patients like eighty-eight-year old Karen Totten were pushed to wait for out-of-hospital care in a supply closet. “When you’re deaf and you’re blind and you can’t walk, you need better care than that,” her daughter said.

The original purpose of emergency departments was, as the Canadian Association of Emergency Physicians (CAEP) notes, to evaluate and manage patients over a two-to-three-hour period. But, as the CAEP observed further, ED crowding and lack of access “is not a new problem.”

Indeed, over the past four decades, the problem has reappeared with news headlines like “Emergency Ward on Lawn Approved” in 1987, “ER Crowding Getting Worse” in 1999, and “ER Overcrowding Delays” in 2004.

Since the introduction of Canada-wide Medicare, frivolous or “common complaints,” “Elderly patients with nowhere else to go,” drunk driving, eggnog-induced “common sense” deficits, bad parenting, the opioid crisis, influenza, H1N1, SARS, and more have been blamed for ED “overcrowding.”

Over this period, media outlets, government officials, and think tanks have suggested a wide range of “remedies” to cut wait times. All of these suggestions, however, are austerity-inflected solutions of the less-is-more variety.

In 1977, a report to the Hospital Association of Metro Toronto suggested closing emergency departments at night and during “off-peak” hours to salvage beds during peak hours. In 1989, Ontario’s Emergency Health Program suggested hospitals across Ottawa introduce new “bed management” policies to “get beds freed up more quickly.” In the 1990s, Quebec’s “Tactical Intervention Group” was empowered to act as a sort of “emergency room police” to sanction hospitals that allowed patients to occupy beds for more than forty-eight hours.

More recently, the Ontario Liberals, while bragging about having the “lowest” program spending per capita of any Canadian province, introduced a pay-for-results program, tying ED funding to wait-time reductions. Ontario has also joined other provinces to help “coach” hospitals to adopt “Lean” management protocols, to speed up health facilities in the same way Toyota speeds up factory floors. This means tracking nurses with stopwatches, endless searches for “savings” in imaging and tests, “standardized” staffing, and the like.

In the past year, as COVID-19 cases have dropped, the call to resolve the crisis in the health system has prompted a new round of calls for privatizing and outsourcing procedures. But every decade, Canada’s health care system is forced to revise its operational standards because the number of sick and injured people outpaces its resources. “Overcrowded hospitals” is a canard.

As CAEP observed in 2002: “ED overcrowding is primarily the result of a shortage of inpatient beds. . . . When a hospital has enough inpatient capacity to promptly meet the needs of seriously ill or injured patients, ED overcrowding does not occur.” The current crisis, purportedly the result of RSV and COVID-19 cases, moreover, is not a crisis of “elective procedures” or out-of-hospital care. These are acute and critical care patients — the primary responsibility and largest line item in the Canadian health budget.

As the Toronto Star notes, the current crisis closely maps on to cuts to health resources. Canada had 1,233 hospitals in 1952, five years before the Hospital Insurance and Diagnostic Services Act, with 146,032 beds.

The 1966 Medicare Act saw Canada’s health capacity expand rapidly, especially in the area of hospital and hospital bed construction, on a 50/50 cost-sharing basis between the federal and provincial governments. However, by 1970, the federal Liberals were looking to make budget cuts. The government’s 1970 Economic Council suggested measures to “discourage the use of medical services” even if it meant “deterrent fees.” In 1977, the 50/50-cost-sharing program came to a quiet end and transfers eroded over the decades that followed. This accelerated in the 1990s, as the Liberal party implemented one of the harshest austerity programs in the industrialized world — cutting transfer payments to the provinces by nearly 50 percent.

The current shortage comes amid negotiations for a forthcoming health accord between the federal government and the provinces. As the federal government has a larger tax base, the same premiers who are eagerly cutting and privatizing the health system are now pushing for more funding. This does not mean, however, that priorities are going to change. As Prime Minister Justin Trudeau told CBC News, “There’s no point putting more money in a broken system.”

While Canada’s universal health care system has been touted as Canada’s most “cherished institution” and a national treasure, Canada’s business owners and their politicians have always been eager to limit, cut, and undermine it. The Trudeau Liberals and Canada’s various right-wing premiers are just the latest iterations. This is, after all, the playbook of all privatization advocates everywhere: starve a public good, wait for it to malfunction, and then claim the free market is required to fix the problem.

While much about health care is complicated, the current crisis is not. After decades of cuts, Canada’s public health care resources are insufficient to meet the needs of ordinary people. While the crises and ailments that lead people into EDs may be complicated and multifaceted, these departments are strained because they are underfunded and under-resourced. Stopping the erosion of the health system and solving the crisis in the country’s hospitals will require resources for health care workers, services, and patients.