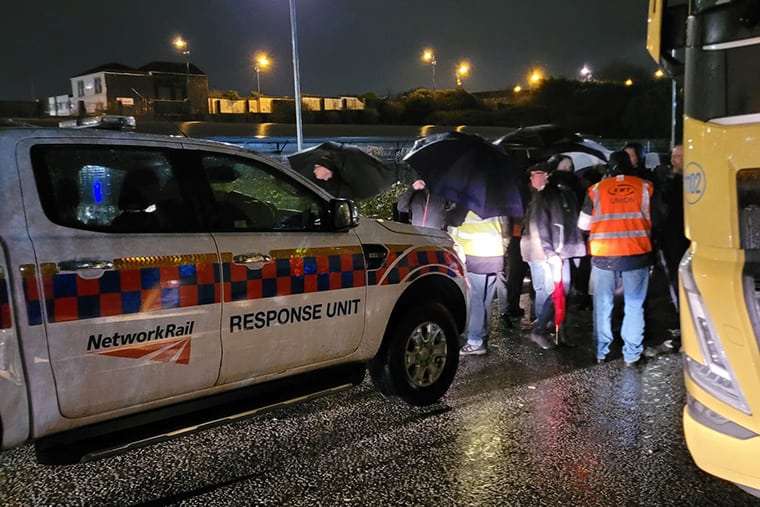 Solid picketing by around 150 RMT union members and supporters held back scabs early on Saturday morning at the Sandhills Regional Operating Centre in Liverpool. This is the signalling and electrical control centre for the whole of the Merseyrail Network.

It came on the second day of a 48-hour strike by 40,000 workers at Network Rail and 14 train operating companies.

The scabs were all management grades. None were RMT members. The picket began at 5.30am, ahead of the management scabs arriving in their cars.

After three hours, they were forced to abandon their vehicles, and to be escorted into the workplace by the police. The disruption meant that Merseyrail bosses were forced to cancel all services across the entire network.

At 7.50am, the employer was forced to put out a pathetic tweet. It said, ”Due to activity relating to today’s planned industrial action, we are unable to run the planned timetable. We are working to reinstate train services and will share more information as soon as it is available.”

The action, supported by trade unionists from unions outside the RMT, has provided an example of how effective picketing can be. And it’s boosted the confidence of activists across the movement on Merseyside.

Rishi Sunak is trying to encourage trade union leaders to block strikes by offering—highly limited— talks on Monday. The manoeuvre shows the government is under pressure and wants a way out.

But ministers don’t want to make the slightest real concession. For example, they are reportedly ready to “discuss” dropping a demand for train drivers rather than guards to operate carriage doors. But they are not ready to withdraw all the other attacks. These include closing ticket offices, mass redundancies, changes to work conditions and a pay settlement that is in reality a big pay cut.

That means not a penny more on the present rotten deals. Several unions are rightly suspicious of the move. The Unison union health Twitter said, “The PM’s latest comments about ministers meeting health unions for talks are no more than window-dressing.”

Matt Wrack, general secretary of the FBU fire fighters’ union, called it an “empty offer” and a “meaningless stunt”.

The GMB union said it would suspend industrial action only if a new offer was made to resolve the dispute over this year’s pay settlement.

Emma Runswick, deputy chair of the BMA doctors’ organisation, said the government’s offer of talks was “laughable” because the pay review body process was “not fit for purpose”. Talks that exclude this year’s pay round are a trap. Union leaders shouldn’t be going to them.