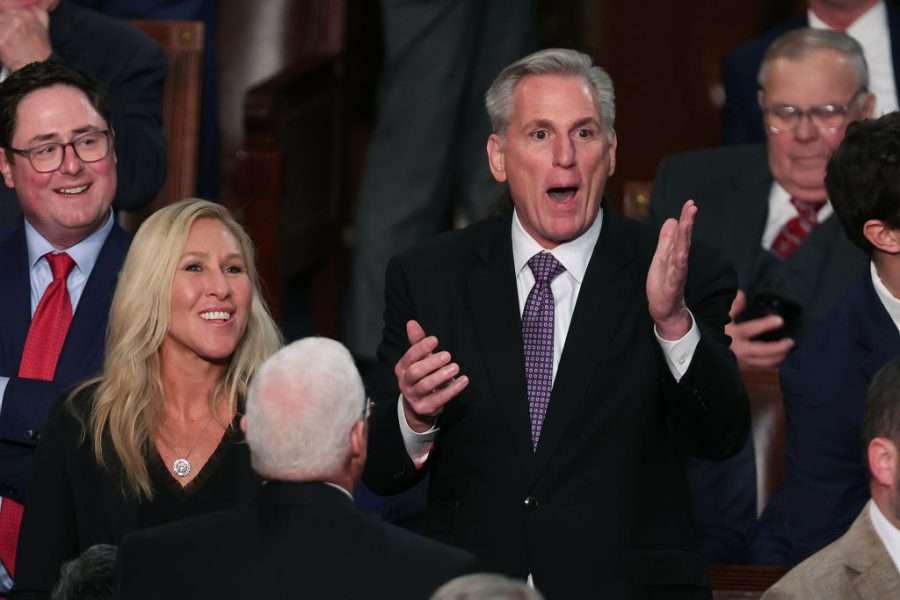 By fighting Kevin McCarthy’s bid to become the next Speaker of the House, the right wing of the Republican Party won significant concessions that will make it a powerful player in Congress. The Left should learn to replicate its tactics for egalitarian ends.

Alongside Georgia representative Marjorie Taylor Greene, House Republican leader Kevin McCarthy reacts during a vote to adjourn following a day of votes for the new Speaker of the House at the US Capitol on January 4, 2023 in Washington, DC. (Win McNamee / Getty Images)

“There is no reason why good cannot triumph as often as evil,” Kurt Vonnegut wrote in The Sirens of Titan. “The triumph of anything is a matter of organization. If there are such things as angels, I hope that they are organized along the lines of the Mafia.”

Something similar can be said about the American left. Democratic socialists fight for universal health care, an end to the climate catastrophe and mass incarceration, and economic democracy. But if we’re going to triumph over the forces of reaction and win these changes and more, we’re going to need to learn to fight harder and smarter. Today that means taking a page from the American political equivalent of the Mafia: the right wing of the Republican Party.

In the last week, the Republican right fought Kevin McCarthy’s bid to become Speaker of the House and showed everyone how to play political hardball to build power. The Left, with growing socialist caucuses at the state level and a growing bench of progressive representatives in DC, needs to learn some lessons.

What the Right Won

Kevin McCarthy has been at the head of the Republican’s House caucus since 2019. In any other ordinary year, the position of Speaker of the House would have been his almost automatically following the Republicans’ narrow victory in last year’s midterm election. But a small group on the party’s right wing turned a coronation into a multi-round fight.

Twenty congressmembers were at the core of the right-wing rebellion; all but one are connected to the House Freedom Caucus, the ideological home of the party’s rightmost flank. These Republicans are notorious for their support of Donald Trump and the January 6 riots. They deserve every decent person’s scorn. But when it comes to tactics, one has to admit that they know how to play.

Desperate for their support, McCarthy had to give on issue after issue. McCarthy folded early on policy questions. He fought against the 2022 lame-duck spending bill, a core right-wing priority. He called for the resignation or impeachment of Homeland Security Secretary Alejandro Mayorkas, a target of the Right’s ire. McCarthy also agreed to create a new subcommittee in the House Judiciary Committee to investigate the “weaponization” of the federal government by the Biden administration and the FBI and CIA.

More significant in the long term, he also agreed to rules changes and committee assignments that will dramatically strengthen the Right’s hand.

McCarthy agreed to add three members from the Freedom Caucus to the House Rules Committee. That will allow the far right to help shape the issues to be considered by the House. McCarthy’s own PAC, the Congressional Leadership Fund, agreed not to intervene in open primaries against far-right candidates. McCarthy agreed to bring back the Holman Rule, which allows legislators to propose defunding specific federal programs, to fire specific federal officials, and to slash officials’ pay.

Most significantly, he agreed to bring back the “motion to vacate the chair,” which will allow just one Republican to call for a snap vote to remove the speaker. This is a rule that the right wing previously used to remove John Boehner. Georgia representative Marjorie Taylor Greene, a leading conspiracy theorist from the Republican fringe, extracted a much sought-after seat on the House Oversight Committee from McCarthy in return for her support.

There will now be an investigation of the House Select Committee on the January 6 riots, another right-wing priority. And McCarthy agreed to hobble the work of the Office of Congressional Ethics and to make it harder for the office to hire investigators, a move the Right hopes will gum up further investigations into what happened on January 6.

Most of these concessions granted to the Right are detestable. A few — like new investigations into the operations of the FBI and CIA, or restraining the ability of the party leadership to campaign in primaries — might be appealing to the Left. But either way, the fact that the Right was able to stack up so many wins reflects its cunning use of hardball tactics to advance its agenda.

How to Build Power as a Minority

Every one of the concessions granted to the Right bolsters the morale of its base and will strengthen its hand in Congress in the months to come. The Freedom Caucus racked up significant policy wins, and its leading cadres will now have coveted committee assignments to use as bully pulpits from which to propagandize.

The Right is also well-positioned to extract further concessions from McCarthy in the next two years. The fact that only one Republican can now call a snap vote to remove the speaker, which at a minimum will embarrass McCarthy and weaken his position inside the party, and — as happened to John Boehner — could succeed in removing him, will mean that McCarthy will constantly have to attend to the demands of the party’s right wing.

A new committee to investigate the Biden administration and the intelligence agencies fulfills another right-wing objective: severely constricting the room for maneuver of Biden and his team, as well as federal authorities investigating the far right. The Holman Rule, which will allow right-wingers to target federal officials, will empower the former to put pressure on the federal bureaucracy to more closely follow the priorities of the Republicans’ House caucus.

Democratic leaders were quick to note how effective the Right’s tactics have been. Massachusetts representative Richard Neal, the party’s leader on the Ways and Means Committee, put it bluntly: “The concessions [McCarthy has] made means that it will be a minority of a minority of the minority, because of the Freedom Caucus, that will get to dictate the outcomes of legislative achievement.”

As the minority in Democratic caucuses in DC and in state legislatures like New York, the Left needs to think creatively about how to best strengthen our position. The Right showed the way here. Not in the demands it made — most of those are specific to its own agenda of taking an ax to the federal government — but in how it made them.

To achieve very different ends, we should be prepared to go to war against Chuck Schumer, Hakeem Jeffries, and others who otherwise have no sympathy for or interest in advancing our agenda. And we need to win powerful bully pulpits from which to propagandize for democratic socialist politics. To date, centrist Democrats have worked hard to keep the Left off of important committees. For example, Democratic leaders denied key committee assignments to progressive left congressmembers like Alexandria Ocasio-Cortez and Rashida Tlaib in 2019 and again going into 2021. By playing hardball, we could change that.

Breaking Up the Party System

The Right’s attack on the Republican leadership this week may just be the opening round in an ongoing war. According to leading right-wing activist and intellectual Ed Corrigan, the Right has plans to transform the House into a “European-style coalition government” with three factions: “the Democrats, the Republicans, and the Freedom Caucus.” The speaker fight, and the concessions won from McCarthy to strengthen the Freedom Caucus in this new session of Congress, are part of a longer-term strategy to realize this vision.

The Left cannot sit back and let the far right limit the political battlefield to these three camps. We are not on the same side as the leaders of our nominal party, and we have every reason to fight them just as hard as the Right does against their leadership. We ought to sit very uncomfortably inside the Democratic fold. It is, at best, a temporary and fraught marriage of necessity, one that we should want to exit as soon as possible.

As Alexandria Ocasio-Cortez has said in the past, in any other country she would not be in the same party as Joe Biden. That has never been more clear than in the aftermath of Joe Biden’s decision to crush railroad workers’ right to strike to win paid leave. And Democratic leaders know that we are in — at the very least — a cold war with them. Hakeem Jeffries once said that “there will never be a moment where I bend the knee to hard-left democratic socialism.” We should be just as clear eyed.

If we on the Left really want to build a popular alternative to the Republican and Democratic parties and the Freedom Caucus, we need to create as much daylight between us and them as possible. Using high-profile leadership fights to draw out the lines of division between us and Democratic leaders is one very appealing tactic for doing so.

Imagine in 2024 that Democrats retake the House of Representatives. For weeks leading up to the election to make Hakeem Jeffries the next Speaker of the House, the Left goes on the offensive, appearing on major talk shows, blanketing social media, and organizing rallies in critical districts to oppose Jeffries’s ascent to leadership. Not only have right-wing Republicans shown that such a fight could strengthen a minority’s hand in Congress, but such a fight would have the added value of drawing out the contrasts between the Democratic leaderships’ conservative agenda and the Left’s much more popular program.

Using the Bully Pulpit to the Fullest

Democratic socialists use electoral politics and our position in legislatures to build our popular base, especially in a period like the one we’re in now, where major reforms are not on the agenda. Offices in Congress and state legislatures can be bully pulpits from which to spread democratic socialist ideas and rally millions to a program of transformational change. As Bernie Sanders once said, the role of a socialist in the White House would be to serve as an “organizer-in-chief.” A similar job description applies to socialist legislators.

Fulfilling that role requires that we use every tactic available to us to get our message out there and explain to millions of people the nature of the political battles being waged. In the last few weeks, the American right showed us just how much room there is in Congress to propagandize for one’s politics and build power. Take notes. Our time will come, and we should be as prepared to fight as they were.