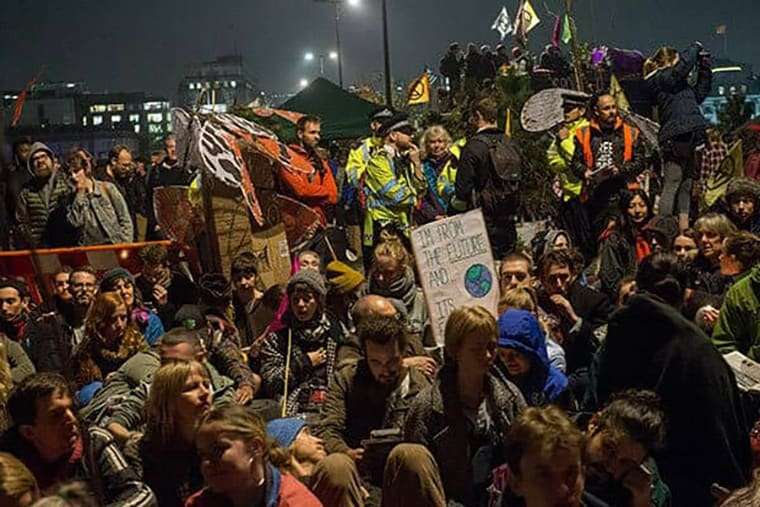 Extinction Rebellion’s recent “We Quit” statement has accelerated a debate about what strategy and tactics are needed to stop environmental collapse. The group is seeking to move away, at least temporarily, from what have been its hallmark disruptive methods.

Many of its leading figures argue that such actions have become unpopular and are a block to the effective movement that can win change. Jon, who has been in Extinction Rebellion for three years, explained to Socialist Worker, “The statement is about lowering the barrier to entry for people to get involved.

“It will be clear you don’t have to take a particular path to be part of Extinction Rebellion’s actions. We’re putting down the glue bottles and prioritising large mobilisations. This will hopefully bring everyone to parliament on 21 April.”

Socialists support both mass mobilisations and direct action to achieve change. And often the most effective movements combine both.

The great anti-war ­mobilisations of 2003—both on 15 February as part of a worldwide day of action and on the day the war began—saw millions on the streets. People blocked roads and caused widespread disruption as they raged against the outbreak of the killing.

The protests were not, in the end, enough to stop that war. But, particularly in Britain, they left a legacy of joint working and anti-imperialist sentiment.

This made it far harder for governments to launch new invasions. And they undermined for huge numbers of people the lies peddled from the top about “humanitarian intervention”.

The poll tax demonstration and riot of March 1990 sealed the fate of the tax after a long period of mass non-payment and militant protests. It also was crucial in pushing out Margaret Thatcher as Tory prime minister.

The furious protests outside the World Trade Organisation gathering at Seattle in the US in November 1990 spurred an extension of the global anti‑capitalist fightback.

Direct action can also spur wider revolt. It can rip up ordinary people’s notions of what is possible and erode the idea that we have to sit back and obey the law while those in power run the system for us.

It can take the state by surprise, garner more media attention for the cause, and promote important discussions. The Native American protests from 2016 at Standing Rock over new oil pipelines became a catalyst for a bigger wave of environmental resistance.

The Fridays for Future school student protests began as individualistic and local witnessing against climate chaos. But they expanded to become a powerful worldwide hub and focus of resistance which changed the whole debate. So it’s never a good idea to crudely say “just march” or “just sit in the road”.

There is a big danger in the Extinction Rebellion statement. The idea that disruption “puts off” people can become a reason not to support some strikes. NHS strikes are undoubtedly disruptive, and inevitably impact ordinary people, but they are wholly justified.

Joining a demonstration of 100,000s gives a sense of collective power. Sometimes when large numbers of people take part in protests, they feel confident enough to take part in more confrontational direct action.

A good example of this is when the UCU union and the National Union of Students organised a demonstration against a rise in student fees in 2011. They initially believed about 15,000 would show up.

More than 50,000 students came and then occupied the Tory headquarters at Millbank Tower in an expression of rage.

Extinction Rebellion’s first International Rebellion in 2019 saw mass participation combined with direct action that brought central London to a standstill. It took days to clear the streets. At this rebellion thousands of people discovered that they wielded power they never knew they had.

At its most militant, workers’ action can also show how society could be run much differently

But no number of demonstrations, however large, or smashed windows will be enough on their own to win.

The Polish-German revolutionary Rosa Luxemburg wrote about terrorism and compared its results to mass working class action. She wrote that even the most successful terror acts were “upward ­sizzling bursts of flame in the midst of the mighty blazing sea of a forest fire”.

Stopping the world being reduced to a wasteland of fire and floods will require a movement that can tear down the system as a whole. The most powerful weapon against capitalism is when workers stop producing and cut off the source of profits.

It’s not the only form of struggle, but it is the one that can have the biggest effect. And in the course of mass strikes workers can change themselves at the same time as they shift the society around them.

When workers withdraw their labour they have the power to bring society to a standstill and disrupt the flow of profits. In doing so—just as with the other forms of direct action mentioned above—they can also lead people to challenge and question the way society runs.

For example, a common complaint gets raised on almost every picket line you could visit lately. “We worked through the pandemic, we got our bosses through and made sure everything didn’t just stop working.

“We even made sure they could keep making their profits. And now we’re getting punished.”

At its most militant, workers’ action can also show how society could be run much differently. Every time workers go on strike, they show that nothing can work without their labour.

And if that’s the case, they can also show that they can run society for themselves—and with a different set of priorities. This is where battles over the climate can intersect with workers’ action.

For a start, climate issues are often class issues—as it’s workers and the poor who bear the brunt of the effects of climate change.

Here in Britain, for instance, we’re already having to face up to the realities of living and working in ever more extreme weather. What’s more, we’re having to pay for the privilege—with the same fossil fuel companies responsible for the crisis also jacking up our energy bills.

In the Global South the link is often even more pronounced. In countries such as Iran and Iraq, workers and the poor have protested over water shortages.

Direct action—how do we change the world?
Read More

In countries where fossil fuel companies operate, activities such as flaring—burning off excess gas created by oil extraction—is both a major source of emissions, and damaging to the people who live nearby.

Bringing these demands together can mean pushing for trade unions to take up climate demands. But it has to go much further.

A large and militant climate movement can pose a challenge to the government, just as it did in 2019. It could be another powerful factor in the crisis of the rulers at the top.

In turn that can give confidence to everyone who’s ­fighting them that those at the top can be beaten. The excitement, militancy and tactics of the climate movement could be brought into workers’ struggles, taking them beyond the tightly controlled action organised by union leaders.

And, in return, the strength of such action can be a demonstration of where our power in society—and our potential to change it—lies. In such an atmosphere, all sorts of demands and issues intermingle and become united against the common cause—the system that ruins our lives and livelihood for profit.

It takes a lot of work and vision to build a movement like that. And certainly it means working to make sure that movement draws in as many people as possible.