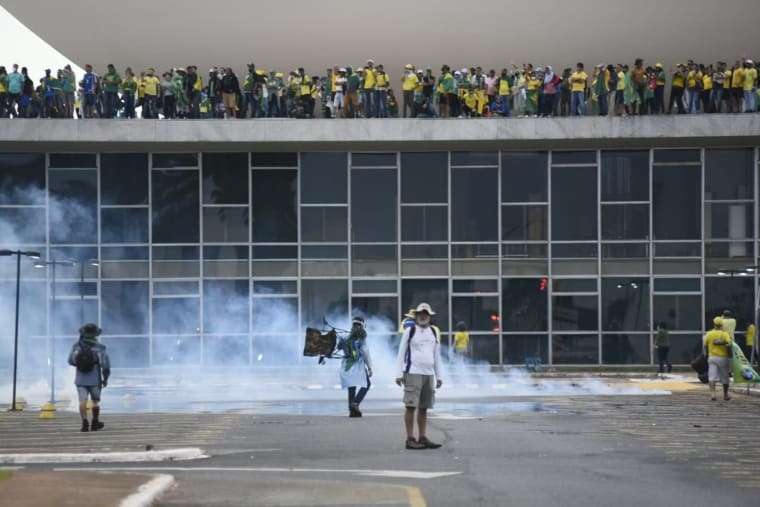 Thousands of supporters of Brazil’s former far right president Jair Bolsonaro have stormed the congress and supreme court and surrounded the presidential palace. The far right and fascists are at the centre of the anti-democratic assault.

In an echo of Donald Trump’s supporters, they lie that recently elected president Luiz Inacio Lula da Silva won through fraud and is out to install a Communist regime.

Bolsonaro, who is now in the US, has never accepted his election loss and last month called on his backers to stay vigilant. He claimed still to be “the supreme chief of the armed forces”, which he described  as “the last obstacle to socialism.” His speech was followed soon after by violent protests in the capital Brasilia against the official certification of Lula’s victory.

Lula called those behind the storming of Congress “fanatic fascists” who represented “everything that’s abominable” in politics. He repeatedly said, “These fanatics have done something that’s never before been done in this country.” Lula condemned the cops. “The police didn’t do anything at all. They just let the protesters in,” he said.

But it’s precisely these state forces, and the elites they back, that Lula has compromised with and sought to appease. His first cabinet included nine members of the right wing Brazilian Democratic Movement (MDB), Brazil Union and the Social Democratic Party (PSD).

The MDB was crucial to the 2016 impeachment of president Dilma Rousseff, which Lula’s Workers’ Party (PT) calls a coup. The Brazil Union has come from a merger of the party that elected Bolsonaro in 2018 and the party of the former military dictatorship.

In contrast to Lula’s retreats, his enemies have steadily organised and now mobilised. After Lula’s victories, Bolsonaro supporters created camps in many cities across Brazil—many of them outside the military barracks.

They argued for the military to intervene. A US-backed military dictatorship ruled in Brazil for two decades from 1964 to 1985.

Lula is still relying on the state forces to deal with the Bolsonaro supporters. He has ordered in the National Guard. Workers can have no confidence in such forces, which may go over to the coup at any point.

Instead, workers must organise independently, taking to the streets and launching a general strike. Over 60 million people voted for Lula, including overwhelming majorities in many working class areas. They have to act, not rely on the state.

Imperialist governments and sections of capitalists are presently not openly backing the removal of Lula. US secretary of state Antony Blinken tweeted on Sunday night, “We condemn the attacks on Brazil’s presidency, congress, and supreme court today. Using violence to attack democratic institutions is always unacceptable. We join Lula in urging an immediate end to these actions.”

But if the coup begins to win, the US and bosses will switch sides. A victory for the coup would be a disaster for Brazil’s workers and the poor. But it would also be a huge boost to the far right everywhere. Workers must move to stop it.