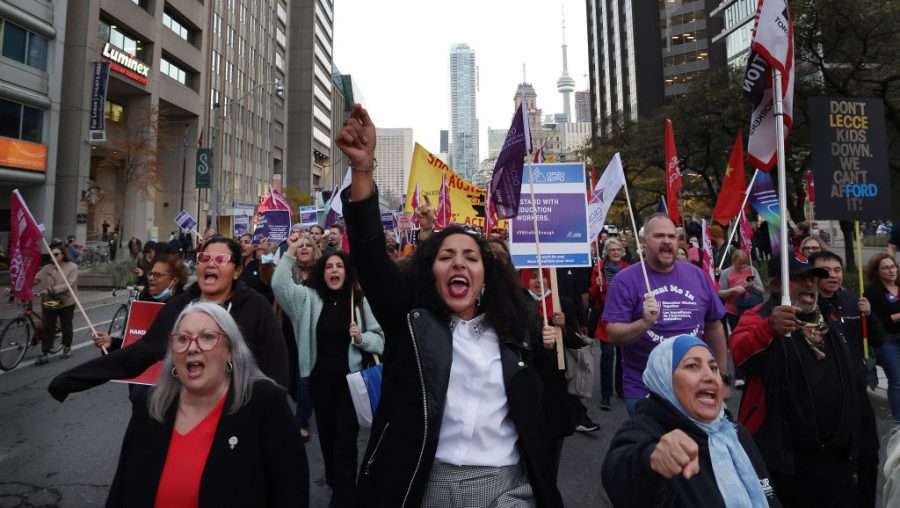 A tight labor market, rising inflation, and the usual indignities of capitalist workplaces are emboldening young workers to organize. The result could be a game changer for Canada’s private sector unions.

A “budtender” at a cannabis store in Victoria. An employee at a movie theater in downtown Vancouver. A cashier at a university grocery store. They don’t have much in common, except that they and their coworkers voted to join a union in the past month.

After decades of decline, private sector unions in British Columbia are gearing up to grow, hoping that a combination of high costs, low unemployment, and new changes to provincial law will pave the road for expansion.

It’s happening where you might not expect it: in cafés, cinemas, and other brick-and-mortar businesses with relatively few staff and high turnover. Call it the Starbucks effect. Organizers say the high-profile union drives at the coffee giant’s stores in the United States — and now Canada — have had a ripple effect, emboldening young workers already itching for change as inflation eats into their savings.

“I hate to call it a perfect storm. But we’re sort of in this moment that workers who have not traditionally had access to joining unions are now considering joining,” British Columbia Federation of Labour president Sussanne Skidmore said.

The question now is whether they’ll be able to capitalize on the moment — and if unions can meaningfully reverse decades of decline in private sector unionization rates.

The Benefits of Card Check

“I wouldn’t say it’s going to be a boom time,” University of British Columbia labor economist Craig Riddell said. “But we probably will see some more success in the private sector for unions than we’ve seen in the past decade or two.”

Evan Strain got a job at the movie theater before the end of his senior year. The eihteen-year-old slung popcorn, sold tickets, and was laid off along with the rest of the staff when the COVID-19 pandemic arrived.

When he came back to the Cineplex in Strawberry Hill, Surrey, Strain noticed problems. Suggestions to management were ignored. Equipment was inadequate. When he was promoted to supervisor, he got a raise of just twenty-five cents an hour.

“I was like, this is not worth this wage. But I really cared about my fellow coworkers and my fellow supervisors who I had been with for a few years,” said Strain, now twenty-one.

“So I was like, can I unionize this movie theatre?”

By the time management knew, it was done and dusted, thanks largely to New Democratic Party government legislation passed this year that lets workplaces unionize automatically if at least 55 percent of workers sign a card.

Previously, workers had to sign cards and then take a second vote to confirm certification. In the interim, Patrick Johnson of the United Food and Commercial Workers International Union (UFCW) says that management would often employ a mix of carrots and sticks to dissuade staff.

“We’ve seen pizza parties. We’ve seen ice cream socials. We’ve even seen the employer take everyone out for nachos and a spa day,” said Johnson, the secretary-treasurer of UFCW Local 1518.

The new, single-step process — known colloquially as “card check” — has changed that.

Riddell says that it comes as many workers have been looking to unionize thanks to a combination of rising costs and a tight labor market. A November analysis from the federal government pegged British Columbia’s overall unemployment rate at just 4.4 percent — slightly up from October but below the Canadian average of 5 percent. That means workers have options. Employers, less so.

“The overall picture is good for union organizing,” Riddell said. “A tight labor market is positive. People are less worried about job loss, because there’s lots of alternative jobs . . . and they are certainly concerned in making gains on the wage front.”

The numbers have yet to bear that out. The Labour Relations Board and Statistics Canada track the number of certifications as trade unionization rates, but likely won’t have solid data for months.

Anecdotally, though, many unions are already noticing more activity. Nav Malhotra, of the Laborers’ International Union of North America (LIUNA), says that his local, which represents construction workers, has seen growth of 26 percent over the past year. The union now counts more than ten thousand dues-paying members in British Columbia and the Yukon, the largest it has ever been.

“If I look at the numbers as a whole, even at the board, we are getting more signatory companies becoming unionized, and it’s been quicker,” said Malhotra, the business manager at LIUNA Local 1611.

The Retail Wholesale Union’s Randy Anderson-Fennell says that they recently organized two stores, their first new additions in a decade.

“I can tell you with our first shop, I’m not positive the outcome would have been the same as it was under card check. The employer immediately went out and intimidated the workers, and we heard about it,” Anderson-Fennell said.

Both those locations, he said, were small retail stores with high turnover. There are various reasons that those kinds of workers are unionizing. One is card check. Another big one, mentioned by many organizers and workers, is Starbucks.

In recent years, more than 250 of the coffee chain’s locations in the United States have unionized. So have a handful of Canadian shops. The visibility and size of that union drive, which is organizing workers store by store, has emboldened other retail and services workers. Many, Johnson said, are young workers who may only be in a given job for a year or less.

“We are undeniably seeing younger workers in shorter-term jobs unionizing at a higher rate,” Johnson said.

Thomas Reimer counts himself among the inspired. In 2021, Reimer helped lead a charge to organize Seed and Stone dispensary in Victoria, which joined the “BC [British Columbia] Bud” division of UFCW 1518. Reimer was frustrated, he said, by the high turnover at the store, which left him with supervisor-level duties after just a month on the job.

That high turnover was also the biggest barrier to negotiating their first contract with the company. Reimer said the process took months. By the time they got to the table, a good number of the staff who had voted to unionize were gone.

“It was definitely a marathon and not a sprint,” Reimer said.

Al Bieksa is the president of United Steelworkers Local 2009, which represents Starbucks workers in three locations across British Columbia. He says that the precarious nature of work in those stores may be why workers want to unionize. But that precarity also makes it harder to build the long-term organizing and support needed to finalize a first agreement.

“We’re trying to put together a bargaining committee, but we’re having a hard time putting the committee together because all the people who voted for the union are gone,” Bieksa said. He said employers can take advantage of that by punting the start of bargaining further down the road.

“The longer they stall, the less chance we’ll ever get to a collective agreement,” Bieksa said.

That could be a key challenge for unions hoping to expand their reach in those types of businesses, where Skidmore said unions don’t traditionally have as many members.

In 2021 only 30 percent of British Columbian workers were covered by a collective agreement, according to Statistics Canada. That figure includes the public sector, where more than three-quarters of workers belong to a union. Numbers are considerably lower in private businesses, Riddell said. Fewer than one in five private sector workers in Canada are unionized, a rate that has steadily declined in recent decades.

Riddell believes that those rates will increase, but not by much.

“It may turn around now, but the factors that led to the decline are still largely there,” Riddell said.

Skidmore is more optimistic. The federation leader said shortly after her election in November that she wants the organization’s member unions to focus on growth, particularly given the frustration workers have with the rising cost of living and warnings about a coming recession.

“It seems inevitable we will see some growth,” she said. “But the question is, does it reach into areas where we do not traditionally see union growth?”

Strain, the former Cineplex supervisor, already knew he would likely leave the job when the unionization drive kicked into full swing. He said he and other workers stuck around, in part, to make things better for the people who came after.

“They were very willing to make sure other employees wouldn’t have to go through what they went through,” Strain said.