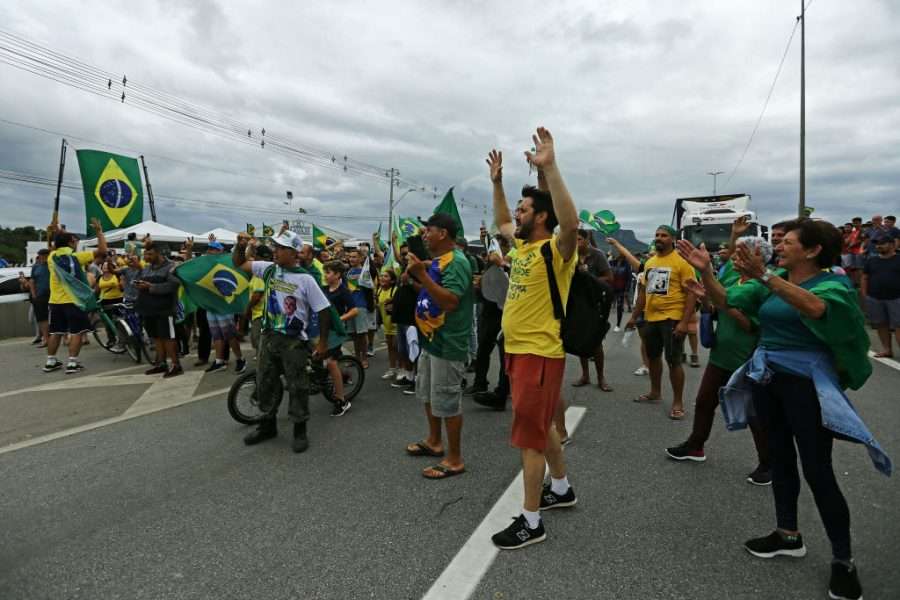 Yesterday’s insurrection against Lula’s elected government in Brazil wasn’t a fluke – it was part of an international far-right attack on the idea of democracy.

Truck drivers and supporters of Jair Bolsonaro blocked Via Dutra to protest against the results of the presidential run-off on 31 October 2022 in Florianopolis, Brazil. (Heuler Andrey / Getty Images)

Last night, thousands of supporters of Jair Bolsonaro stormed Congress, the Presidential Palace and the Supreme Court in Brasilia. Descending on the country’s capital, the far-right mob called for the resignation of the newly elected President, Lula Inacio da Silva, and for the intervention of the military to halt the peaceful and democratic transfer of power.

The attempted coup drew immediate parallels to the January 6th insurrection in the United States two years and two days ago, when Trump supporters invaded Capitol Hill. Both had been fuelled by widespread misinformation that the elections were rigged and by a dangerous far-right leader who inspired their supporters into authoritarian action. Brazilians, however, do not need to travel across the Atlantic Ocean to be reminded of what the far-right is capable of.

In 1964, rebel troops in the Brazil Armed Forces ousted the left-wing, democratically elected President, João Goulart. Supported by the United States government, the coup would turn into a dictatorship, lasting until 1985. During that time, the dictatorship was responsible for more than 400 deaths and disappearances; over 20,000 people were tortured, primarily to gain information on the growing resistance. That included Soledad Barrett, Pauline Reichstul, Eudaldo Gómez da Silva, Jarbas Pereira Márquez, José Manoel da Silva and Evaldo Luiz Ferreira. As six members of the resistance, they were kidnapped, tortured, mutilated and killed in what is now known as the São Bento massacre. The date of their death? The 8th of January, 1973, exactly fifty years since last night’s insurrection.

Yesterday’s coup attempt does not just strike fear into the hearts of those who remember the scenes in Washington. It strikes fear into the hearts of those who live with the memory of fascism, authoritarianism and militarism in their own land. Not least because Bolsonaro himself has openly expressed support for Brazil’s 21-year dictatorship, telling an interviewer that ‘you’ll never change anything in this country through voting. Nothing. Absolutely nothing.’

Bolsonaro denies any role in the insurrection. However, by frequently raising doubts about the integrity of the election and by refusing to attend Lula’s resignation (breaking with custom for the outgoing president to hand the sash to the incoming president), there is no doubt that Bolsonaro’s most extreme supporters have been emboldened by his contempt for democratic processes.

Perhaps what is most distressing about last night’s events is the ease with which state institutions let it unfold. ‘The police didn’t do anything at all’, Lula said in a press conference last night. ‘They just let the protestors in’. It was police officers, remember, that blocked roads and conducted unwarranted vehicle searches in Lula strongholds areas across Brazil on election day. The Brasailia governor, Ibaneis Rocha, has been suspended for his complicity in the insurrection, accused of collusion with the military police (Brazil has three main police forces: federal, civil, and military), who can be seen escorting the demonstrators toward the Plaza of the Three Powers. It’s worth noting that the military police was established as an institution under the dictatorship.

At the very least, authorities certainly cannot pretend they didn’t see this coming. In September 2022, I joined 150 parliamentarians, ministers and ex-presidents from 26 countries in signing a letter, written by Progressive International, warning that this may happen. Just last Saturday, a man was arrested for allegedly attempting to detonate a bomb in protest of Lula’s victory. Bolsonaro, he said, had inspired him to do so. Law enforcement had been warned but did nothing. They knew about the existence of a well-financed far-right. They did nothing. They could see Bolsonaro’s supporters instigating a coup. They did nothing. At the very least, then, those in charge of public safety exhibited a negligent indifference to what was brewing. The problem is not simply those on the streets who have been radicalised. It’s their relationship with those in the security forces who dream of a return to dictatorship.

Ultimately, the insurrection is a reminder of the additional barriers that left-wing governments must overcome to achieve real change. Lula campaigned on a platform of social justice, indigenous rights and an end to deforestation. It’s not just the transformative program that has compelled the intolerant far-right to throw their toys out of the pram. It’s the nature of how this transformative program was won: by mobilising a coalition of political parties, trade unions, and social movements—parties, unions, and movements that brought millions of workers, Indigenous people, and marginalised communities together.

Last night’s coup attempt, however, is not just about Lula, nor even the millions who voted for him. It’s about the right of the Brazilian people to live in a free, fair and peaceful society, and a right not to live in fear that the violent and bloody dictatorship will return. Those who stormed Congress did not just launch an assault on Lula and his supporters. They launched an assault on democracy and on the Brazilian masses.

It is unlikely that last night’s events will enjoy the same continued coverage as the events in the United States two years ago. Perhaps it’s because fewer commentators are concerned by coups that overthrow a left-wing government. Perhaps it’s because the coup is happening in South America. Most likely, it’s both. Those of us who understand the significance of Lula’s victory know what’s at stake if it’s taken away. We know that democracy is worth fighting for.