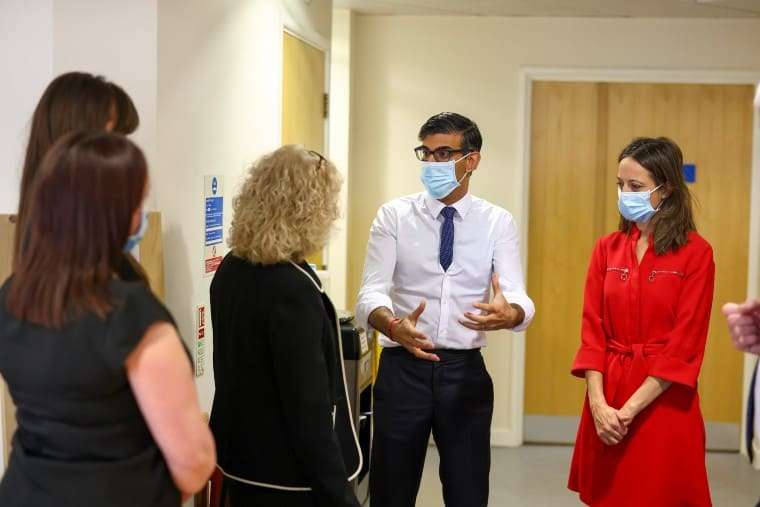 The Tories are in turmoil about the crisis in the NHS (pic: Number 10)

Tory ministers tried to use empty negotiations to get trade union leaders to call off strikes this week. But the strategy failed—at least for now.

After weeks in which Rishi Sunak repeatedly denied that the NHS is in crisis, the government  said last weekend that it wanted to talk to trade unions. But when unions met ministers on Monday they soon realised that nothing substantial was on offer.

That means ambulance strikes set for this Wednesday and nurses’ strikes planned for 18 and 19 January are set to go ahead. Sara Gorton, head of health at the Unison union, said there had been no “tangible” offers from the government. A GMB union source said the union had gone in expecting a cash offer to be made, but that with “nothing concrete” its strike would go ahead.

Everyone can see that the NHS is on its knees and that health workers are striking out of desperation. Their real terms pay has been slashed every year for a decade, and now it is almost impossible to recruit enough staff.

The government’s meeting with the unions this week was an attempt to trap them into talks about next year’s pay offer. But so far, no union is biting. Yet RCN leader Pat Cullen last weekend made a dangerous concession.

She said she could halve the union’s pay claim—which is for inflation plus 5 percent—if that would get ministers around the table. RCN rep Matt, who is a nurse in the Midlands, is not impressed.

“I don’t think it’s fair to members for Pat Cullen to reduce the original pay claim.  “It shows a sign of weakness that this government will attempt to use to its advantage,” he told Socialist Worker.

Health secretary Steve Barclay’s attempts to deal with the immediate NHS crisis is yet another ­dangerous attempt to cut corners. Thousands of medically fit patients cannot be discharged because social care has all but collapsed.

Barclay hopes that some can be shunted to private sector nursing homes to ease the pressure. But bosses there are now ­demanding £1,500 a week, double the usual fee, to look after discharged patients.

That means the emergency £250 million the health secretary ­promised will soon be lining the pockets of investment funds and shareholders. Barclay’s other “great idea” is to expand the use of “virtual wards” to free up hospital beds.

But using remote technology to monitor patients transferred to hotels and back home can only work if there are enough qualified staff to check on them. And if there’s a way to rapidly intervene if something goes wrong.

These services are already stretched to the limit. Without a decent pay ­settlement, the NHS staff shortages and beds crisis can only worsen.  That’s why unions must not be tempted by shoddy deals and ministers’ talk of jam tomorrow.

More action is the way to win a sorely-needed victory.

‘We deserve better than this’—an ambulance worker speaks out

Ambulance worker and Unison activist Tom Gibbons explained why he was ready to strike when he addressed a support rally in Manchester last weekend.

“I’ve worked on the front line as a paramedic for six years, and I am so, so tired. I’m tired of working harder for the same pay that no longer stretches anywhere near where it once did— and working alongside colleagues who are suffering real terms pay cuts of up to 20 percent.

I’m tired of turning up for 12-hour shifts knowing that I won’t be able to give effective care to patients that need and deserve it because I’m stuck in a hospital corridor or outside and A&E. This NHS cannot stand the stress that its currently under because of the chronic underfunding it has experienced.

Nurses’ and ambulance workers’ strikes—when and where
Read More

And, I’m so, so tired of watching talented colleagues—from call handlers to advanced paramedics— struggle to make ends meet. Some of them only make £1.12 above the national minimum wage. That’s £1.12 to give life saving advice as the first person that answers your call.

We all deserve better than this. It’s encouraging to be standing here surrounded by brothers and sisters from the CWU, the RMT and the Fire Brigades’ unions. I never wanted to be in this position. If you had told 21 year old Tom, who was starting his career in the NHS, bright-eyed and bushy-tailed, that the NHS would be in the fractured state that it is now, he’d have never believed you.

I’d never have believed that it would be picked apart by the private companies and the Private Finance Initiatives, and the Tory government that have nothing but cut and cut. And we’re being led by somebody that I didn’t elect who is worth more than me and my working class family will earn in an entire lifetime.

I’d never have believed any of this. This government has shown that the only way to protect the NHS is for those that work within it to fight for it. And I can assure you that there are people within the ambulance service that are willing to take on that fight.

I look forward to seeing you all on a picket line in the future.

Five reasons to hit back at privatisation of the NHS

Labour and Tory politicians are in agreement. They both say that no more money can be spent on the health service without “reform”.

What do they mean by reform? The answer is almost certainly far greater privatisation. Here are five reasons why we should be against it.

1 Profits first puts us all at risk

The first duty of private firms is to make money.

A recent report by the Lancet medical journal says that outsourcing care to for-profit firms is associated with increased deaths among patients. In the private sector patients are usually in the hands of a single doctor, while in the NHS you get a team—and a chance for a second opinion for free.

In the NHS there’s no incentive for clinicians to recommend unnecessary tests and treatments.  But in the private sector every extra scan is more pounds in the company’s pocket.

For-profit firms don’t train health workers. Only the NHS does. That means rather than providing the health service with extra capacity, they drain it. Staff working in private firms are often NHS employees doing extra shifts.

Every doctor helping a private patient jump the queue could instead be dealing with someone on a waiting list.

Most costly procedures are done in the NHS, but the ones that generate the most cash are outsourced.  This undermines the NHS finances as operations are paid for using an internal market.

For example, a coronary heart by-pass operation costs the NHS less than £10,000. But if the job is outsourced privately, the cost is around £20,000.

It is impossible to manage an organisation the size of the NHS if it is broken up into hundreds of competing bodies.  And in order to try, a huge bureaucratic machine is required to manage payments, staffing and standards.

That’s all money that could be better used.

5 When something goes wrong, the NHS picks up the pieces

Because private hospitals leave emergencies to the NHS if something goes wrong with a patient’s treatment it won’t be a private firm that deals with the crisis. An NHS ambulance will have to pick the patient up from the private hospital and transport them to an NHS hospital, so they can be treated by an NHS doctor.

And it’s all at our expense.

London’s A&E crisis means ambulance bosses have instructed crews to hand over patients at hospitals within  45 minutes, even if staff there are overwhelmed. An email leaked to ITN news says, “We are asking that any patients waiting for 45 minutes for handover and are not in a cohort (being looked after at hospital) are handed over immediately to emergency department staff allowing the ambulance clinicians to leave and respond to the next patient waiting in the community.”

That could mean that once 45 minutes are up, crews are expected to take their patient into the hospital, catch the attention of a nurse, point to their patient, get an acknowledgement, and leave.

One London paramedic told Socialist Worker that the practice was “intrinsically unsafe.”

“It might free-up some crews to go and get more patients, but they will then be stuck outside A&E themselves because services are totally over-run.”