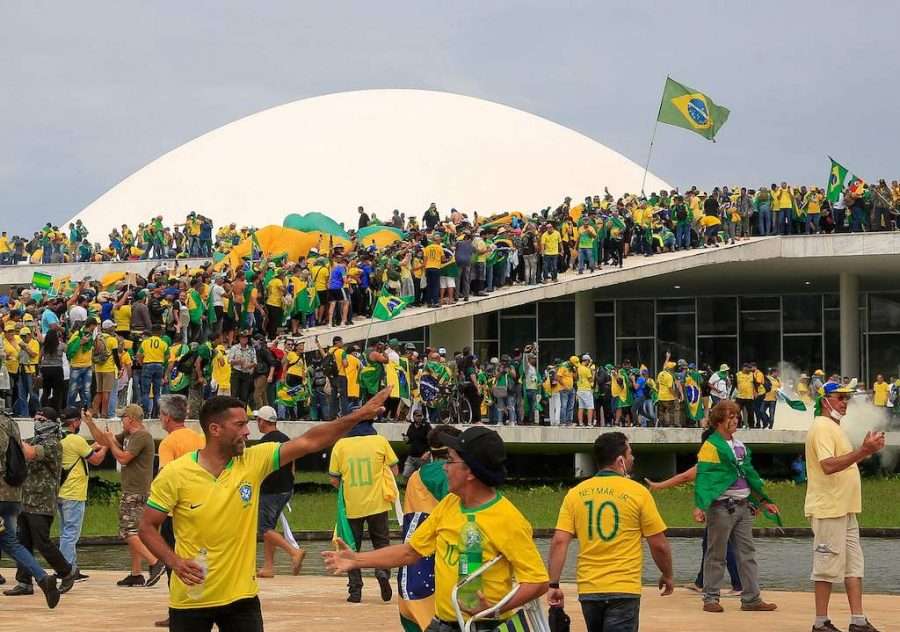 Supporters of Jair Bolsonaro went on a rampage in a bid to oust Lula’s newly elected government. The antidemocratic thuggery in Brasília has exposed the authoritarianism of Bolsonaro’s political camp and underlined the need for a decisive fightback.

This Sunday, thousands of supporters of Brazil’s former president Jair Bolsonaro broke through police barricades in the capital Brasília and invaded the National Congress, the Supreme Court, and the president’s official residence at the Planalto Palace.

It took several hours to remove the crowds, who opposed the inauguration of Bolsonaro’s opponent Luiz Inácio Lula da Silva. There were hundreds of arrests. Bolsonaro’s supporters vandalized government buildings and destroyed countless documents, historical artifacts, and works of art.

The occupation of all three houses of government dramatically symbolized how fragile Brazilian democracy has become. The response of the new government will be crucial for the health of Brazil’s institutions.

From Trump to Bolsonaro

The obvious point of comparison is the Capitol Hill riot in the United States on January 6 two years ago. From the use of social media as a coordinating tool to the lackluster response of law-enforcement agencies and the aimless behavior of the crowd once they found themselves inside, there were indeed striking resemblances between the two events. Much like their US counterparts, Brazilians watched on TV as a reactionary crowd spurred on by a defeated far-right president invaded the seats of democratic power and live streamed their behavior with seeming impunity.

Will the response of the authorities in Brazil be different? This was Lula’s reaction to what happened:

These people, these vandals, that we could call Nazi-fanatics, or Fascist-fanatics. These people have done what has never been done in the history of this country. I want to remind you all that those from the left have been tortured, killed, and disappeared with in the past, and you’ve never read the news that some left-wing party, some left-wing movement has invaded the National Congress, the Supreme Court and the Planalto Palace.

The new president was visiting a community in Araraquara that has been severely affected by heavy rains in the region. He ordered a federal intervention, effectively placing the Federal District under the direct control of his administration until January 31.

Lula has promised that those responsible for the invasion will be prosecuted and punished with the full force of the law, as will those who financed it. When he was inaugurated at the start of January, Lula spoke in no uncertain terms about the unacceptability of political violence. While his rhetoric has stressed the themes of inclusion and magnanimity, his attitude toward the undemocratic behavior of the far right has been uncompromising.

Lula has condemned the response of the Federal District’s military police, who are responsible for the security of the area, pointing to the video evidence of police officers cooperating with and aiding the invaders. As Bolsonaro supporters had gathered in the capital over the past few weeks, setting up camps around the “Plaza of the Three Powers,” observers noted the lackluster presence of law enforcement.

The governor of the Federal District, Ibaneis Rocha, and its secretary of public safety, Anderson Torres, are both known to be avid Bolsonaro supporters. Torres is currently in Orlando, Florida, where Bolsonaro has gone after leaving office. Many on the Left thus questioned their willingness to preserve public order in the face of Bolsonarist aggression.

Now, with ample video evidence of police officers passively filming the violent mob and even guiding them through the barricades, Lula’s administration has acted. Under pressure from the Ministry of Justice, Rocha removed Torres from his position. A few hours later, Supreme Court justice Alexandre de Moraes removed Rocha himself as governor of the Federal District for ninety days.

Justice Minister Flavio Dino, one of Brazil’s leading left-wing figures, has promised further arrests on top of the approximately four hundred that we have already seen. A joint operation of the military police and the army has dismantled the camps set up in Brasília. More than forty buses that were used to transport Bolsonaro supporters to the capital for the event have been impounded for the investigation.

A Challenge to Democracy

There has been no rhetorical soft-soaping from government officials when describing the perpetrators of these acts, whom they have described as vandals, fascists, criminals, and terrorists. The Brazilian executive, legislative, and judiciary have all promised punitive action in response.

Lula called an emergency meeting with Brazil’s governors for Monday evening to discuss a response to the current crisis and present a democratic front. However, many of these governors are recently elected opponents of Lula’s administration and supporters of Bolsonaro, so it remains to be seen whether unity in defense of democracy can be achieved between federal and state leaders.

Whatever happens next, the damage has already been done. The riots in the capital have peeled back the veneer of democratic renovation and peaceful transition associated with Lula’s inauguration to reveal a shattered republic. We will have to see whether the promises of sweeping punishment for those responsible are going to be delivered upon. But the decisive response of the new administration shows that Lula and his cabinet are not willing to tolerate a violent challenge to democracy from supporters of a disgraced politician who has fled the country to avoid arrest.