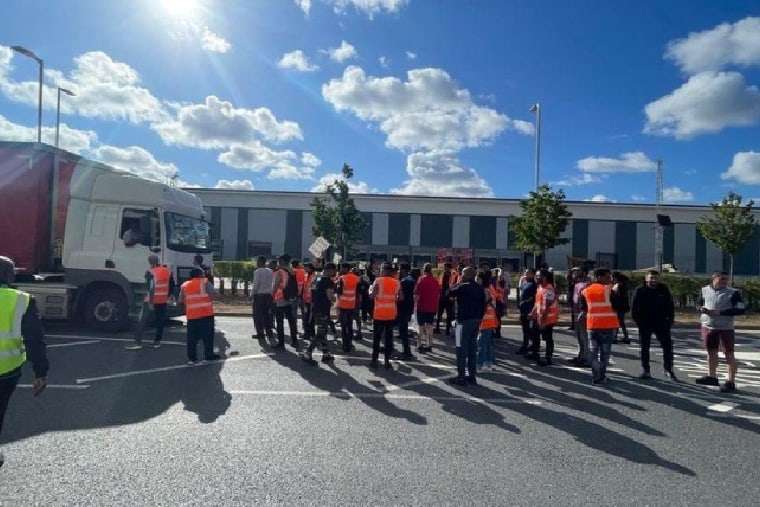 Amazon warehouse workers in Coventry are set to become the first in Britain to launch an official strike at the giant firm.

The action—set for Wednesday 25 January—comes after hundreds of workers at the fulfilment centre and across Britain took part in wildcat strikes last year. They were furious after bosses offered them a pay increase of just 50p an hour.

Members of the GMB union in Coventry then voted to strike by 98 percent on a 63 percent turnout. They now have two weeks to prepare and build the strikes.

Every effort should be made to ensure picket lines are as big as possible. Every trade union should offer solidarity to Amazon workers, who are taking a brave stand against the ruthless firm.

This strike could inspire others who work in fulfilment centres to strike too. And it will test whether the anger and militancy that prompted wildcat strikes will carry over into official action.

Bus workers employed by Abellio in south and west London continue to beat back poor pay with a series of strikes. The dispute initially involved 950 drivers, but the anger among the workforce is such that membership of the Unite union has doubled.

The workers have walked out for 16 days with five more strikes planned across January. Picketers remain determined to win with workers calling for more dates if an improved offer is not made.

The company has made profits of £353 million in 2021 but has imposed a poor offer of 12 percent. Unite says, “The deal does not meet the drivers’ demands and leaves full time drivers with under two years’ of service on £3.29 less per hour than their colleagues with more than two years.”

The next walk out was planned for Thursday with the last ending on 26 January. Workers must consider a further escalation, coordinating with other transport strikes when possible to win a real terms pay rise.

Almost 200 Stagecoach workers in Sunderland will return to work having won an 11 percent pay rise and £150 bonus after sporadic strikes since October. Drivers were angry at poverty pay and were struggling with the cost of living crisis.

Last week three quarters of workers voted to accept the new offer despite it being a real terms pay cut. There was scope for a larger victory if workers escalated to all out strikes. Stagecoach’s regional bus services doubled operating profits to £58 million in the financial year 2021 to 2022.

Strikes are best medicine at GSK

Construction workers at a GSK pharmaceuticals plant in Irvine, north Ayrshire, began strikes on Monday this week in a dispute over bonus payments.  Around 40 workers employed by contractor Kaefer Limited are demanding a bonus payment of £2.37 an hour.

This is the maximum allowed under the relevant industrial agreement. The Unite union members plan to continue strikes for two weeks unless there is a deal.

Action in balance after offer at Veolia

More than 180 Veolia workers at 22 household waste and recycling sites across Merseyside have suspended strikes following a revised pay offer.

The strikes were set to take place last week, but the Unite union officials called them off to allow workers to vote on the offer. If the offer is rejected, a week-long strike from Sunday of this week was set to go ahead.

Coffin factory workers in Glasgow have begun a fourth week of strikes over pay. The 50 strikers employed by Co‑Op Funeralcare walked back out last Wednesday and were set to stay out until Monday of next week.

Their last action was from 28 to 30 December, with their first beginning on the last week of September. They struck again in October and November.

Workers have rejected a pay offer of 4 percent for last year and 5 percent for this year. The Unite union says Cooperative Funeralcare has spent over £1 million last year purchasing coffins from third party suppliers when the dispute was on.

Strike will not be closed-circuit televised

Civil enforcement officers and CCTV operators in west London have threatened two weeks of strikes beginning on Wednesday of next week. Serco bosses offered parking attendants at Hounslow, Ealing and Brent councils a pay rise of just 20p an hour, and nothing for workers on the real living wage.