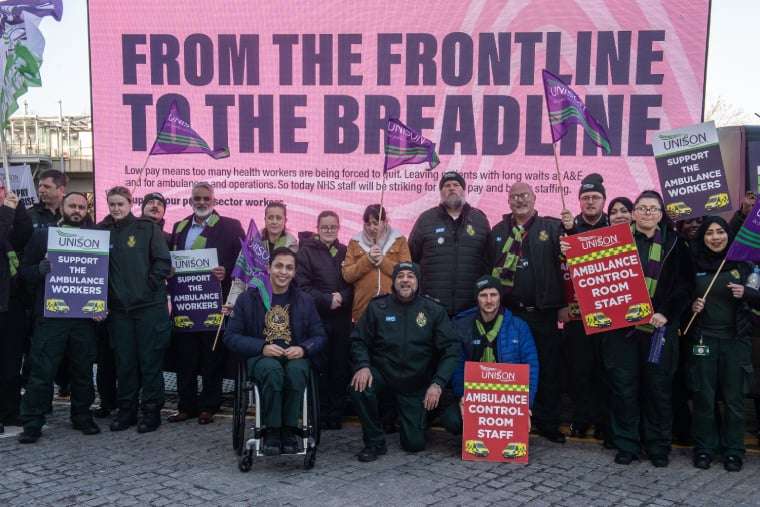 Thousands of ambulance workers across England and Wales returned to picket lines on Wednesday in their second day of strikes to save the NHS.

Officially, members of the GMB and Unison unions are striking over a lousy pay rise that averages just 4 percent. But workers across Britain told Socialist Worker the action is about far more than that—the whole future of the NHS is at stake.

Unison rep Tom is a specialist paramedic who works in ambulance control in Manchester. He explained that call handlers were joining the action for the first time on Wednesday and that the mood was buoyant.

“The last six months in the call centres has been a real struggle for people. The call queues have been horrendous and are really distressing for workers and those calling,” he told Socialist Worker. “People are relieved to finally be doing something about the NHS crisis.”

Tom said support from the public has been “overwhelming” and that hatred of the Tories is visceral.  “We’re facing a Tory prime minister that uses private health care, private schools, and private planes,” he said. “Of course he doesn’t care about public services.”

And, said Tom, ambulance strikes would continue until the government backs down. “We are willing to take them on and the unions are talking about stepping up the action, and more generalised action. We as workers have power and we’re willing to stick it out,” he said.

Ben, a GMB union rep in Brighton, was also bowled over by public support. “It’s really great to know that they have our backs,” he said. “The public have shown us they’ve made their own mind up about this dispute and who they support.

“People have been tooting their horns, bringing us cards, food and donations. And, there’s solidarity delegations from Unison and from the UCU unions.”

And, in Brighton too, there was a similar mood of determination. “The government is refusing to negotiate. They hope they can beat us with dirty media and the like,” said Ben. “But we can definitely win this, and we can be out on strike every week if we have to.”

Strikers at the Cody Road depot in Newham, east London, were also inundated with support. One member of the public even stopped his car to shake the hand of a striker.

And a large group of secondary school students also shouted their support as they passed. Paramedic Nick told Socialist Worker, “The government created this crisis. They were warned years ago. The workforce planning from our government is non-existent.

“It was back in 2017 when the House of Lords identified there were serious problems around recruiting, retaining and morale in the NHS.

“But now, in 2022, we’re struggling with chronic staff shortages. We don’t want to watch as patients are forced to wait more than an hour for an ambulance. It’s heartbreaking.”

In addition to public support, another feature of Wednesday’s picket lines was solidarity. In Chesterfield, a delegation of NHS staff, teachers and BT workers brought solidarity cards and donations to their local picket line.

Sam Ud-Din, secretary of the teachers’ NEU union, joined strikers in Lancashire this morning. He told Socialist Worker why. “Our rights have to be fought for now and for future generations by standing together with all like-minded people,” he said. “Our members have family members who work throughout the public sector.

“Mealy-mouthed platitudes from the government will not be accepted and threats will be resisted and lies and broken promises not forgotten.”

The combination of strikes, the NHS crisis and dire public opinion polls mean the Tories are now in desperate trouble. But trapped by their mantra that pay rises cause inflation, they cannot find a way to settle with the ambulance workers and nurses. That’s why the unions must keep piling on the pressure.

East London paramedic Nick explained to Socialist Worker what he thought a victory should look like. “We want meaningful negotiations and for us to be given a fair and decent pay rise that reflects the work that we do,” he said. “Part of winning will mean more people are encouraged to work in the ambulance services, and fewer will leave.”

Such a pay rise must be at least the level of inflation if it is to have the effect Nick rightly demands. That means no health union should be fighting for anything less. By organising more action and harder hitting strikes the unions can crack the Tories and their plans for even more austerity to come.

In Romford, Essex, strikers snaked across the main road a stone’s throw from Queen’s Hospital. The chatter of pickets could barely be heard above the almost constant stream of enthusiastic support for passing motorists.

Paul is a Unison rep and ambulance worker of some 30 years. He told Socialist Worker, “There’s more chance of getting an ambulance while we’re out on strike today then there is when it’s working properly.”

He said that the Tories’ underfunding of the NHS meant ambulance workers were trapped in an interminable waiting game outside hospitals, rather than delivering lifesaving care. “We’re queuing at hospitals. We can’t turn around. We can’t get back out on the road. We can be doing 13 or 14-hour days easily,” he explained.

He demanded that the government come to the table and start proper pay talks. “At least in the last five years my money’s not gone up with the rate of inflation, so we keep getting offered small amounts of pay, which is just wanton, laughable really.

Pay review bodies are a tool for the bosses
Read More

“Rishi Sunak’s problem is he won’t talk about pay. He still says that the pay review body will discuss ambulance workers’ pay, and that’s not what we want.”

Paul said a victory lies in “putting pressure on the government,” and looked to further strikes from health workers as a sensible next step.

“When we first came out it was just us, now our control room is out. Who knows? The next one, there may be more, our support services may go out,” he said. “The nurses are on strike as well, and maybe the junior doctors. It really ramps up the pressure.”

At Camden ambulance station in north London, strikers wanted to talk to Socialist Worker about how pay is connected to so many aspects of the NHS crisis.

“The big issue for us is pay—in the last 12 years we’ve had a progressive pay cut and wage freezes,” said Paula, a Unison rep. “Now with the cost of living crisis it’s unmanageable. And with the government underfunding, we can barely provide a service.

“We wouldn’t be able to function if it wasn’t for overtime. And I know people who have to do three overtimes a month just to be able to pay their mortgage. We care about our jobs—we don’t want to withdraw our labour. But the government won’t even sit down with us for talks.”

The strikers were running a “life and limb” emergency service while on the picket line. So they did not take kindly to Tory plans for new anti-union laws requiring minimum service levels.

“We’re already running a minimum level service while out on strike,” said Paula. “There’s no one here on strike that doesn’t care about the NHS and their jobs. We’re here to preserve it and make sure access to public health care can continue—we’re trying to stop its complete disintegration.”

Asked whether there would have to be more strikes to win, Paula answered, “Potentially, but we don’t want the strike to go on. We want the government to talk to us about pay and numbers.

“They need to talk to people to see where it’s going wrong—but they have no understanding. Low pay is a fight for everyone together—nurses and cleaners. They need to start thinking about how they can make primary care better so that secondary care can be better. Then there’s no need for A&E to be so overwhelmed.”

The strikes explained how a lack of doctors’ appointments mean people end up in A&E looking for help—and that in turn means A&E departments can’t cope.

As an example, one striker said that his mother had been unable to get a doctor’s appointment for a chest infection. It then meant using an ambulance and taking up a bed in A&E.

Strikers also work arduous long hours, often without proper breaks. “A 12-hour shift can easily become 16 hours if you have a big job,” said one.

Striker Stuart said, “If we’re tired and make mistakes people die—then we get the blame. We can’t solve this on our own, the problems are in A&E and social care too. It’s not of our making—it’s the system.”