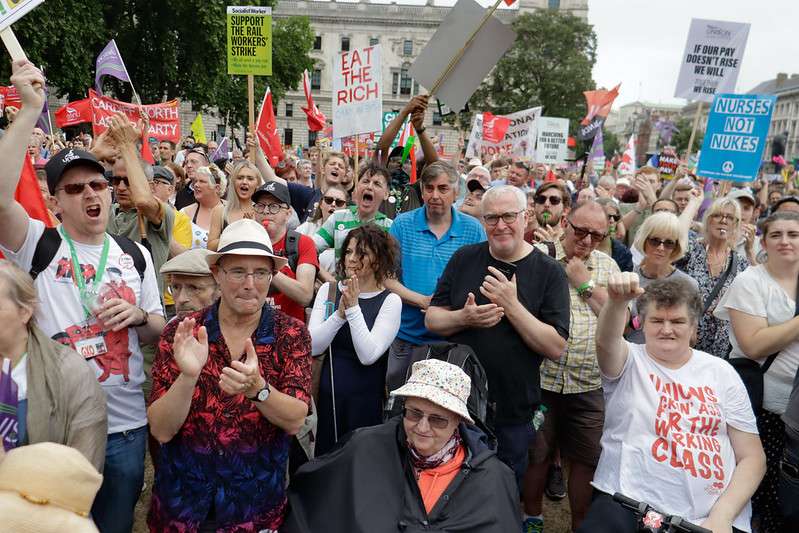 As the biggest strike wave for decades continues, the Tories have announced yet more anti-strike laws. In response, the Trades Union Congress has called a national ‘protect the right to strike day’ on Wednesday 1 February. Ian Allinson, author of Workers Can Win, argues that we have a week to make it a day of mass, coordinated strikes.

We are in the midst of the biggest wave of strike action in Britain for decades. It is driven by five factors: the rapidly rising cost of living, increasing the penalty for not taking action; a tight labour market, reducing the risk of taking action; years of accumulated grievances; a lack of belief that waiting for Labour will address our problems; and the inspiration of visible strikes, many of which are winning.

A weak government trying to keep the Tory base happy

The government is obstructing settlements to many of the disputes, even when the employers are not in the public sector, as for many rail workers. In health, they are still refusing to negotiate over pay, pretending the pay review body is both independent and sacrosanct. In reality its members represent employer interests, the government sets its remit, and its recommendations are often ignored if the government thinks it can get away with less. Inviting unions to ‘talks’ that weren’t negotiations illustrated the government’s weakness without fooling anyone. With no solutions to the problems facing British capitalism, much less working-class people, the government finds itself trying to appease the populist right in the parliamentary Tory party and their wider membership.

The bill is an attack on workers and democracy

The Strikes (Minimum Service Levels) Bill takes the concept from the Transport Strikes (Minimum Service Levels) Bill and enables it to be applied to health services, fire and rescue services, education, transport services, nuclear industries and border security. Workers are being punished for the failure to mount any noticeable resistance to the previous Bill. The proposed legislation would make strike action in wide swathes of the economy either unlawful or fairly ineffective. It is anti-democratic and repressive. As I argued in relation to the previous bill, it comes as part of a broader growth of the repressive state and restrictions on the right to protest.

Defiance and protest is the key

This creates the potential for solidarity encompassing trade unionists, environmentalists, anti-racists, Palestine campaigners, LGBT activists and more. The key to defeating repressive legislation and deterring its extension is defiance. Already there are industries, particularly construction, where few workers can strike lawfully because of subcontracting and workforce turnover. Union leaders are very reluctant to call or back unlawful strike action, which risks injunctions and unlimited fines. But workers in construction frequently strike – but they rely on rank-and-file organisation to do so, rather than waiting for a call from the top. When their action is most successful, they can push unions into official action, adding to their power. Last year we saw wildcat (unofficial, unlawful) action by workers at Amazon and elsewhere who weren’t even in unions.

So what are we to make of the TUC’s call for a national ‘protect the right to strike’ day on Wednesday 1 February? It would be easy to sneer at the suggestion of legal action and ‘events’ around the country. But that would be a mistake – the TUC’s naming of a day provides a focal point for action and everyone who wants to see a serious fightback should push it as hard as we can. I remember the TUC calling ‘15 minutes of action’ (not strike action) in support of an ambulance strike in 1990. Around 250 of us walked out of my workplace to march to the local ambulance station. As we walked, we were joined by workers from many local factories to a rally where strikers spoke from the roof of the ambulance station. It wasn’t enough, but it was enormously inspiring and a big step forward for the dispute. It gave confidence to ambulance workers in several areas to take wildcat strike action going far beyond what had been officially called.

Large numbers of workers already have mandates for lawful strike action. More unions, including the National Education Union (NEU), are due to announce ballot results shortly. NEU activists had already been talking about 1 February as a potential strike date. Every worker with a strike mandate should push their union to call them out on 1 February. There are many ways to pressure our union leaders, but we must act fast.

Workplaces can hold official or unofficial meetings to send in resolutions.
Workers can organise for everyone to call union offices or email and demand to be called out.
We can publicise petitions or group photos.
Where we can get the numbers to do so safely or win promises of no-reprisals from management, we should push for workers without a strike mandate to walk out and join them.
Unofficial walkouts would be the best possible response to the anti-union legislation.

Despite coordinating action being TUC policy, there will be arguments in many unions that taking action together on 1 February would obscure the message of their own dispute. Every dispute has its own issues and dynamics. This is not a new argument. When I worked for a major IT company we coordinated our strikes with others on several occasions: with mental health nurses, civil servants, bus drivers, housing maintenance workers, and even as the only private sector workers to join the coordinated public sector pensions strike of 30 June 2011. Beforehand, there was always some nervousness that our issues would be lost alongside bigger and more media-friendly strikes. But every time we did it, workers loved it. Coordinated action gives workers a sense of being part of a wider workers’ movement, of our shared interests and of our collective power. It built solidarity and strength. In this case we have the added arguments that most of the disputes share common themes around the cost of living, that coordinated action has the best chance of stopping the government obstructing settlements in many of the disputes, and that the threat to the right to strike affects us all.

We should push for lunchtime rallies in as many places as possible.

The anti-strike legislation is part of a wider assault on our freedoms, including the right to protest. This creates the possibility of solidarity between different groups facing and resisting state repression. Let’s do all we can to ensure the rallies on 1 February reflect that and build that solidarity.

Ian Allinson is an rs21 member, long-standing trade unionist and author of Workers Can Win! A Guide to Organising At Work, published by Pluto Press. rs21 is hosting an online reading group to discuss the book – you are welcome to join in at any or all of the sessions from 18 January to 29 March.