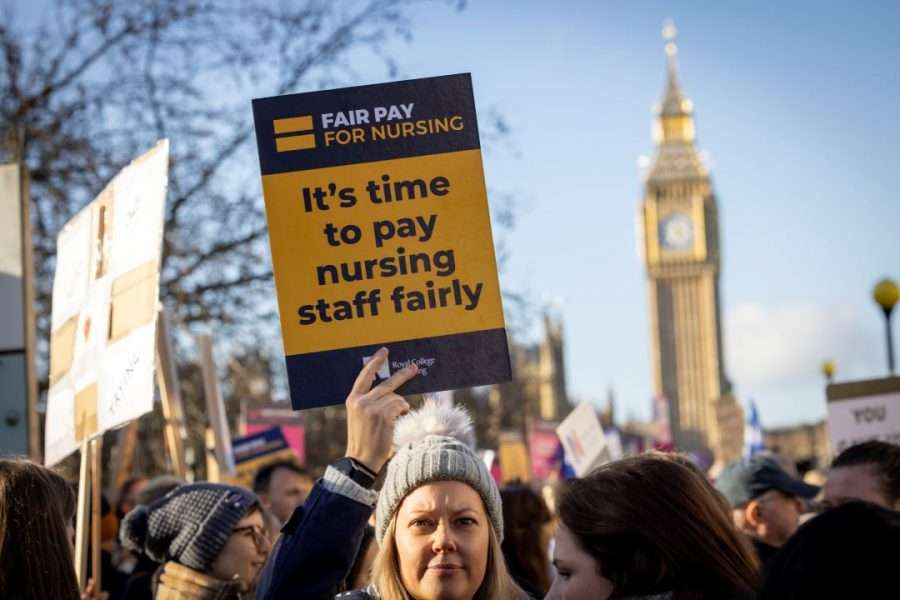 Britain’s National Health Service is in crisis, with sky-high and still-rising waiting lists and huge delays in emergency services. It’s the predictable result of over a decade of Tory-imposed austerity.

Nurses and supporters striking on a picket line outside Saint Thomas Hospital on December 20, 2022, in London. (Andrew Aitchison / In Pictures via Getty Images)

In ten years from 2000, a decade of sustained investment by a New Labour government managed to repair much of the damage done to the National Health Service (NHS) by twenty-one years of underfunding. Then, in 2010, David Cameron’s government threw that into reverse with a new decade of austerity.

That’s why the performance of England’s NHS is now the worst ever, with sky-high and still-rising waiting lists, huge delays in emergency services, and dwindling numbers of general practitioners (GPs) struggling to deliver increased numbers of appointments. Latest figures show fewer than 100,000 acute beds available and a record 96 percent bed occupancy.

It’s this lack of capacity that is causing desperate delays. In November, 37,837 patients waited more than twelve hours on trolleys in Accident and Emergency (A&E), a thirty-four-fold increase from 1,111 before the pandemic in November 2019 — despite numbers of emergency admissions almost 8 percent lower than 2019.

In England, there were more twelve-hour trolley waits in January to November 2022 (293,275) than in the previous ten years combined. Recent trolley waits have been as long as ninety-nine hours.

It was not strike action or COVID that almost doubled England’s waiting list from 2.5 million in 2010 to 4.6 million at the end of 2019, nor have strikes been the cause of the subsequent rise to 7.2 million. It was not industrial action but systematic government underfunding and lack of NHS capacity that meant 2.91 million patients had been waiting over eighteen weeks for treatment in October 2022, with 410,983 of them waiting over a year.

Shortages of staff, beds, and cash have meant key cancer performance targets have not been met since 2014. And when Boris Johnson called the general election in December 2019, more than one in five cancer patients was already waiting more than two months to start treatment.

There are also grim delays in accessing mental health care for adults and for children — with increasing use of long-distance referrals to private beds for lack of NHS capacity.

The other side of capacity is staffing: a widening gulf of unfilled vacancies, up 29 percent in a year to 133,000, including one in eight nurses, as exhausted and frustrated staff leave — some for better-paid jobs, others to escape the stress and trauma of trying to keep services going and patients safe.

The Royal College of Emergency Medicine warns the emergency delays could be costing between three hundred and five hundred people their lives per week, and ambulance chiefs have warned 160,000 patients a year are being harmed, while the Society for Acute Medicine warns the situation in A&E is “unbearable.” The NHS Confederation is now arguing the lack of capacity flows from twelve years of austerity, and the British Medical Association chair, Professor Phil Banfield, has insisted that the underfunding has been caused by a “political choice” made by this and previous governments since 2010.

Even the Tory loyalist Daily Telegraph has admitted that there was no crisis and performance was strong on waiting times and emergency care when David Cameron’s government in 2010 took control and slammed the brakes on NHS funding.

The Telegraph and other right-wing pundits predictably blame NHS management, claiming the NHS has been showered with money. Some (including Labour’s shadow health secretary, Wes Streeting) demand more use of private hospitals — despite the evidence that billions have been wasted on such schemes, especially during and since the pandemic and the harsh fact that private hospitals are no use at all for emergency care and can only gear up to treat more NHS patients by poaching more staff from NHS hospitals.

Other right-wingers and think tanks go further, to argue that the NHS model itself should be discarded in favor of (more expensive) European-style systems, of which they know little and understand less, other than that their beloved private sector plays a more central role.

Yet despite all these red herrings, a poll has found that almost three in four Conservative voters think their government is responsible for the mounting crisis in the NHS. Only 16 percent think they are running it well.

They have not been fooled by ministers mouthing empty phrases like “record funding,” which relates only to the nominal cash increase almost every year since the NHS was formed, not the real-terms value and the increases needed each year to cope with rising population and health needs.

NHS England admitted in October it has to deliver annualized savings of £12 billion by 2024–25. These cutbacks have yet to take effect. But Chancellor Jeremy Hunt’s autumn statement covered just half the projected additional £6-£7-billion inflation costs with “extra” funding.

So — irrespective of any additional pay settlement — the financial situation of the NHS will only get worse right up to and after the next election, since sadly the Labour Party that is ahead in the polls is currently refusing to promise any additional funding for the NHS.

What Can Be Done?

Right now, campaigners need to pile pressure onto Tory MPs to force their government to take steps to prevent the impending collapse of the NHS, for which they will rightly be blamed.

First, the government must acknowledge there is a crisis. A COBRA meeting should invite frontline NHS, community health, and social care managers and health unions to explain the situation on the ground to ministers and set out what financial and other support they need.

They must immediately negotiate a pay increase with NHS unions and tackle problems with the pension system.

Local and national government must meet with social care providers and trade unions to discuss measures including increased pay to address the chronic recruitment problems that have left 165,000 care posts vacant.

We must demand an emergency injection of at least £20 billion to the core NHS budget, to:

Facilitate a pay settlement and a recruitment scheme to tackle NHS staff shortages,
Prevent the need for cash-driven service cuts and closures,
Begin the most urgent of the £10-billion-plus backlog maintenance,
And reopen thousands of closed beds.

The government must lift all limits on spending on bank and agency staff until trusts have successfully filled sufficient substantive posts to ensure safe services. And all of the steps that were taken during the peak of the COVID pandemic to support staff and attempt to bring back recently retired and former qualified staff should be immediately reinstated.

People are already losing their lives to long waits, low staffing, and stretched resources. We have to act now. Without taking steps like these, by 2024, we may not have an NHS left to save.