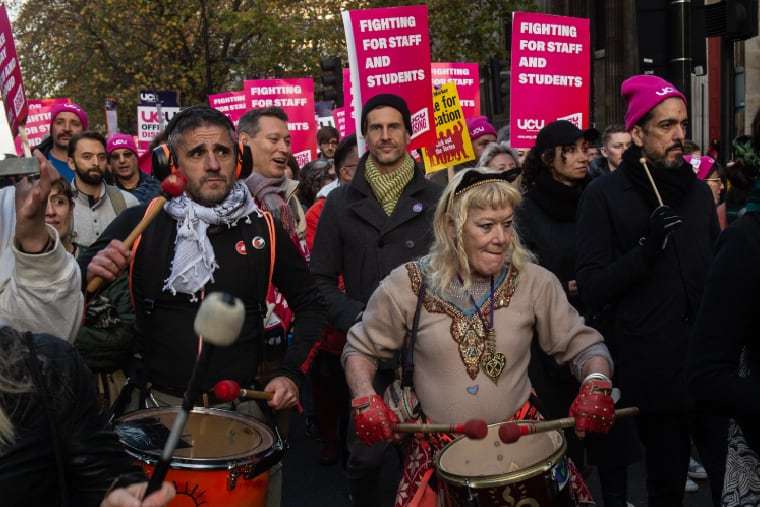 A UCU union members’ rally marked the third day of strikes at the end of last November in London (Picture: Guy Smallman)

Leaders of the university workers’ UCU union are trying to bury plans for hard-hitting action over pay, equality, proper contracts, workload and pensions.

The union bureaucracy has thrown everything at activists. Despite this, delegates representing almost a third—31 percent—of those voting did back a motion for indefinite strikes at a meeting on Tuesday.

Bee Hughes, a member of the union’s national executive, told Socialist Worker, “The vote reflected a determination to fight to win rather than to organise merely symbolic action. It is a powerful feeling that could carry us to victory if it is encouraged, widened and sustained.”

The push to use effective methods that can beat the bosses and the government is far from over.

University workers have launched repeated waves of strikes from 2018 to 2022. Although there have been real gains from action, the overall conclusion was that token action or one or two-day strikes don’t hit hard enough for a complete victory.

This was the background to the decisions made last year by the UCU’s higher education committee (HEC). This is the body empowered to take decisions about the strategy of university strikes. Its discussion was followed by UCU members voting 80 percent for strikes on a turnout of more than 60 percent.

The HEC agreed an all-out and indefinite strike from February 2023 combined with a marking and assessment boycott from the start of this year. An indefinite strike does not mean one that goes on forever. It’s one that—as used to be true of nearly all strikes—continues without stopping until a resolution.

It has been a classic example of the trade union officialdom dampening down members’ readiness to fight. She has used the most unconfident sections of the union against the most advanced, and trampled on democracy in the process.

It’s seen accusations of rigged meetings and bogus legal advice. It involved the general secretary systematically rubbishing all-out strikes and predicting they would lead to financial ruin for workers and obliterate the lives of the lowest-paid.

Grady’s first manoeuvre was to squash news of the HEC decision getting out. She claimed—without justification—that it was illegal to tell UCU members what had been decided before the employers were informed. And she insisted that the employers must not be told so early of the HEC timetable.

Then Grady unveiled the decision at a time of her choosing just before Christmas. It was backed up with a document arguing for a very different strategy of “smart” on-off strikes that are supposedly modelled on the RMT and CWU unions’ approach.

Grady seems not to have noticed, or has deliberately forgotten, that these unions have gone through many strikes spread over six months and more but have not won. Royal Mail workers have been out for 18 days, but with big gaps between bouts of action.

Grady next organised a “debate” meeting on Twitter. This supposedly open discussion saw her speak for more than half the total time. And her supporters were chosen to speak far more often than those who back indefinite strikes.

The stitch-up revolted many union members. To take one example among many, David Brenner, an academic at the University of Sussex, tweeted “I’ve been a UCU member for 9+ years. This Twitter space was my personal low point with the union. There was no debate. It was simply the general secretary’s propaganda channel on which she demolished any counter proposals to her “there’s no alternative”. Well done union democracy!”

Saira Weiner, branch secretary of Liverpool John Moores University UCU and a member of the national executive, was invited to speak. She said, “At the HEC in November we were faced with the question of how do we break through against employers that are prepared to ride out time-limited action—and win the dispute?

“Like many, many branches we decided that the only way to deal with the problem was to do exactly what Jo Grady had said we should do—to shut down the campuses in semester two. We voted for indefinite strikes. Hard-hitting action now can rock our employers and maximise the chances of coordinating with other workers who are fighting back.”

The slanted Twitter meeting took place in the run-up to Tuesday’s meeting—a branch delegate meeting (BDM). Although this was touted as a more democratic forum than the HEC, it was not allowed to debate a full range of proposals.

For example, although many union branches backed an indefinite strike, others wanted more than Grady’s plan but slightly less than all-out and indefinite. A significant number of branches wanted to strike four days a week continuously. But this, or other alternatives, were not heard on Tuesday.

Instead, Grady spread what she claimed was the legal position that four-day strikes would mean workers would lose their whole week’s wages.

In addition, there is no common method of choosing or electing delegates to the BDM.

The HEC is set to meet on Thursday. Grady supporters will argue that they have to follow the BDM and back the bureaucracy’s limited strikes. It should reject that claim. There should be a full debate of all the proposals that branches have passed, particularly all those that support a form of continuous action

And the best outcome would be a vote for indefinite, all-out strikes. That would be important for the UCU’s battle. But it would also be a beacon for all those fighting back at the moment. That won’t happen unless there is an intense push at the base of the union to make sure the HEC does not collapse in the face of Grady’s assault.

And there should be strikes on 1 February, the TUC union federation’s day of action against anti-union laws. Not every university is teaching that day, but most are, and the UCU should call them out to be part of the fightback.

An HEC member said, “We are going to keep up the fight for action that can win. It’s too important to concede to a plan that we know will be fruitless.”