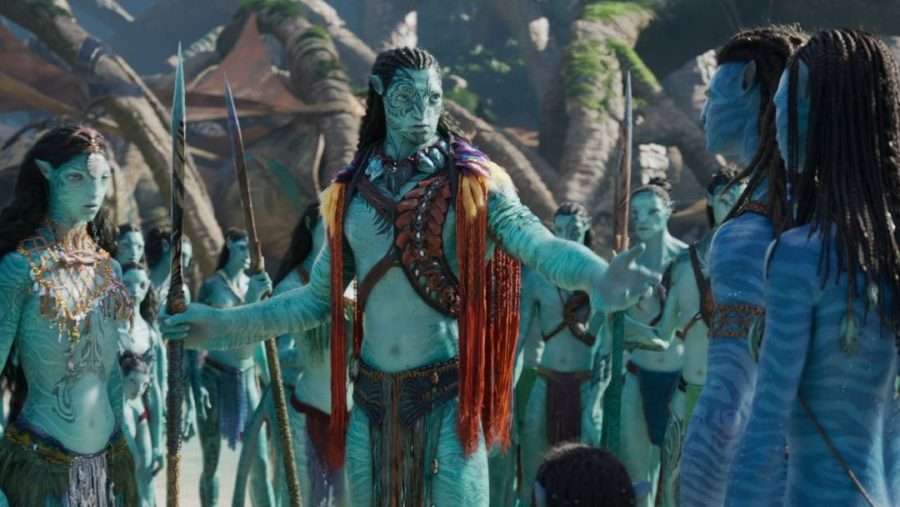 I finally saw Avatar: The Way of Water, the sequel to Avatar. It’s made almost $2 billion internationally so far. That means it’s not only on track to break even — quite an achievement considering writer-director-maniac James Cameron’s tendency to burn through immense amounts of money that could actually do some good in the world — but it’s setting all sorts of box-office records as well.

Here is my question: Why? For the love of all that is holy and cinematic, why? Why are you all going to see it? I had to go see it — in fact, I was supposed to review it ages ago, but my natural reluctance made me grateful for every possible excuse to put it off, including a deadly snowstorm that crippled the Northeast. But most of you aren’t under any kind of duress and are buying tickets willingly.

There should be a new word invented for these terrible new films that produce in the spectator an emotional combination of fury and resentment and impatience and misery as they drag on for over three hours, sucking every minute of that time. The Germans probably already have one. The literal translation in English would be something like “sickeningly long nightmare boring crap films.”

Nobody who’s just seen Babylon should follow it up with Avatar. One leans art house while the other leans mass entertainment, but both drag on for over 180 minutes and make you despair for the human race.

There should be a new word invented for these terrible new films that produce in the spectator an emotional combination of fury and resentment and impatience and misery as they drag on for over three hours.

The first Avatar wasn’t good either, but its excuse for being was its supposedly state-of-the-art digital imagery. The sequel has no such excuse — it’s the same blandly unmemorable adventure saga, only slicker; this time, about the human military trying to colonize a pristine planet for its natural resources, with the plan of conquering the indigenous creatures in the process.

It’s still celebrating the same insipid, pastel-colored Noble Savage Neverland as the first one, only this time the cornflower-blue Na’vi “forest people” we follow are largely supplanted by the aqua-colored Metkayina ocean people. But they share the same tendencies toward supermodel bodies, cute snarls, and new age nonsense double-talk about oneness with nature, which makes the tension between them and Jake Sully’s (Sam Worthington) newly arrived blue family, refugees from the renewed attacks of the “sky people,” unforgivably mild.

They’re remarkable films for the way they evoke Important Issues — imperialism, colonialism, racism, sexism, ransacking the environment for commodifiable resources — in the silliest, shallowest way, while still remaining so fundamentally old-fashioned they often sound like something out of a 1950s movie. Sully stomps around repeatedly intoning, “A father’s job is to protect,” while female characters are allowed token “mama bear” scenes of ferocity. Cameron and Kate Winslet are making the rounds bragging about the importance of her character, Ronal, the pregnant free diver of the Metkayina and wife of the chief, as if a pregnant-warrior fantasy character strikes some tremendous blow for women’s equality everywhere.

The main cast has returned for this giant payday, of course. Zoe Saldaña as clan chief’s daughter Neytiri who becomes Jake’s mate; Sigourney Weaver as Kiri Sully, daughter of Weaver’s former character, scientist Grace Augustine; Stephen Lang as vengeful military loon Colonel Miles Quaritch, killed by Neytiri in the last film but now back as a “recombinant,” because nobody ever dies permanently in these damn films; and reprising their smaller roles are CCH Pounder and Giovanni Ribisi. New stars in the sequel include Winslet, Edie Falco as a general barking orders, and Jemaine Clement as a marine biologist working for the military and beginning to think he doesn’t much like attempted massacres of sea life on an hourly basis.

Critics are claiming that, in spite of its flaws, the film is a visual feast, a sensational spectacle that truly wows. Here’s one such summing up:

Despite its myriad deficiencies, I have to cheer at the arrival of Avatar: The Way of Water, 13 years after the first installment left me so mad in that multiplex. Its plot is hacky; it’s got some really clunky characters; the dialogue is, at times, unthinkably stupid. (“The way of water connects all things” is the kind of line that sounds profound until you really think about it.) But this new Avatar filled an awe-shaped void in my heart, and for that, I thank James Cameron.

Baffling! There used to be critical complaints, in ages past, that even the greatest Disney animated films were, in the end, a series of slick, cutesy sentimental commodities with creepy, sanitized visions of nature, and Disney’s stuff was brilliantly inventive, tough-minded, unsparing realism compared to this dreck.

Here’s a sample of some typical dialogue in Avatar 2, during the interminable chase-and-fight scenes that take up much of the film, as the madly militarized “sky people” hunt down the family of Sully, the former marine who switched sides in the big battle when he achieved enlightenment among the Na’vi:

For the wise adages of the creatures who are one with nature, we have not only “The way of water connects all things” but also “Sullys stick together.”

My whole sense of this sequel to the 2009 film when its imminent opening was announced was: “Who wants to see a sequel to Avatar? That’s so passe, it seems like it happened back in 5000 BC, and it wasn’t particularly interesting then.”

But now, with the success of the sequel, Cameron is crowing about how this bland franchise he’s created that’s supposedly saving cinema will go on and on till climate catastrophes mercifully put an end to a suffering humanity:

The point is we’re going to be okay. I’m sure that we’ll have a discussion soon with the top folks at Disney about the game plan going forward for “Avatar 3,” which is already in the can — we’ve already captured and photographed the whole film, so we’re in extended post-production to do all that CG magic. And then “Avatar 4” and “5” are both written. We even have some of “4” in the can. We’ve begun a franchise at this point. We’ve begun a saga that can now play out over multiple films.

You see what you inflict on us all with your indiscriminate ticket-buying excesses?