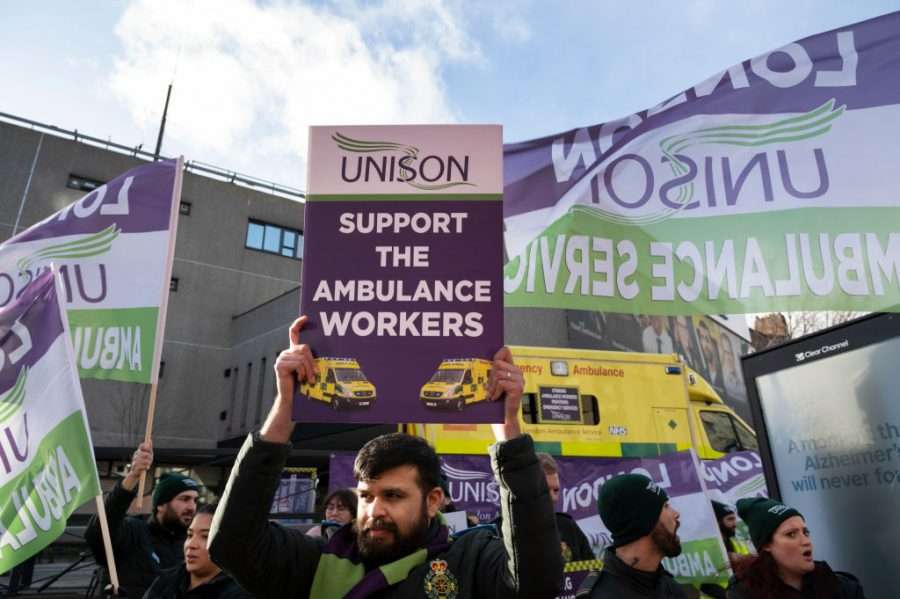 The UK’s Tories are proposing legislation that would make trade unions force their own members to cross picket lines during strikes to avoid lawsuits or being fired. The laws threaten to render strikes ineffective and bankrupt unions.

After the biggest fall in living standards on record, 2022 saw workers strike in numbers not seen for decades in the UK. From nurses to trash collectors, from postal workers to railworkers, working people found inflation eating away at their wages, leaving them unable to pay energy bills or put food on the table. And in response, they walked out.

Rather than address the cause of this strike action — low pay and the cost-of-living crisis — the government has instead launched the greatest attack on trade unions in a generation.

If the Minimum Service Levels Bill, introduced to parliament this week, becomes law, it would force workers across six sectors of the economy — health, education, fire and rescue services, transport, nuclear decommissioning, and border security — to provide a “minimum service level” during strikes. In practice, trade unions would be forced to send their own members to cross picket lines to avoid legal action or the sack, potentially rendering strike action ineffective entirely.

Trade unions are gearing up for the fight of their lives. Here are ten reasons why you should join them.

When a worker goes on strike, there are legal protections preventing their employer from punishing them. In Britain, this forms the legal basis for strike action. The Minimum Service Levels Bill would strip away these protections, meaning that any employee who disobeys an order to work during a strike could be fired.

Because the bill targets the public sector, it is those who risked their lives throughout the pandemic to keep the country running — railworkers, nurses, teachers, firefighters and others — who face losing their jobs. For nothing other than demanding fair pay and refusing to cross picket lines to undermine action taken by their colleagues, the country’s essential workers will be put on the dole.

2. Trade Unions Could Be Bankrupted

Just like individual workers have protections against their employers from punishing them for withdrawing their labor, trade unions are afforded protection from legal action when their members go on strike. The bill will strip away this protection, allowing bosses to sue trade unions for any losses incurred during strike days if they are judged not to have done enough to make selected workers comply with orders to work.

This would expose trade unions to lawsuits that could bankrupt them, meaning trade unions sued into oblivion. For a government that sees trade unions as an enemy to be defeated, this may be part of the appeal of the Minimum Service Levels Bill.

3. Britain Already Has the Toughest Anti-Union Laws in Europe

British workers already face some of the most restrictive laws on trade unions in Europe, with much higher barriers to taking strike action than in comparable countries. The result is that they work longer hours and receive lower pensions than their European counterparts, and also lack many of their rights and protections.

The government seems to believe it’s too easy for workers to strike, and attempts to portray industrial action as the product of a strike-happy few intent on causing chaos. The reality is that no worker wants to go on strike — it’s a last resort, taken at a financial cost, with that desperation evidenced by workers beating some of the strictest thresholds in the Western world to do so.

The reason workers are being pushed to strike is that in the face of a spiraling cost-of-living crisis, they have no other option. No amount of tightening the screws on trade unions will change that.

4. It Will Keep Wages Low

A combination of low wages and spiraling inflation means that British workers are currently experiencing the sharpest fall in living standards on record. Real wages are lower now than in 2010, down by an average of 5 percent, leaving people £1,600 a year worse off than they were thirteen years ago. For workers in the public sector, the situation is even worse: nurses are earning £5,000 a year less in real terms than they were in 2010.

These recent drops in wages are, however, part of a longer trend, which has seen real wages fall since the 1980s as a consequence of Margaret Thatcher’s attacks on trade unions. Indeed, the declining share of wages as a proportion of national GDP is mirrored by the fall in trade union membership: when trade unions are weakened, wages stay low, and inequality increases. Strikes and the threat of strikes are the best leverage workers have against bosses, so weakening their effectiveness helps ensure workers keep being denied the pay raises they deserve.

5. There’s No Minimum Service Required of the Government

For anyone who has used Britain’s public services in recent years, the government’s claim that it is introducing the bill to “maintain a basic function and deliver minimum safety levels” seems like a joke. The legacy of years of underfunding and privatization is a country in which almost no public service works as it should. Patients are dying in the hundreds because emergency room waiting times are not met, the railway is at its least reliable since records began, teachers are struggling with oversized classes and are feeding children who come to school hungry. But the train companies or government ministers responsible get off scot-free.

A government that is presiding over this status quo with no serious plan to fix the problems it has created clearly does not care about providing a minimum level. Their concern for the disruption caused to the public is insincere and opportunistic, only arising on strike days and ignored the rest of the time. If workers are to be required to provide minimum service levels on strike days, why aren’t ministers and bosses the rest of the time?

6. Public Services Will Get Even Worse

In what is left of those public services, meanwhile, workers and our trade unions are the last line of defense. As much as workers are fighting for their living standards, they’re fighting against the government’s efforts to deepen the cuts, privatizations, and “reforms” eating away at the services that keep us moving, or healthy, or safe.

Health care workers, for example, are striking against pay so low that it has created a staffing crisis in our National Health Service (NHS), causing one in nine nurses to leave the profession in 2022, up to five hundred patient deaths each week in the emergency department alone, and hospital corridors transformed into makeshift wards. The anguish expressed by burnt-out health care workers at being unable to provide the care their patients need stands in stark contrast to the government’s heatless denial. The story on the railway is similar, with rail unions standing against plans to de-staff trains and stations, close every ticket office, and slash maintenance works by half, which would make the railway inaccessible for disabled passengers, endanger travelers, and risk fatal crashes.

Attacking the right to strike would hamstring not only workers, but the services to which they are dedicated and on which we all depend. For that, we will all suffer the consequences.

The right to withdraw one’s labor is a fundamental liberty, at least as important for a free society as the right to protest and the right to free expression. Democracy doesn’t only mean voting in elections every five years — it means having a real say in our day-to-day lives. It’s in the workplace that we spend most of our waking hours, and trade unions are our democratic representatives at work.

By weakening trade unions, bosses will be empowered, and workers will lose their voice and have little say over their pay, terms, and conditions. And with the Tory government increasingly willing to display its authoritarian colors in recent years, if this fundamental right is lost, who knows which ones may be next in the firing line?

The threat to those liberties is all the larger given the vital role trade unions have had in winning them over the decades. Exercising one’s democratic right to withdraw one’s labor is the very foundation of working-class organization, part of a proud tradition of British radicalism spanning from the Diggers to the Chartists to the Tolpuddle Martyrs, through which working people fought for and won many of the rights and protections we enjoy today.

Trade unions won us annual leave, sick pay, the two-day weekend, the eight-hour day, health and safety protections at work, and much more. We need strong trade unions not only as a right in themselves, but to protect the rights we already have, and to fight for more. By attacking the right to strike, and by extension the trade union movement, the government puts all this at risk.

The chances are that the bill will fail even on its own terms. The government’s internal impact assessment found that imposing minimum service levels could actually lead to an “increased frequency of strikes”; because strike action will be much less effective, workers will have less leverage at work, meaning disputes are less likely to be resolved to their satisfaction, and strike action will drag on.

The new laws, if passed, are also likely to increase the frequency of industrial action short of strike action, like work-to-rule, where workers follow official working rules and hours exactly, choosing not to do overtime or other noncontractual work. In industries like the railway, which effectively run on overtime, the effects would be debilitating. The same goes for the NHS and our schools, which would be disrupted more over a longer period than they would be by a few days of strikes. And by removing legal options to strike, wildcat strikes — a form of unofficial industrial action — will be made more likely.

For these reasons, the Transport Secretary admits the new laws won’t work, and the Education Secretary doesn’t want them. It seems that many inside the government recognize that public services are the likely casualty of an ideologically motivated attack on the right to strike.

10. The Rights of All Workers Are Under Threat

The Minimum Service Levels Bill is an expanded version of a similar piece of legislation the government initially intended to pass targeting only transport workers. But as the cost-of-living crisis deepened and workers from across the public and private sectors walked out over pay and conditions, the legislation has been redrawn to include vast swathes of the public sector. Even then, the bill itself is vague, giving government ministers a frightening amount of power to decide how and to whom the new laws will be applied.

In thirteen years of Tory rule, numerous pieces of anti–trade union legislation have been passed. The Minimum Service Levels Bill is only the latest attempt to neuter the power of workers, and there’s no reason to assume it will stop there. The government has placed those in a select few industries in their crosshairs, but if they’re allowed to attack the rights of some, they’ll soon be coming for the rights of all.

This bill must be opposed not only because we wish to defend the rights of the workers it targets or the services they work in, but because if it succeeds, it will be your rights next.