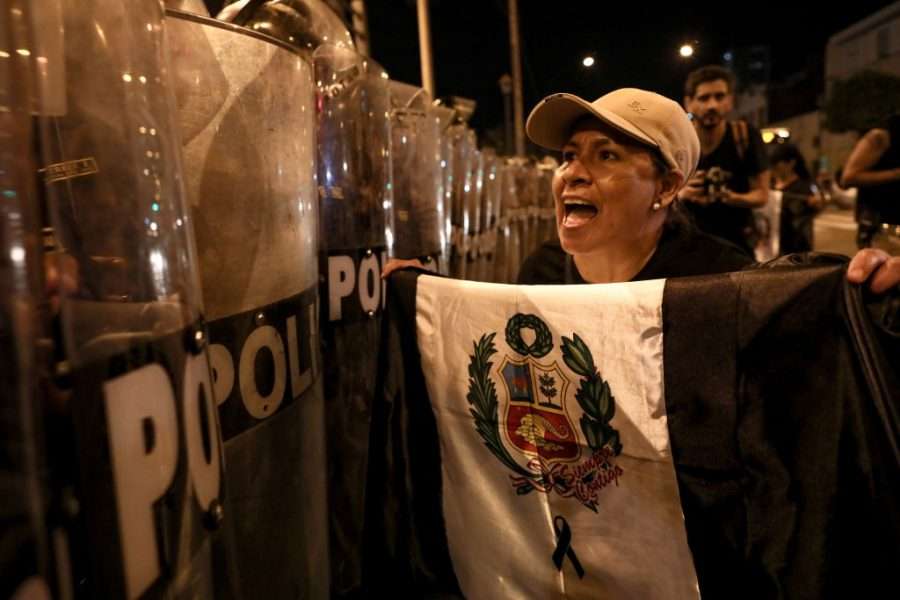 Protests in Peru following the impeachment of Pedro Castillo show no signs of letting up. In the face of lethal repression, protesters are no longer just demanding elections but the resignation of President Dina Boluarte and a new constitution.

Hundreds of people participate in a new march against the government of Dina Boluarte in Lima, Peru on January 12, 2023. (Klebher Vasquez / Anadolu Agency via Getty Images)

On December 7, Peru’s Congress was scheduled to vote on the impeachment of President Pedro Castillo.

It wasn’t the first time. It was the third attempt at impeachment, one of so many mechanisms employed by Congress, elites, and the press to delegitimize Castillo and remove him from power. That same day, Castillo shocked the country with his response: a message to the nation in which he declared the dissolution of Congress.

Castillo’s desperate maneuver wouldn’t find establishment support. The federal police and armed forces quickly turned their backs on Castillo, arrested him, and handed him over to the attorney general, while Congress rushed through the scheduled impeachment and the swearing in of his vice president, Dina Boluarte. The latter had already broken off relations with Castillo weeks earlier. Heading off toward Congress — the country’s most disgraced and despised institution — and ignoring those already taking to the streets to call for elections, she announced that her government would complete its term in 2026.

In the following days, Boluarte cozied up to Castillo’s political opposition, including those who never accepted the former president’s electoral victory. In the face of these rapidly developing events, the people responded swiftly. They organized mobilizations in most regions of the country, rejecting Boluarte, calling for immediate elections and the closing of Congress, and even raising demands for a new constitution. The government reacted by militarizing the streets. A state of emergency was declared, bringing the army to various regions even though it was not prepared to contain civilian protests in any measured way.

Although Congress approved moving elections up to 2024, that date remained far from the demand for immediate elections, and the protest wave grew stronger still. The police and government reaction was disproportionate and violent. By December 21, the number of dead had reached twenty-seven, many the result of gunshot wounds to the head and body.

Even with this level of violence, Boluarte decided to award the position of prime minister to Alberto Otárola, who until then served as the minister of defense — in charge of the armed forces and responsible for the civilian deaths they caused. Under these adverse conditions, the protesters, without walking back their demands, temporarily suspended protests for the holidays to honor their fallen and allow for economic activity to resume in their towns and cities.

But police operations wouldn’t remain limited to the protests. Social leaders and members of the political opposition became targets of police persecution, with raids in various locales involving arrests without the presence of a representative of the district attorney. They even carried out a threatening visit to the home of a congressmember.

The government of Boluarte, now recognized by many as a civic-military regime, at the same time attempted to delegitimize the protests, a project supported by the mainstream media, owned by Peru’s economic elite. In her statements, she maintained that the protests were led by terrorists or by criminals in defense of their illicit economies.

Amid these accusations and the murder of protesters, the military and police — the institutions responsible for the deaths — called for counterdemonstrations “for peace” to reinforce their narrative of a violent enemy. This contradictory concept of peace put forward by the government was mostly dismissed as empty posturing.

As the days went on, video and photo evidence piled up implicating law enforcement, which had fabricated evidence against protesters and infiltrated marches to incite violence. All this further battered the legitimacy of the police and of Boluarte, who failed to condemn the violent overreaction of the former despite the overwhelming evidence being circulated.

In the New Year, on Wednesday, January 4, protests resumed in the capital and other regions, with large mobilizations, work stoppages, and the barricading of highways. The demands remained firm, calling for the resignation of Boluarte and delivering a forceful message: citizens taking to the streets would not recognize the legitimacy of a government they considered stained by blood, one that accused them of being terrorists and would rather send soldiers to shoot up their cities and towns than send government officials to speak with them.

Then, on Monday, tragedy struck once again. The violent repression of demonstrations in Puno, in southeast Peru, carried a death toll of eighteen. Among those killed was a doctor who wasn’t even participating. Videos confirmed the brutality of the police response in what became the second massacre — following that of Ayacucho, where ten were killed in a single day — perpetrated by the current government.

No End in Sight

The uprising that began in December, and that to this day accounts for forty-seven deaths and more than five hundred injured, shows no end in sight, despite the government’s efforts to paint the temporary suspension of protests during the holidays as a “return to calm” afforded by its actions.

The civic-military government of Boluarte has allied itself with those segments of the population that lost the 2021 elections. Their government representatives take to discredited elite media outlets to make appeals for peace that ring as cynical as they do hollow. The “peace” that Boluarte speaks of consists of amnesty for her government, despite its abuses and killings, and a return to a stability that never benefited the majority.

Boluarte appears ignorant of the fact that the pain for those killed — and the desire for justice it produces — has become another reason to mobilize. The protests are no longer just about demanding elections but about people demanding her immediate resignation and a new Peruvian constitution. The very conditions of Peru seem to scream, to paraphrase Emiliano Zapata, that if the people don’t get justice, Boluarte’s government won’t get the peace it’s asking for.